A small town in south-central Uttar Pradesh- Ayodhya. The city lies on the banks of River Sarayu, located east of Faizabad. The city is one of the most important pilgrimage sites of the Moksha Dayini Sapta Puris. From the holy waters of the river Sarayu to the Vaishnavism beliefs, the city Ayodhya has seen a glorified past, and the religious and mystical tales surround the town.

The Hindu legends assert that the mythical man, Manu, founded the city. The ancient town of India is fondly counted among the seven sacred cities of the Hindus. As most of us are well aware, the city stands in association with the Indian epic Ramayana. The mighty god Rama took birth in this town. The town prospered as the capital of the Suryavanshi dynasty under lord Rama.

It is a strong pilgrimage place in India, and even if there are religious conflicts in the city, the essence of spiritual hunger is still intact. The historical text Atharva Veda mentions Ayodhya as a city built by gods and as prosperous as paradise.

Other than the Hindu religion and Hindu scriptures, the beliefs- Jainism, Buddhism, and Islam- recognize the town in their religious past. Jainism regards Ayodhya as the birthplace of five Tirthankaras, one being Adinath.

Considering the traditional history and primary sources, the town, Ayodhya, served as the capital of the kingdom of Kosala till the advent of Buddhism in the 6th century. The city saw the reign of various prominent kings. Raja Ikshvaku, Prithu, Mandhata, Harishchandra, Sagar, Bhagirath, Raghu, Dashrath, and Rama.

Historians agree on the point that Saketa town is identical to Ayodhya. The city was often visited by Buddha and later became an important Buddhist centre. The Chinese Buddhist monk Faxian visited the town in the 5th century, and his travelogue mentions the presence of nearly a hundred monasteries in Ayodhya.

Ayodhya, called Oudh in the 11th and 12th centuries, saw the dawn of the kingdom of Kanauj under its clutches. Oudh later became a part of the Northern spread of the Delhi Sultanate. In the 16t century, the Mughal Empire took over the prosperous town. Subsequently, the city tasted independence after fighting its way out of Mughal rule. But became subordinate in 1764 to the British East India Company.

The town got annexed by the British in 1856. The ground for this annexation was the Doctrine of Lapse and alleged internal misrule. This raged the land revenue receivers, along with the common masses of the town, and this hot zeal sprang up the Indian mutiny in 1857. Oudh joined the Agra presidency in 1877 and formed the Northern-Western Province, later termed as the United Province of Agra and Oudh. This later developed into what we now call Uttar Pradesh.

The town has seen a lot of ages, including the prosperous times and the period of destruction. Despite this, many historical monuments still thrive on the soil of the town, enhancing its glory. 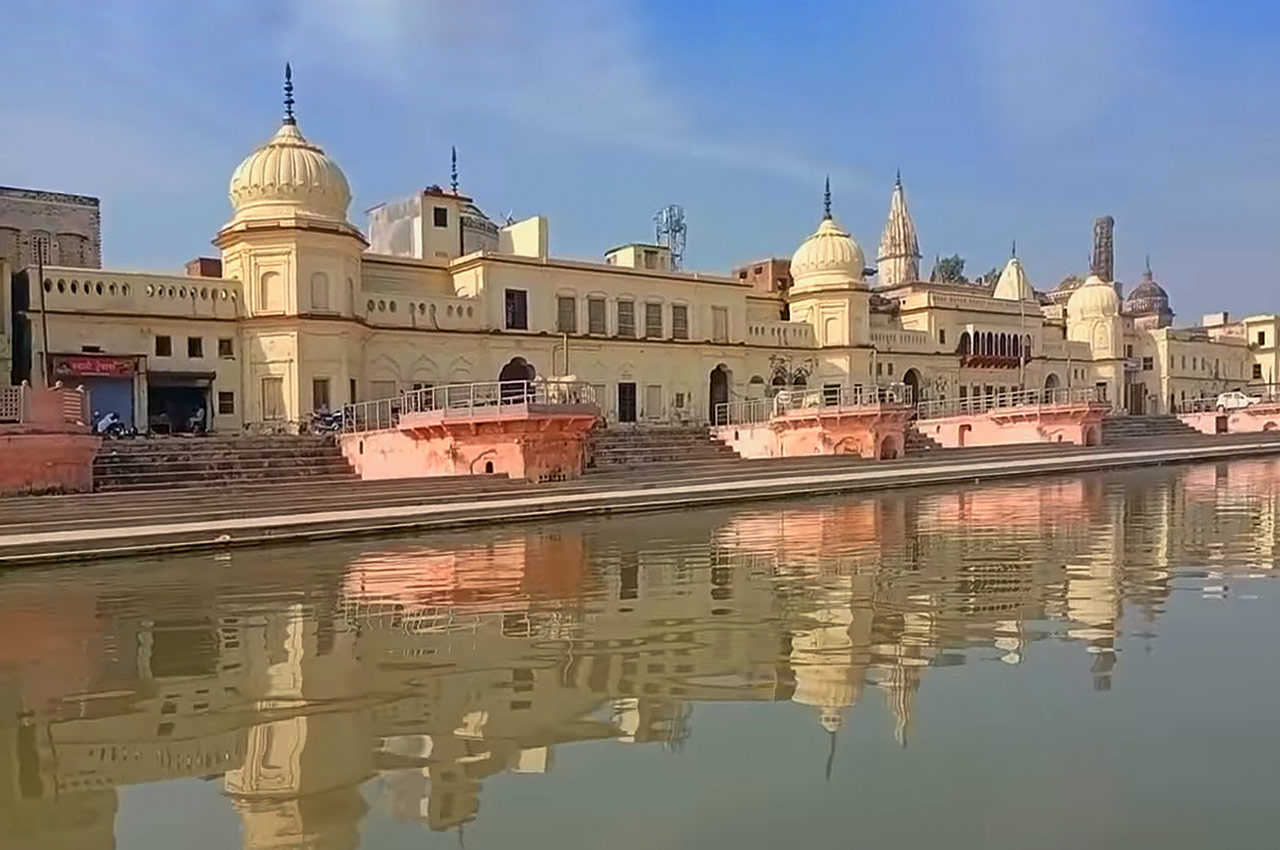 The ghats on the Sarayu river are one of the best views of the city. The ghats, constructed in the early 19th century, are a part of great marvels built under the patronage of Raja Darshan Singh. The riverbank has a lot of temples. These lavishing temples stand dedicated to the pair Sita-Rama, and some are also dedicated to Narasingh. Further, the shrines of Chakrahari and Guptahari enhance the beauty of the town.

It is the principal place of worship of Lord Rama in India, and Ramkot stands on an elevated ground in the city. The monument present in the western part of this religious town is famous for holding various festivities related to Lord Rama.

The beautiful palace in Ayodhya, built by Vrishbhanu Kuvari. The Queen of Teekamgarh built this palace in 1891 to tribute Lord Rama and his ardhangini Sita Ji. Today, a lot of devotees worship the place as Sone-Ke-Ghar Mandir. Lord Rama’s stepmother Kaikeyi gifted this palace to Rama and Sita as a wedding present by the tales.

This is one of the most famous shrines of Ayodhya. Lord Hanuman is the most prominent follower of Lord Rama, and the love and respect for Lord Rama in Hanuman’s heart doesn’t need any elaboration. This massive fort is a tribute to Lord Hanuman.

One of these is the Babri Masjid which we might have seen in the news quite frequently. Today, a hot topic of debate, the masjid, built in the 16th century by the Mughal emperor Babur, was an abode of Allah and serene calm for his followers. However, the masjid got demolished after 1992 due to the riots preceding Ram Janmabhoomi.

Other places such as Nageshwarnath Temple, Treta Ke Thakur, Choti Chawni, and Tulsi Smarak Bhawan are tourist attractions. Many devotees visit Ayodhya each year to rejuvenate their faith in the almighty.

Since the times of Nawabs, the town has strived to keep alive its rich heritage and traditional ties with the past. Tomb of Bahu Begum, Gulab Bari and Moti Mahal Masjid are among these preserved monuments.

The city is always in its cheerful zone, with fairs and festivals springing up throughout the year, bringing in the new faith. The city’s most celebrated festivals include Deepotsav Ayodhya, Ram Navami Mela, Shravan Jhula Mela, Rama Lila, Antargrahi Parikrama, Chaturdashkoshi Parikrama. Most of the festivities revolve around Lord Rama. So do the cultural and traditional practices of the population in the city.

South Korea, too, shares a relationship with the city. According to chronicles, princess Hwang-ok, the queen of one of the most prominent dynasties of Korea, was the daughter of a traveller from Ayodhya. The love saga of the Indian princess and King Kim Suro of the Kara dynasty is viral in Korea. In March 2001, South Korea declared Gimhae city and Ayodhya as sister cities.

Nepal is also given prime importance when we refer to Lord Rama, and this becomes the focal point of interaction and serving toes between the city of Lord Rama and Nepal. In November 2014, Jankapur city of Nepal became a sister city of Ayodhya.

It is highly speculated the cities of Yogyakarta in Indonesia and Ayutthaya in Thailand got their names after the town of Ayodhya.

Ayodhya is one of the country’s holiest cities, which got recognition within the country and abroad due to its marvellous past, knit together with mysticism and factual history. The city’s name describes its nature. The term Ayodhya comes from the Sanskrit term Yudh meaning war, preceded by a prefix ‘a’, making the meaning of the term invincible. The town is genuinely unbeatable in terms of its cultural manifestation, traditional spirit, and cheerful vibe.