The Historical Ruins of Nalanda: Exploring the Ancient University’s Architecture and Philosophy 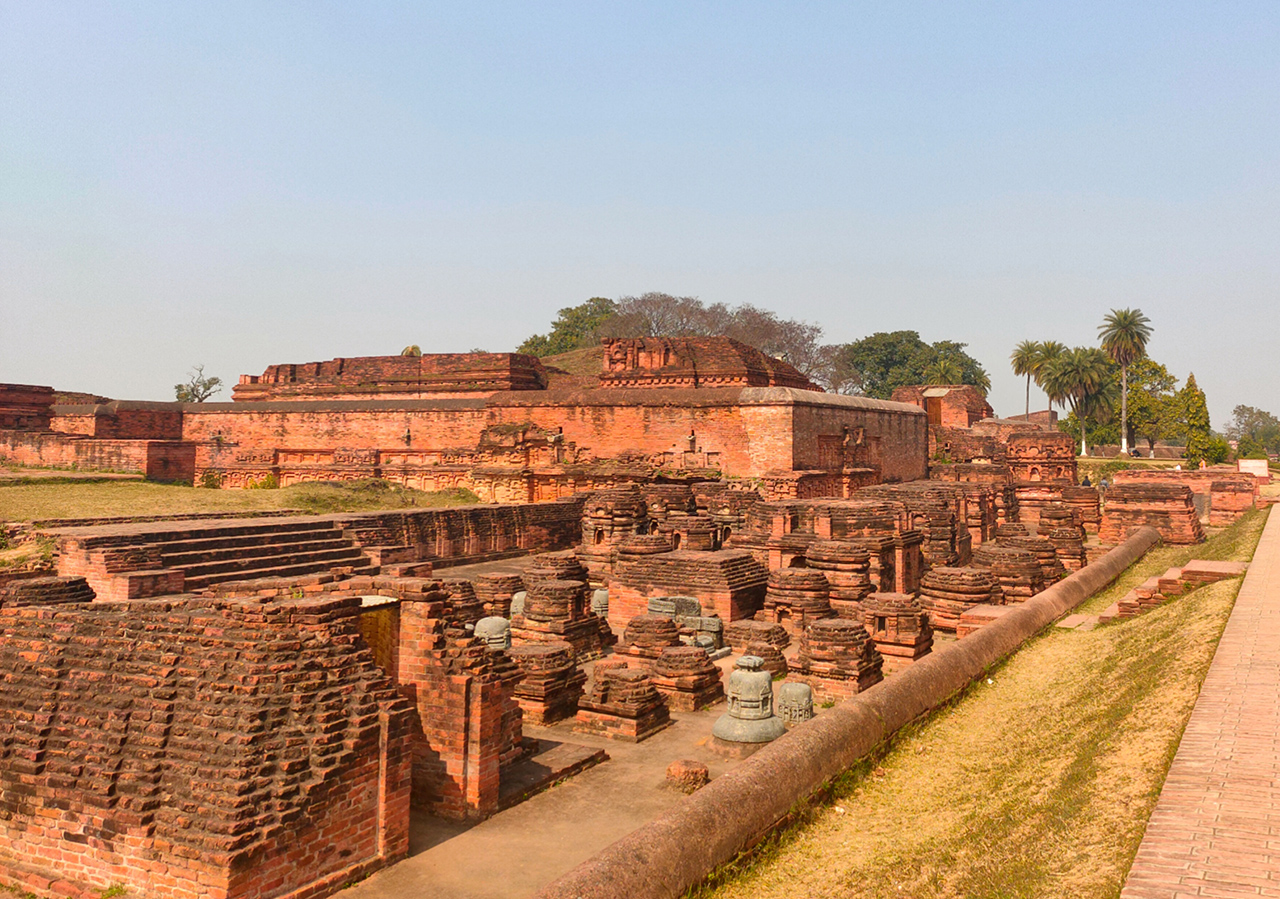 The Nalanda trip was my first experience with Bihar. My college fest had ended, I needed a break, and the “let’s go somewhere” idea of my friends, made us catch the 2:30 AM train from Varanasi to Nalanda. I had read about the ruins of Nalanda in my history textbooks in school but hadn’t heard anything about the place after that. I didn’t Google a single thing before embarking on the trip. I wanted to surprise myself and indeed, I got my first one next morning at Nalanda junction.

Perhaps, we stopped at some outer area of the junction, but there was no bridge to cross the track, open fields spread out for kilometers and kilometers, small mud-brick houses, and an isolated railway junction. We crossed the railway track with some local ladies and a narrow route going between the small houses, took us to the highway.

I’ve been to numerous historical places, like Delhi but it was nothing like the capital, at first sight. Fortunately, a well-constructed road and a rickshaw took us to our destination, “The ruins of Nalanda”. 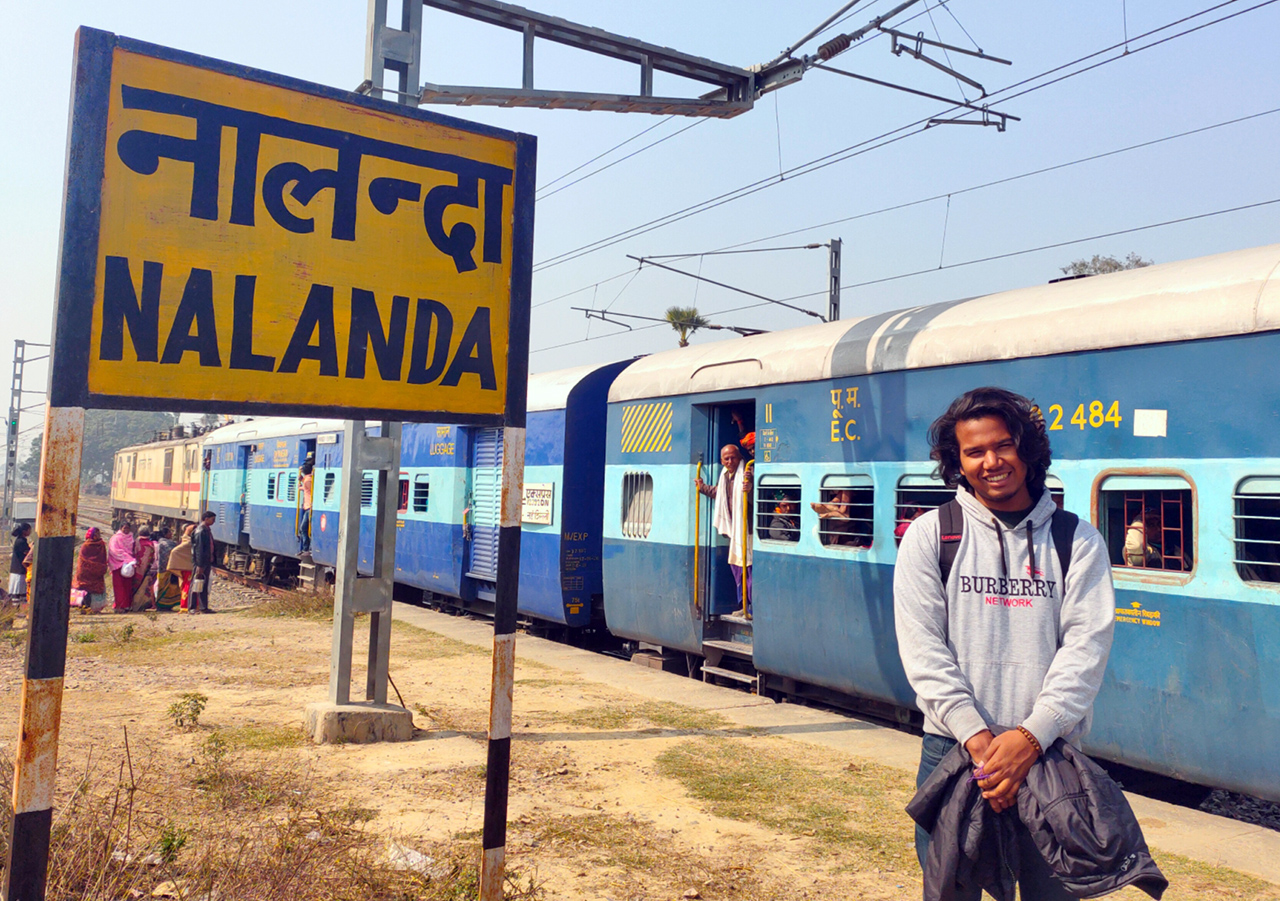 To my extreme amusement, a friend of mine wondered that since it was not a Sunday, there must be some students and a crowd on the University campus! We all couldn’t help but laugh at his innocence.

So, if you are also like my friend who thought that Nalanda University is housing students and academic facilities, let me tell you that, Nalanda was a prestigious center of learning from the 5th century CE to 12th century CE, often acknowledged as “the first residential university of the world with 10000 students and 2000 teachers residing in the campus”. It was a famous Buddhist monastery, where thousands of Buddhist monks used to live, learn, and practice their religion. It rose to its legendary status due to the emerging power of the Indian subcontinent and its influence on the world. 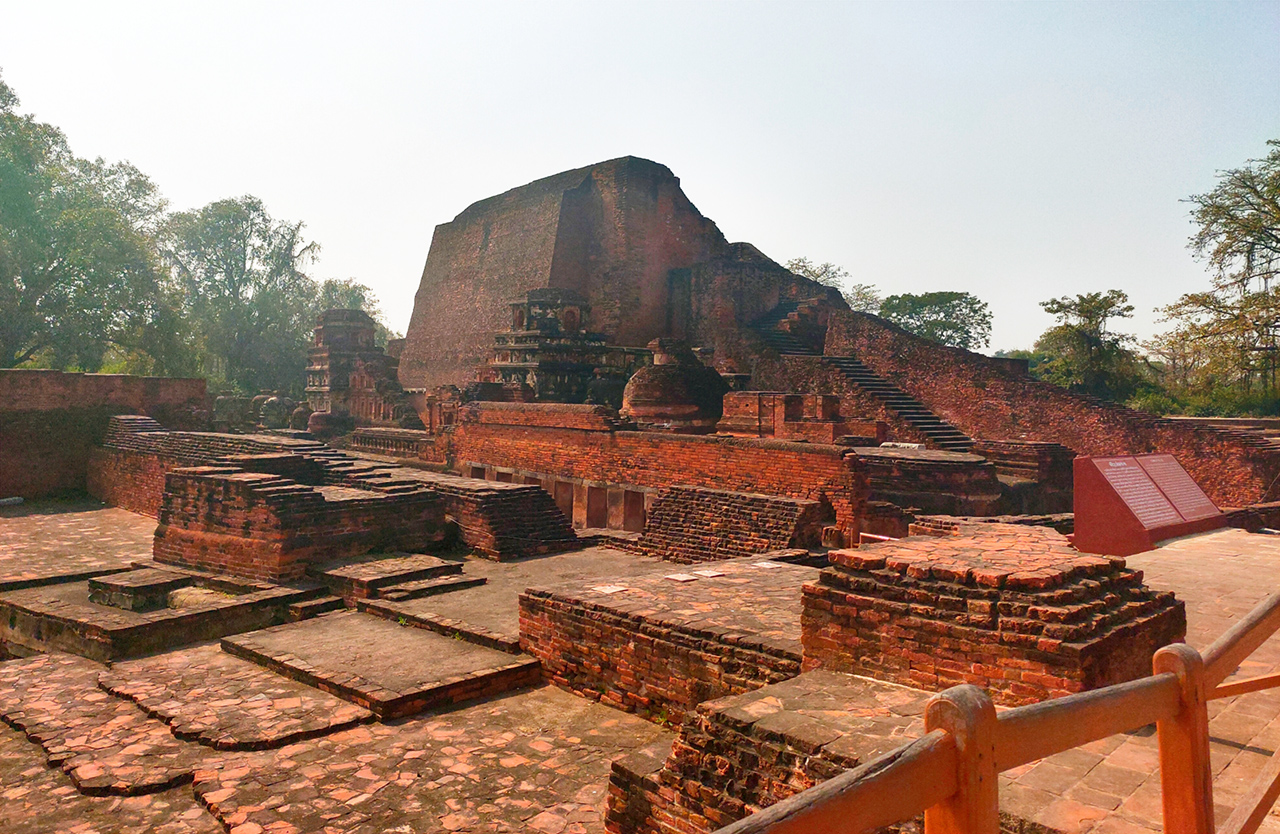 For travellers who have a thing for historical ruins or architectural masterpieces of our past, Nalanda is a must-visit. The beautiful architecture and history behind it, provide a sense of belonging and splendour, which is unique to this place.

The grand complex (believed, that a large part is yet to be excavated) contains red-bricked monasteries, stupas, temples, classrooms, and hostels of the past.

Every brick of the majestic architecture makes you wonder about how it would have been filled with so many students a millennium ago, and what kind of knowledge, teachings, and lifestyle would have been in practice here. It is believed that students at Nalanda used to learn texts of Buddhism, Vedas, logic, Sanskrit grammar, theology, philosophy, law, astronomy, and even city-planning.

The university flourished, as an establishment, under the rule and patronage of the Gupta Empire and King Harshavardhana of Kannauj. It attracted scholars and Buddhist monks from various kingdoms, and foreign nations like China, Korea, Tibet, Japan, Indonesia, Persia, and Turkey. It is believed that there existed a large library in the complex with hundreds of thousands of volumes of manuscripts. These manuscripts were not only religious, but they also contained texts on grammar, literature, astronomy, astrology, etc.

The university saw its downfall in the 12th century with Turkish invasions and gradually, its buildings were ransacked and set on fire. Many of its monks and scholars were killed, and the rest of them fled the campus. 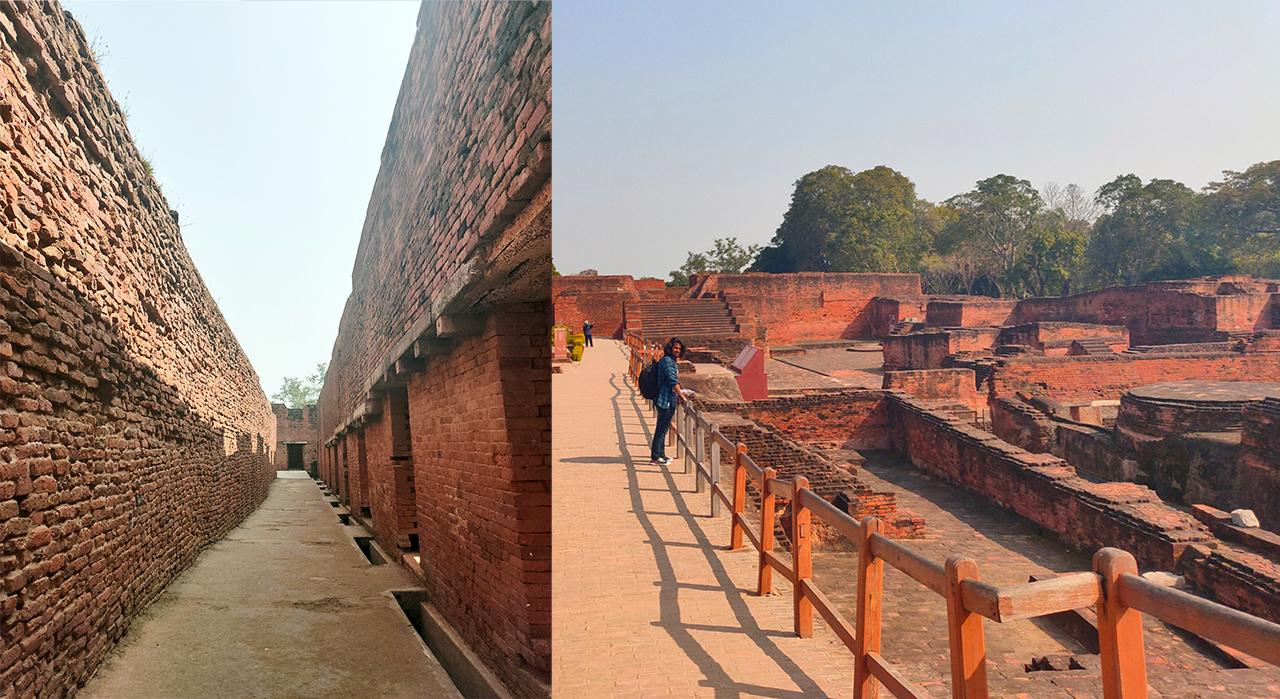 There are a lot of legends and theories about the destruction of such a prominent site of knowledge, education, and learning. Even today, many buildings and sites have a sign of damage by fire displayed on them. According to a popular legend, when the invaders set the great library on fire, it kept burning for 3 months because it had around 9 million manuscripts at that time! It is thought that the demise of Nalanda, was somewhat predicted by the slow decaying of Buddhism in India. The slow disappearance of Buddhism in the region served as a premonition to the forthcoming demise of Nalanda.

Now, the complex contains ruins of its glorious past. The vast remains of Nalanda expand around 1600 ft. north to south, and 800 ft. east to west. The red-bricked monasteries and temples, pathways, and compounds keep the magnificent history of such a beautiful and prestigious place alive. Even some of the manuscripts that were saved by the fleeing monks, live on today in various museums and cultural centers across the world.

Nalanda museum is located near the site that contains hundreds of excavated artefacts. Near the ruins, there is a temple of the Black Buddha, where a black-coloured sculpture of Gautam Buddha, which was also excavated from the site, is placed. 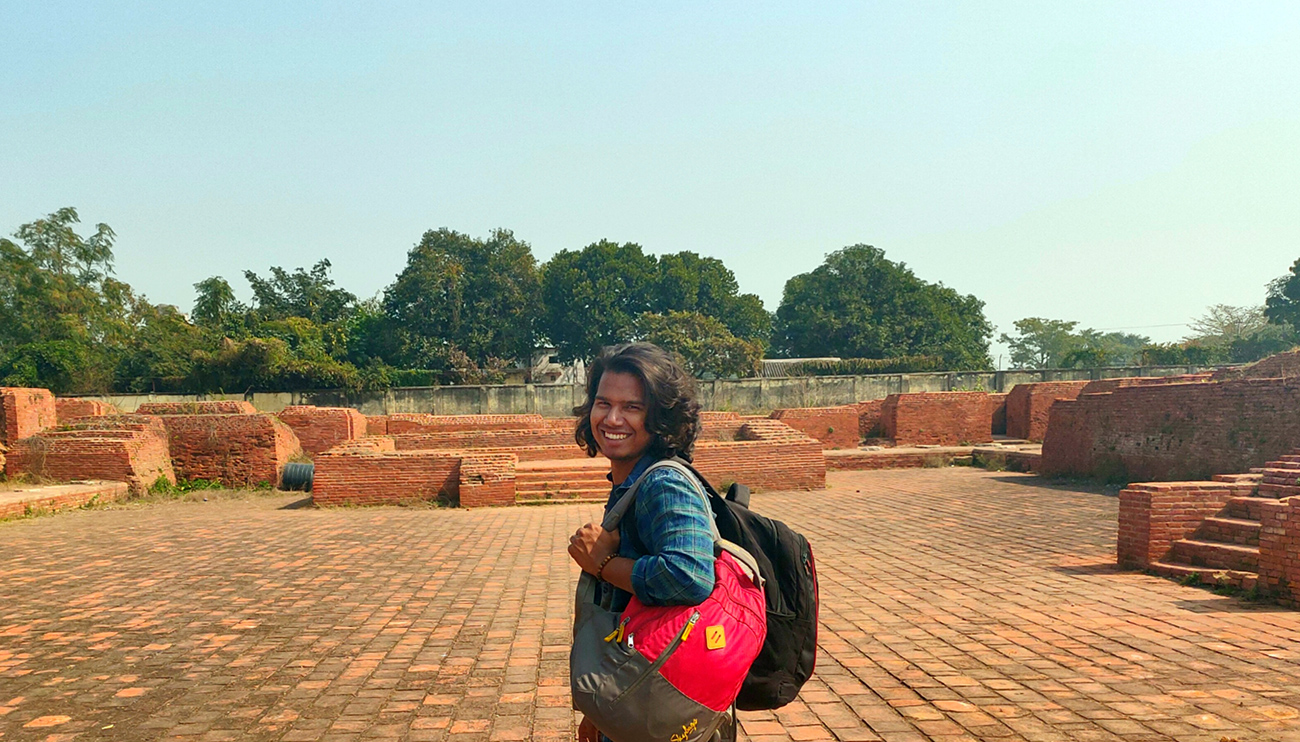 Nalanda is a mystery and a great symbol in itself. It is a place that witnessed profound knowledge, discipline, and glory and at the same time faced bloodshed, fire, and destruction. All these emotions are present in Nalanda’s air. Pay a visit to this UNESCO World Heritage Site and experience the splendour of its complex, beautiful past.

And yes! There is a Nalanda University that is packed with students, faculty, and academic facilities. It is located near Nalanda in Rajgir, Bihar. Established in 2014, it has been designated as an “International Institution of National Importance” by the Parliament and commenced classes from September 1, 2014. It was constructed recently and is quite different from the ancient Nalanda University. So, my innocent friend was not that wrong, I guess?