Gone will be the days where parents of young girls, who are ready to get them married off, create a profile highlighting the best qualities of their daughters on all leading matrimonial websites in India. 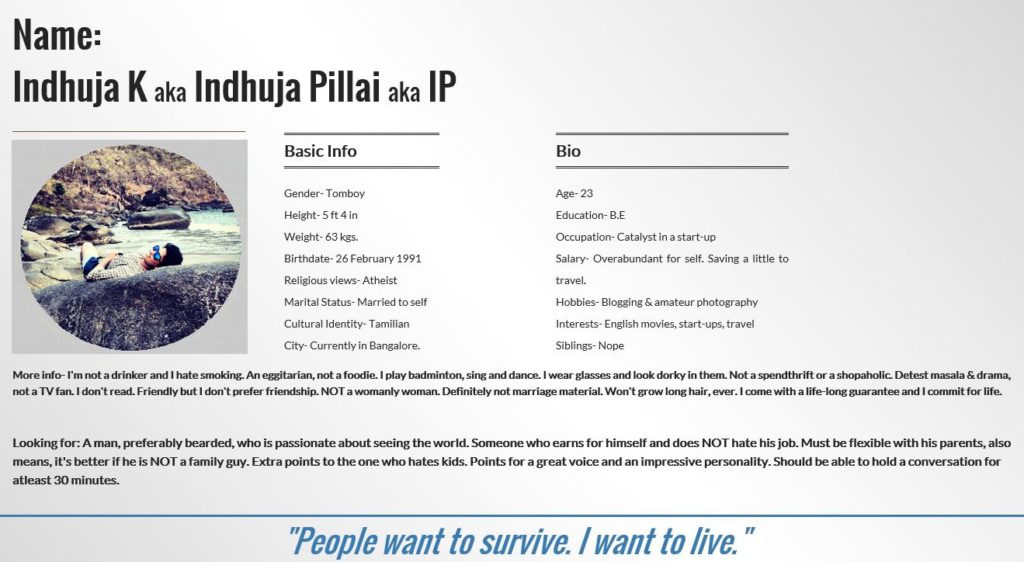 The recent news of a 24 year old engineer, Indhuja Pillai’s sarcastic matrimonial website went viral. She created the website for herself after viewing the profile her parents had created on her behalf on a matrimonial site, which she felt seemed like she’s too ‘desperate’ to get hitched. She was annoyed at the description of hers on the site that as usual stated her name, height, weight, age, profession etc., and thought of this satirical way to take a dig at the society and challenge the existing practice. When I read the news about this, my interest levels broke the scale, because I am soon entering this phase in life and I am pretty sure, my parents would end up doing something just like her parents did.

I opened the website marry.indhuja.com, and my first expression after going through the content of the website was ‘WOW! This is amazing’. She described her gender as ‘Tomboy’, marital status as ‘Married to Self’, salary as ‘Overabundant for self. Saving a little to travel’. I went on to read more and she painted a portrait of herself with small details. “I wear glasses and look dorky in them,” she said. “Not a spendthrift or a shopaholic,” she described. “Not marriage material”. “Won’t grow long hair, ever!”

She described her groom as “A man, preferably bearded, who is passionate about seeing the world. Someone who earns for himself and does NOT hate his job. Must be flexible with his parents, also means, it’s better if he is NOT a family guy. Extra points to the one who hates kids. Points for a great voice and an impressive personality. Should be able to hold a conversation for atleast 30 minutes”.

The page views, likes and shares that this website received surely does give a little ray of hope for the young ambitious and independent women of today, who are not okay with the idea of getting hitched in their early 20s. IP, as she likes being addressed poses a question on who sets the timelines, that a woman will not find a suitable groom once she crosses 30.

Her words, I’m sure act as the voice of millions of women in India, who are wanting to explore the world a little more, do a lot of fun filled and crazy stuffs before they settle down with the responsibilities of a marital life, and above all not just dream of being independent and career oriented, but also achieve that big dream.

I am entering this ‘get married soon’, phase now, and when my parents or relatives advise me to create another ‘desperate’ matrimonial ad, I am going to pose the question, “Why so early? Let me just extend the already set timeline of getting married in the early 20s.”

Kudos IP! You have inspired me and millions of such girls in the country.