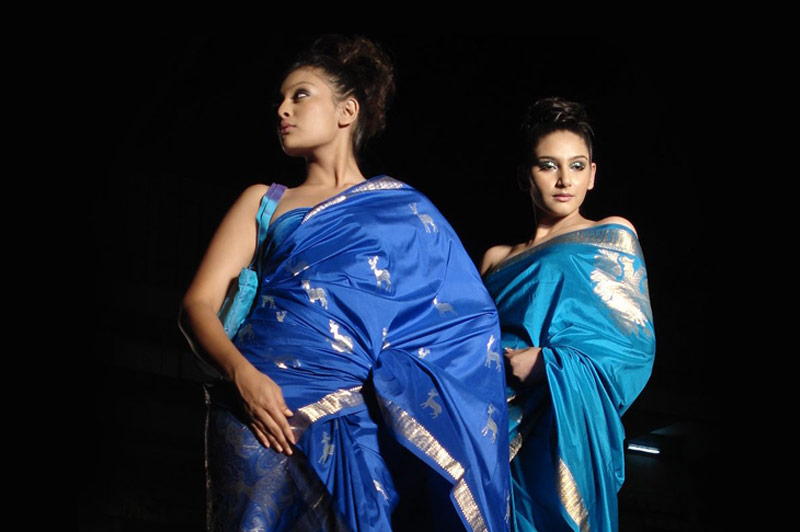 Compared to some other states, the handloom sector in Karnataka would at first seem to be somewhat disorganized by comparison, with little interest taken on the part of the state government in promoting the sector. This is highlighted by the situation in the Priyadarshini showrooms – Priyadarshini is the marketing wing for Karnataka’s handloom apex body – where it’s rather difficult to find the various textiles woven throughout the state. This is in contrast to other states such as Odisha and Kerala, where the focus in government showrooms is on regional varieties. Karnataka has the largest number of GI tags out of any state in India, so this is somewhat baffling. Indeed, the motto for Karnataka Tourism is “One state, many worlds” – which is hardly reflected in Priyadarshini showrooms or most other saree shops, even if that statement is as true of textiles as is of the state’s food culture.

Thus, it’s hardly fair to say that Karnataka is in any way deficient in varieties of handloom, but it is important to note the disinterest among those government bodies which have been successful in other states. The choice of handloom products varies through the region, with both silk and cotton being woven in the drier interior parts of the state, whilst mostly cotton is woven in coastal regions such as Mangalore.

Ilkal is a town in Bagalkot district in North Karnataka, famous for its unique style of saree – which is popular in Maharashtra as well as North Karnataka, to the point that it has been adopted as the typical Maharashtrian saree. The design of Ilkal sarees is fairly basic – a colored body (which may be plain or with checks) with contrasting borders and pallu, usually in darker colors. Common colors for the borders and pallu are red/maroon, dark blue, and green. Body colors consist of green, red, black, blue, and sometimes yellow. The pallu consists of two or three off-white stripes, several inches in width, alternated with whatever colors that the borders are in.

Kasuti embroidery dates back to the Chalukya period and was popularized throughout Karnataka. Kasuti is a sort of hand embroidery done with cotton threads on Ilkal and Kanchipuram sarees, which draws inspiration from traditional rangoli patterns found in Karnataka. The technique itself is of such a nature that the designs will appear more or less the same regardless of which side they’re being viewed from, with no loose ends. These designs can appear throughout the body as well as the pallu, and can sometimes also be found on the borders of the saree. Typically, silk sarees are the traditional base, though some examples can be found on cotton, and lately there has been some deviation from the usage of only Kanchipuram silk and Ilkal sarees, though by far these are still the most common. Kasuti embroidery has been granted the GI tag, but unlike most cases, this does not appear to be specifically tied to a particular place in Karnataka, with the tag being under the authority of the state government to use at its discretion.

In all actuality, Mangalore handloom sarees are hardly distinct from those woven in nearby Kasaragod in Kerala. In terms of colors and designs, this too remains essentially identical to what is found in Kerala. The biggest difference is in the fact that while handloom in Kasaragod has received government attention and promotion to uplift weavers, this has not been the case in Mangalore to a large extent – Kasaragod sarees have a GI tag as well as being sold under the Government of India’s Handloom Mark tag, whilst Mangalore sarees lack the former and there has been less usage of the latter. This is highlighted by the fact that Mangalore cotton sarees sell for as little as one-third of the price that Kasaragod sarees do in their respective government outlets. Typically, Mangalore sarees have small borders with extra-warp designs (around two inches in width), with the border matching the pallu (itself being maybe one foot in length).

Mysore silk is known for its unique texture more than any unique designs. Mysore silk is rather light and easy to drape, essentially being similar to chiffon fabrics in nature. Indeed, with Karnataka being among the leading states for sericulture in India (along with Assam and Tamil Nadu), it is hardly surprising that it is home to a significant silk weaving industry, even if that is less widespread than cotton weaving in the state in terms of unique traditions. Sericulture in the state dates back to the time of Tipu Sultan, who had introduced sericulture in what is now South Karnataka and northwestern Tamil Nadu – with these regions accounting for the vast majority of mulberry silk production in India. Indeed, Karnataka itself produces over 60% of mulberry silk in the country, with Tamil Nadu accounting for much of the rest. Mysore silk sarees are relatively simple in design, typically featuring zari borders and stripes in the pallu, with the typical examples having the borders and pallu dyed in contrasting colors to the body. Unlike Mangalore and Ilkal sarees, however, Mysore silk sarees do not have the borders woven separately, but rather are dyed in such a way that the borders and pallu contrast with the body. However, there are also some examples in solid colors. It is important to note, however, that Mysore silk sarees are not exclusively woven on handlooms, with even those examples sold by the famed KSIC often being woven on power looms.

In addition to these places, there are several places with handloom traditions in Karnataka, including Bangalore itself. Bangalore has rather significant silk and cotton handloom industry, though the designs are not vastly different from what one sees coming from other similar places in South India, particularly Kanchipuram. Silks are typically moderately heavy, and there is a prominent use of jacquard motifs in sarees – and it appears that there is little emphasis on more traditional designs in Bangalore. Otherwise, handloom weaving can be found throughout Karnataka – there are several villages throughout South Karnataka with cotton-weaving traditions, and occasionally one finds references in literature to Davanagere dhotis (Davanagere had at one time been known for weaving, though that’s hardly the case now). Molakalmuru in northeast Karnataka is also known for silk sarees, even having GI status for them. Again, like Bangalore, it appears that there’s no sort of unique traditional design that’s popular, but rather an aesthetic sort of universal in many ways to South Indian silks – temple borders, dobby motifs, and designs such as peacocks and mangoes.