Krishna For Today – An Interaction With Brush And Spirituality 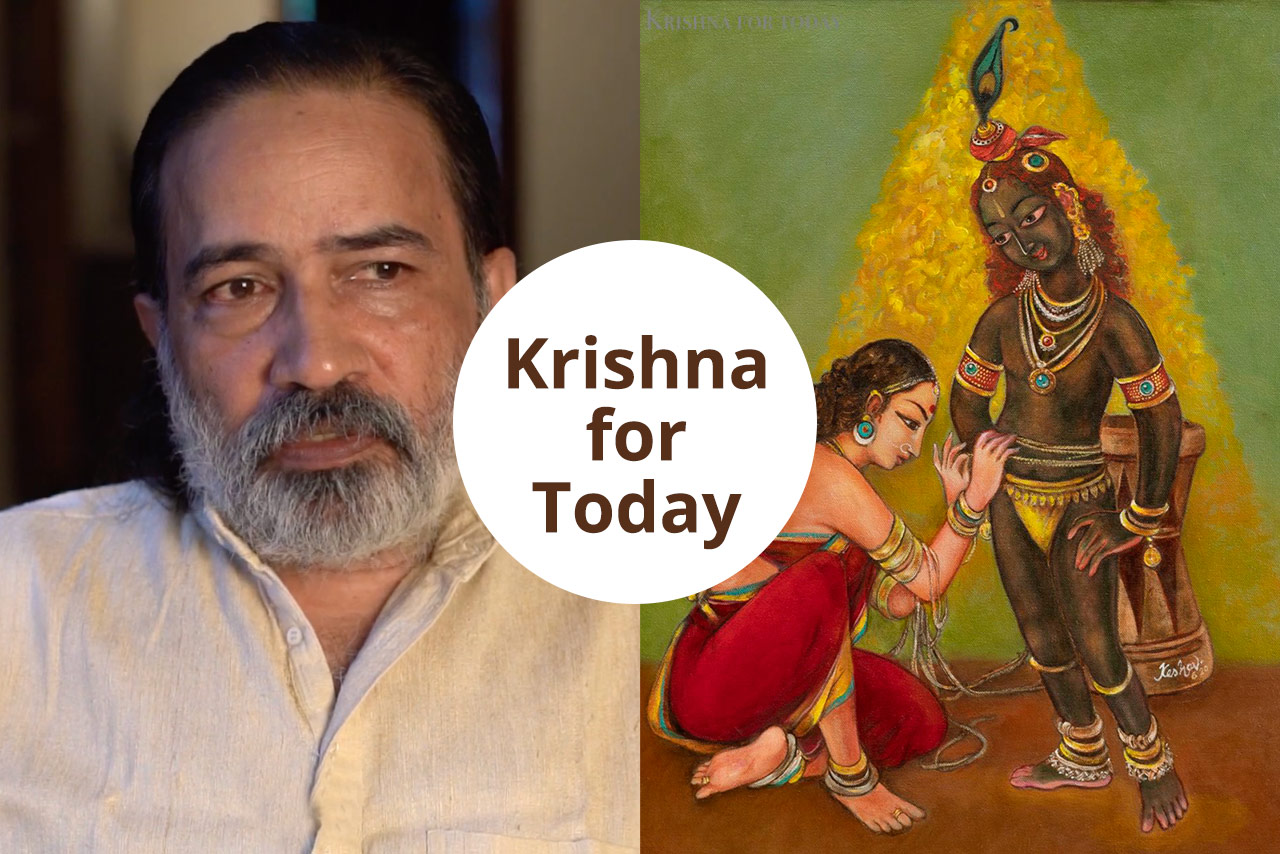 Krishna, with His infinite leelas and names, resonates with everyone in a way only known to them. One can imagine Krishna in their own way – just like His namesakes, he is ideal and different to each one. Chennai-based artist Keshav Venkataraghavan, the founder of Krishna For Today (KFT), affirms the aforementioned statement.

Art is central to Keshav Venkataraghavan; it has always been paramount to his life. In fact, he started drawing even before he learnt the alphabet. Keshav was a cartoonist at the Hindu newspaper for over 3 decades since 1987. Despite no particular formal training, he continued his independent learning while juggling his job. He drew from infancy; he learnt from several sources including books, novels, magazines and even Google now! That is how he describes his journey from library to the internet. 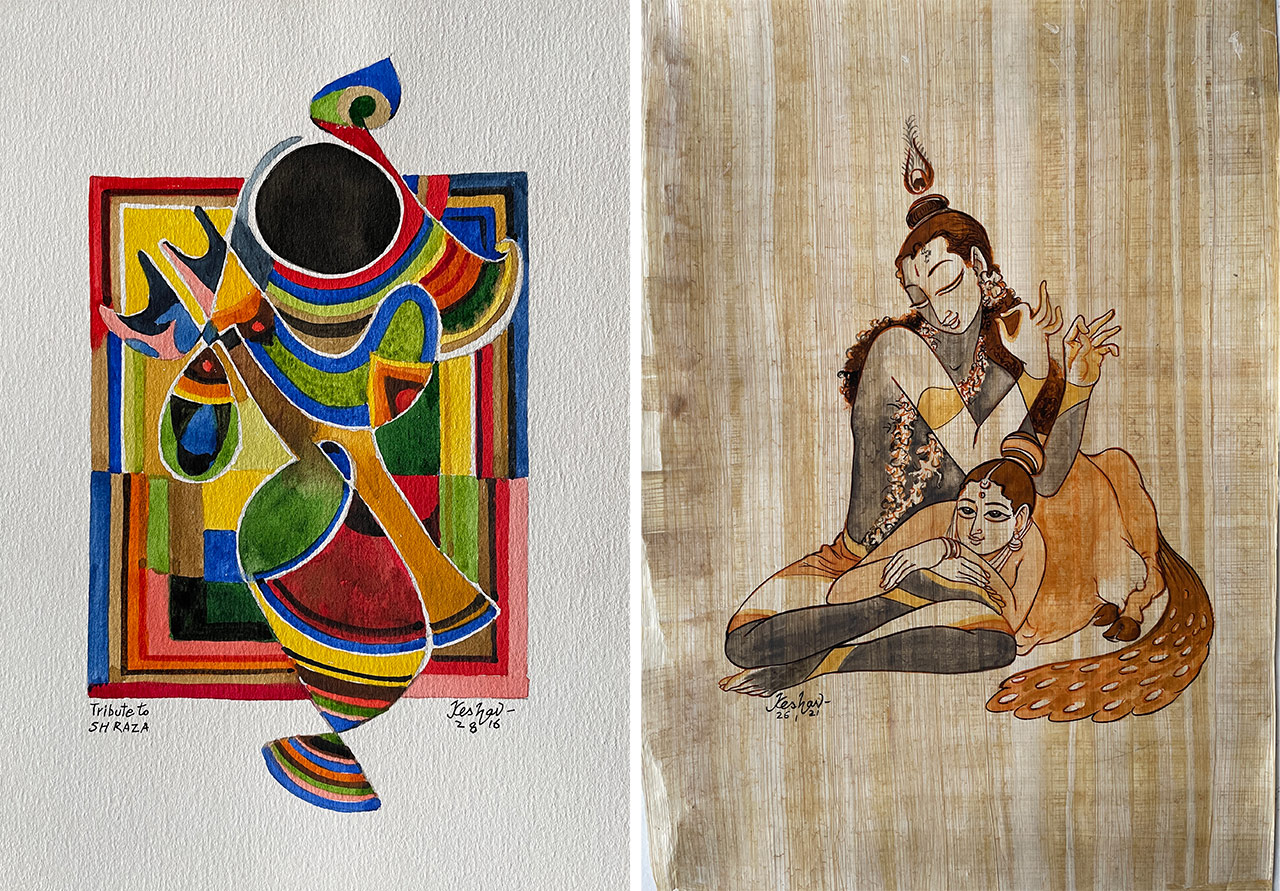 Keshav’s conversations are articulate and eloquent, pretty similar to the tints of color pouring on his canvas. The fervour with which he speaks is like poetry to ears. When asked about why he chose Krishna as a subject, he recalls the words of his father’s Guru, “Draw Krishna.” – this became a complete mantra by itself and instrumental in the journey of Krishna For Today. It was his homecoming and simultaneous universal finding. In 2002, he finally decided to arrive at his home.

He is an ardent learner, a lover of tradition and an observer of modernity. His study surpasses the religion, the dogmatic aspects and the geographical arena. 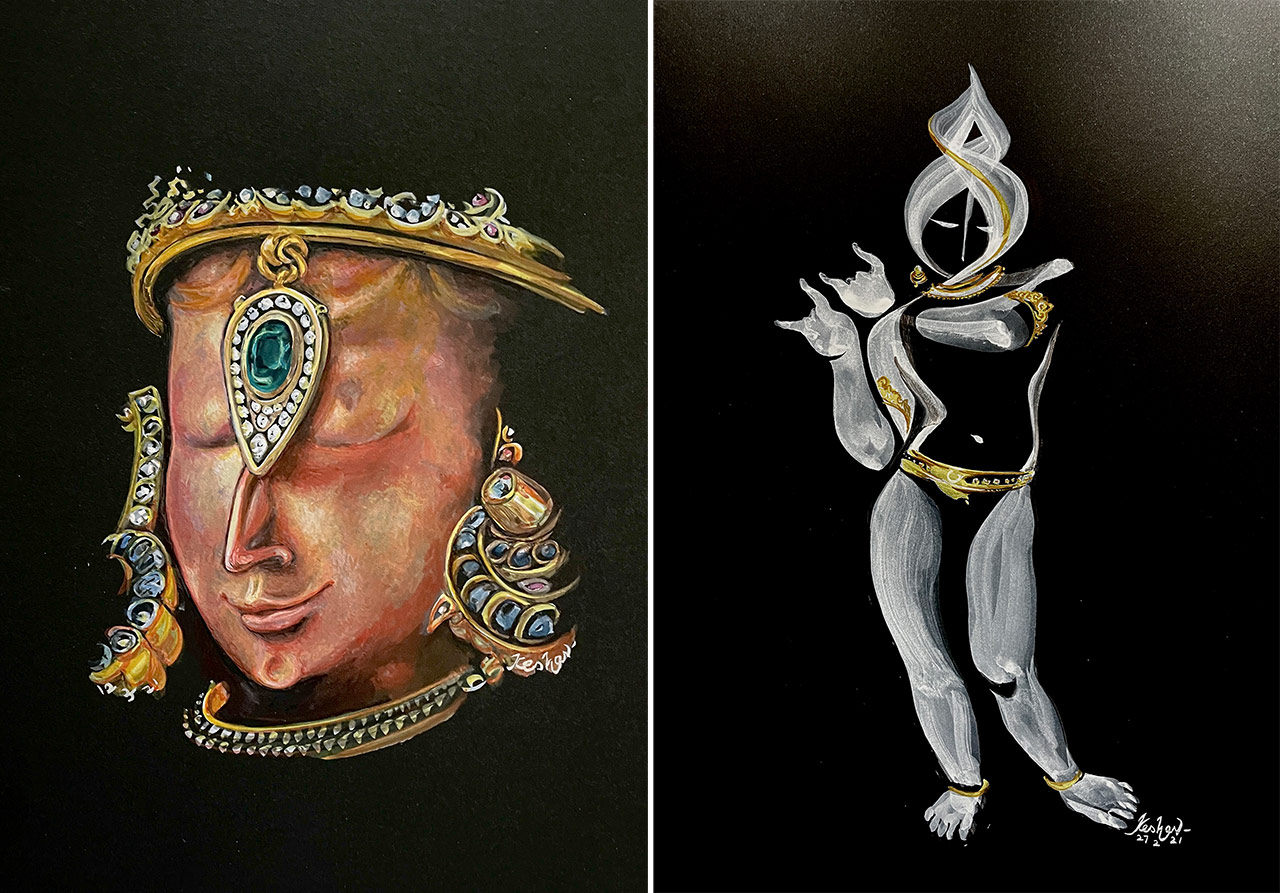 “Which artist(s) inspires you?”

“Every artist, all artists – they radiate a different energy and there is plenty to learn from everyone.”

He studies, learns and reproduces from a variety of sources, such as the Vishnudharmottara Purana, the epics of Kalidasa, Valmiki, Vyasa, and from Itihas. In India, the Bengal School of Art, the Baroda School, Kangra School, Tanjore Art, Nathdwara School of Painting, Pattachitra Painting and artists such as Ganesh Pyne and Rabindranath Tagore have been sourcing his artistic research. These schools and artists sketch a stylised version of epics that went through a mass of work. Besides the Oriental school, he has been examining the Occidental School, ranging from the Italian Renaissance (with a special emphasis on Raffaello), Impressionists like Pablo Picasso, Leonardo da Vinci, Michelangelo, as well as Egyptian art. 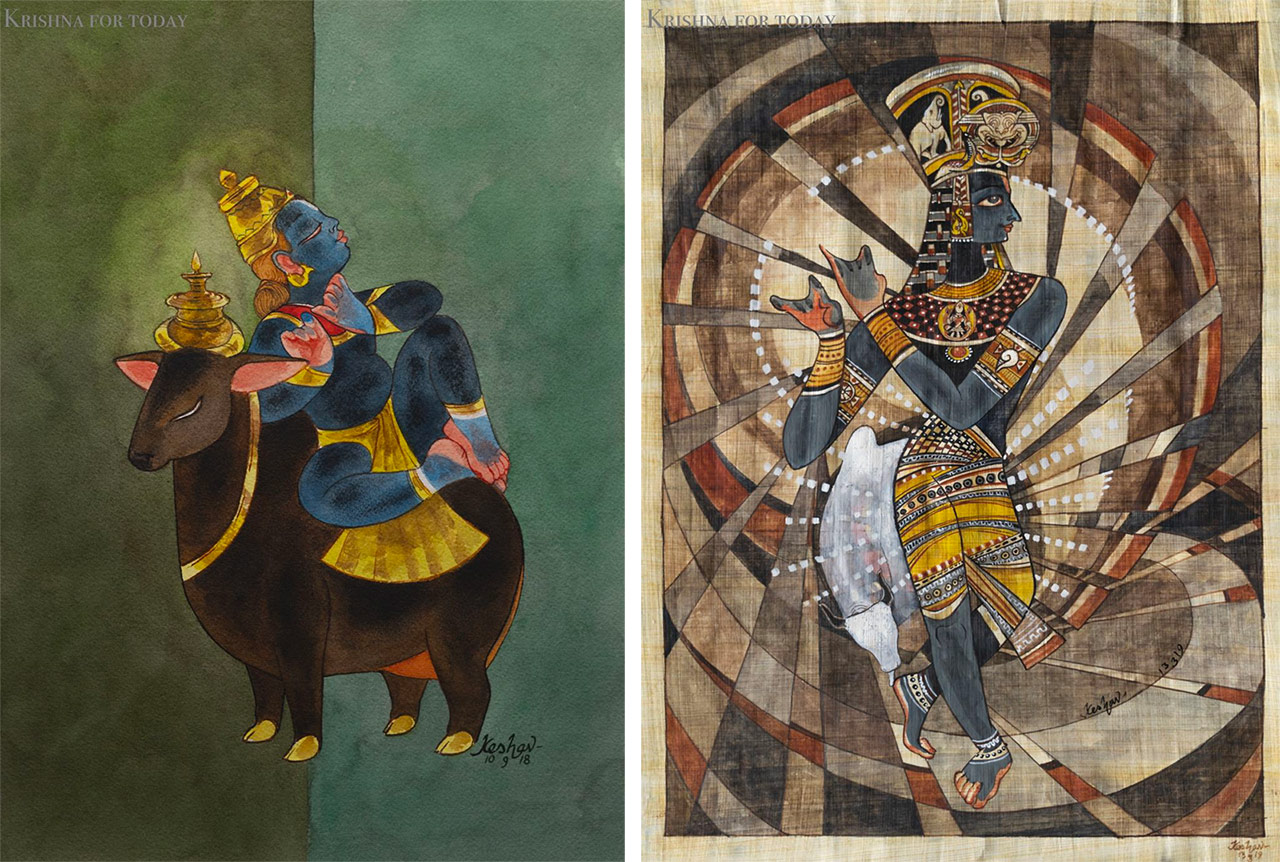 He stresses on the difference between the idealism of the Eastern school and the academic realism of the Western school. Concurrently, he tries to lay more emphasis on the Eastern school where he finds ample scope for refinement and experimentation, within the aesthetically pleasing and lyrical paintings of theirs. His arrival at Indian art is, thus, symbolic.

His style of painting 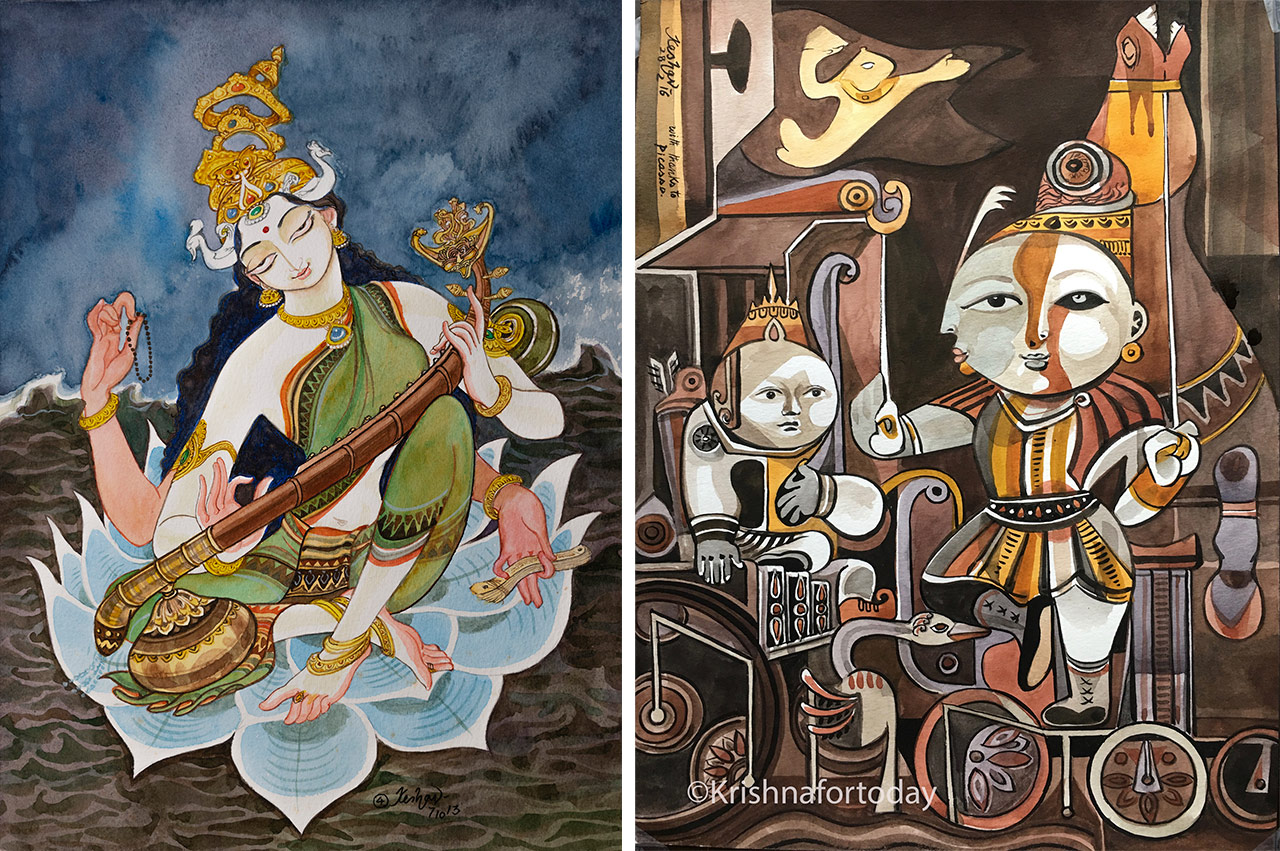 When questioned about how he would define his art and paintings, he chose not to answer. For him, when art gets stuck into a particular rut, it does not grow. So, once there is familiarity with a particular style, it is better to get out of it and look for fresher ideas. To be able to paint Krishna, change, evolution and adaptation must co-exist as Krishna is born everyday in a new and different light.

KFT, through the brush of Keshav, symbolises a continuation of the same Krishna which existed 5000 years ago. The process of involving the new generation is neither a conscious nor a deliberate one but ever existing. 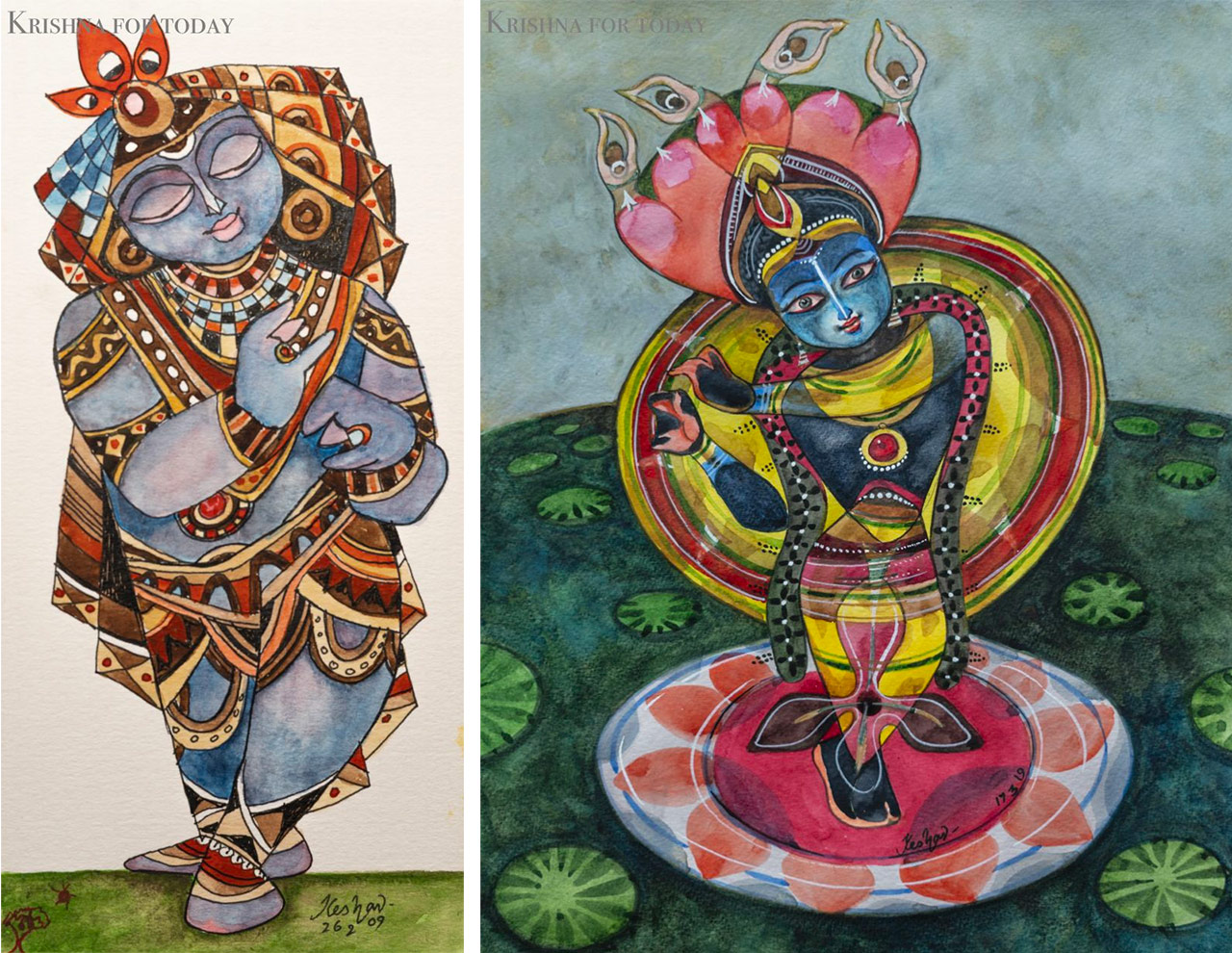 “How can one craft Him new despite his ever existing avatars, his hundred temples and over a thousand scriptures? He, who is Divine, has a modern form, without ever compromising on His conventional elements. There is a laxman rekha even in art which should be adhered to. While the younger generation has a compassion for western art, I have the heartiest desires to decipher a Krishna that they can resonate with.”

Teachings of the Grand Mâitre

Many passionate artists often take a tour to his home, encompassing long journeys just to get a glimpse of the Krishna of today. However, Keshav does not provide formal teaching. What he can do is welcome you with your individual artistic capabilities and allow you all the time for experimentation. ‘No size fits all’ is his motto. 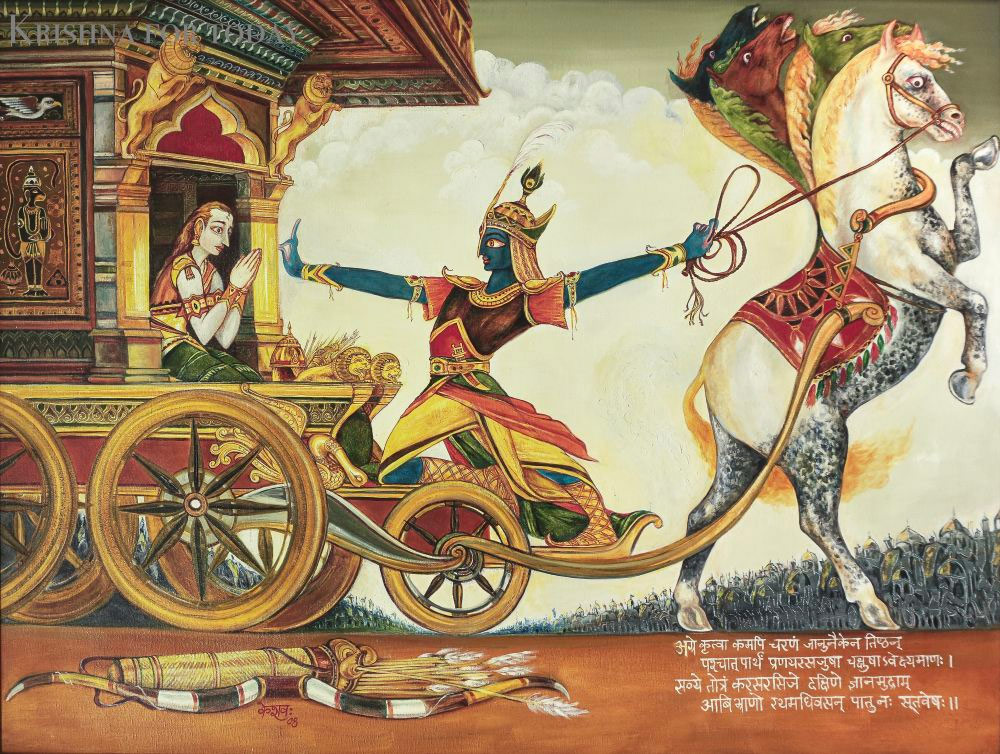 His art master B A Reddy never touched an art board – he respected varied interests, strengths as well as weaknesses. He even adopted a village nearby and named it ‘Sanskruthi’ where he taught students. Most of his students are settled across the world practicing. Hence Keshav permits them to draw how they wish to, by valuing character and in the process, develop their own artistic taste.

Krishna as a part of his individual growth

When you study Krishna’s leelas in the Bhagavata and in the Vedas, you come across underlying symbolism. They convey an idea(s) that is not literal but metaphorical. After several reads and after every read, you decipher a new meaning, completely independent of the previous one. The immeasurable depth is what takes you back and forth, time after time. 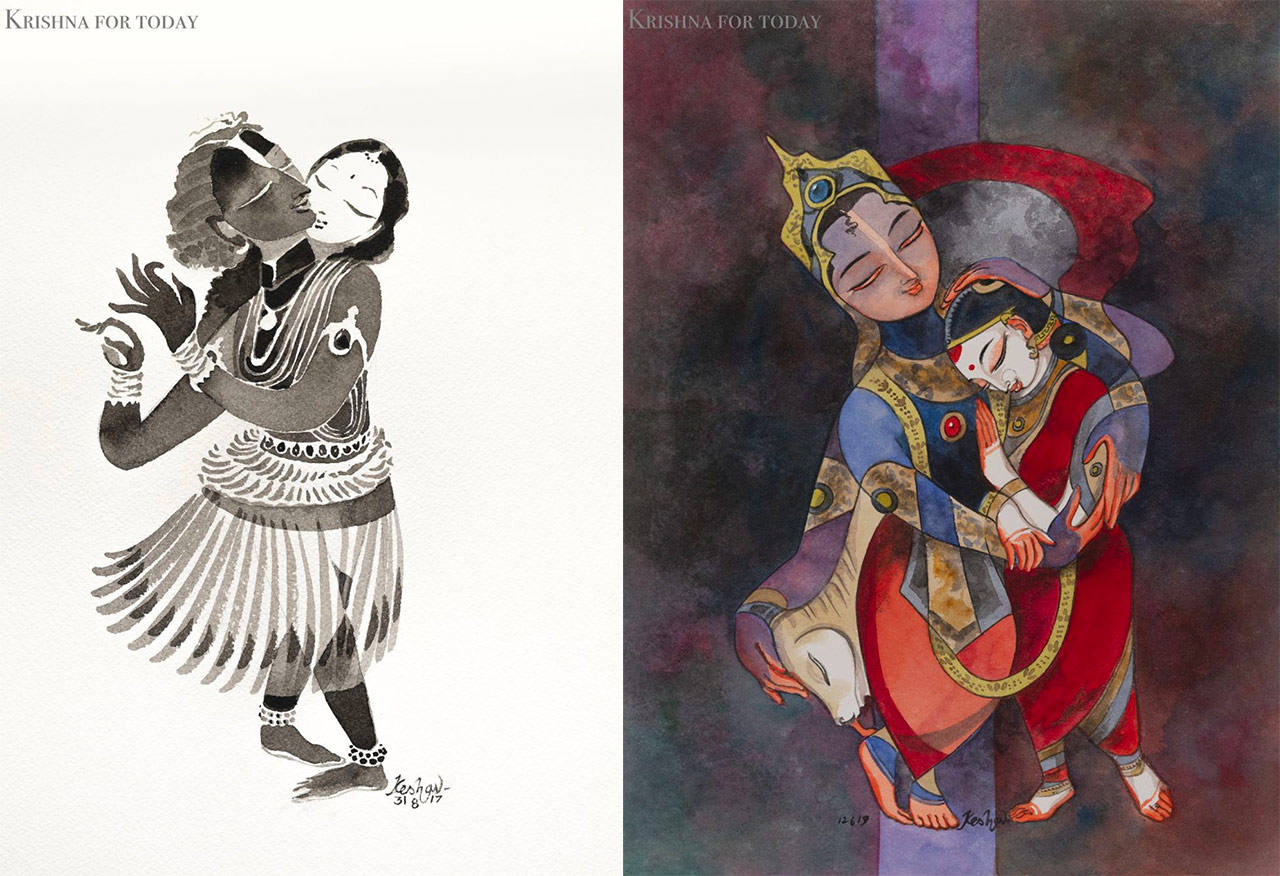 New ideas are born, new connections are made with the Divine and with yourself. The infinite is discovered – the more you learn, it develops and shapes you. Quoting from the Vedas “Ananda ithi brahm”, he says Ananda (Krishna) is the truth and the source of infinite happiness without any scriptural sanctions.

KFT prints are now available pan India as well as internationally. It is profuse how non-Indians are equally admirable of Krishna’s existence and travel across several seas to see his work. An instance is of a Polish couple who came to take a glimpse of his paintings because for them, it was an interaction with Krishna in its most pure forms. Please visit krishnafortoday.com to get your favourite Krishna artwork.