Recently I read news about ‘Udayaravi’ – the house of legendary Kannada poet Rashtrakavi Kuvempu in Mysore would be soon converted into a museum. While this comes as rejoicing news for fans like us, it brought back fond memories of my visits to Kuppali, that enchanting house nestled in the greenery of Malenadu hills. For those who came in late, Kuvempu is the pen-name of Kuppali Venkatappa Puttappa and Kuppali is where he was born on 29 December 1904.

Way back in 1990s, we were a bunch of college students from Shimoga Quiz & Adventure Club, who used to regularly visit the hills of Malenadu near Kuppalli for trekking and nature study. Reading the books of Kuvempu “Malegalalli Madumagalu” and “Kaanuru Heggadati”, we were fascinated to actually see the old house and village that formed the backdrop of these novels.

Kuppali is a tiny village nestled amidst the Malenadu range of hills in the Western Ghats on the border of Shimoga and Chickmagalur districts in Karnataka. In his autobiography, “Nenapina Doniyali”, the poet Kuvempu describes how the Kavimane house (village) got the name Kuppali: “As one had to hop his way to reach the house, the village got the name ‘Kuppali’. In Kannada, the word ‘KuppaLisu’ means ‘hop’. The house is a large three-storeyed mansion with huge front door, a spacious courtyard, and massive compound wall. The grandeur of the house is befitting a zamindar who presided over a vast agricultural property.

Dense evergreen forests crown the hills around the Kuppali house. A few yards away from the house, a path leads us into the forest through a small hill. Located on top of this small hill is a rock monument made of megalithic rocks named Kavishaila, which is dedicated to Kuvempu. The place has a majestic view of the surrounding valley and rocks are arranged in a circular fashion to resemble the Stonehenge in England. At the centre of this rock monument, Kuvempu was laid to rest after his death and a memorial has been constructed at that location.

Today, the house has been converted into a museum by the poet’s trust, Rashtrakavi Kuvempu Pratishthana. The Kuvempu Memorial Trust has also built Ranga Mandira, a large multipurpose auditorium and amphitheatre that is regularly used for various literary workshops and cultural events. Participating in an event in such a verdant surroundings is truly appealing for non-literary buffs as well! The screenshot of Google Maps vividly depicts the lush greenery that envelopes the poet’s memorial. 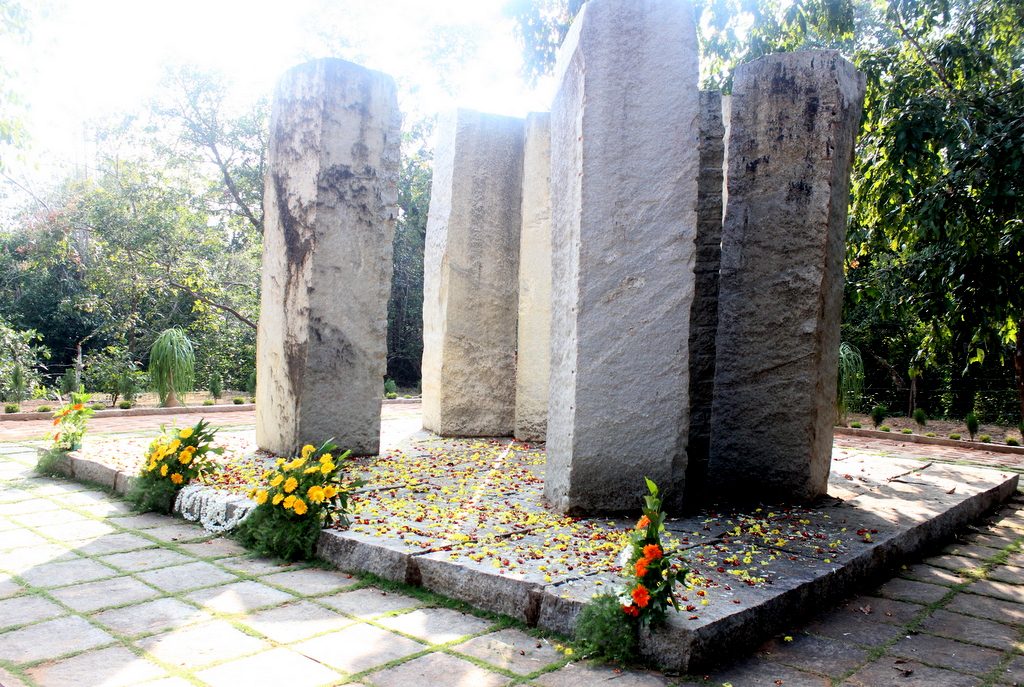 Just besides the Ranga Mandira lies the memorial for Kuvempu’s equally renowned novelist son, Poornachandra Tejaswi or Poochanthe. Interestingly, Poochanthe’s memorial is built in a similar manner mimicking the Stonehenge design of Kavishaila.

I personally believe the literary works of the father-son duo of Kuvempu and Poochanthe have broadened the horizon of every Indian. Particularly, Kuvempu’s message of Vishwamaanava Sandesha clearly states “O nanna chetana, Agu nee aniketana” (“Be unhoused O my soul, only the infinite is your goal”). Every child, at birth is the universal human. But, as it grows, our society turns it into “a petty human”. It should be the function of our education to turn it again into the original “universal human”. 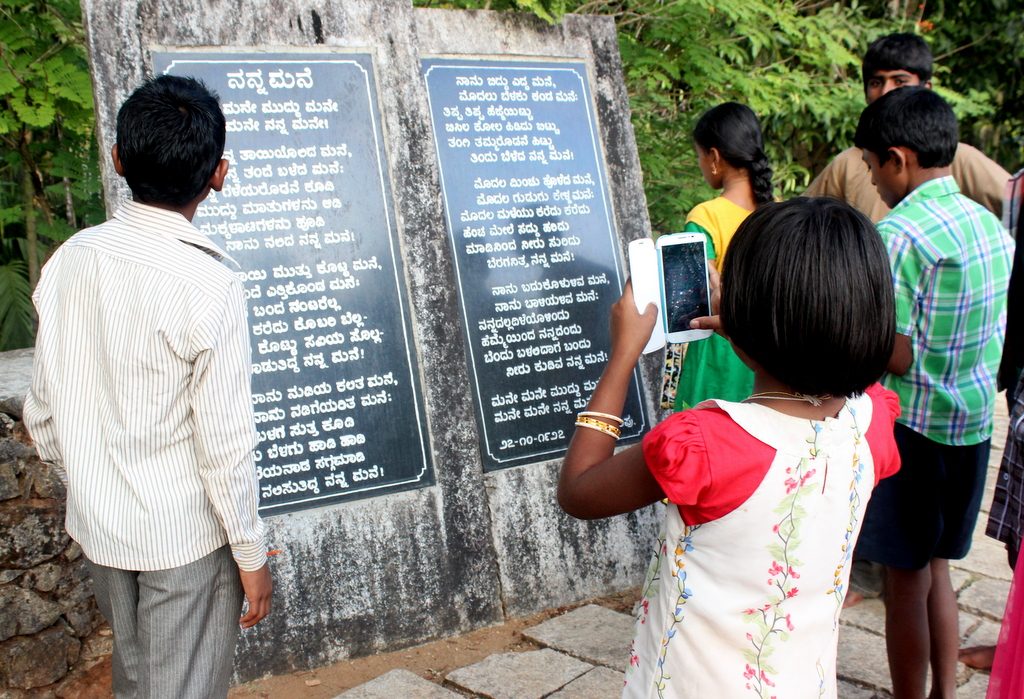 This year, The Rashtrakavi Kuvempu Prathishtana is organising a workshop involving study of Kuvempu’s works to commemorate the 50th year of Kannada’s first Jnanpith award and also mark the 114th birth anniversary of the poet on 29 and 30 December 2017.