Memories of Poochanthe – A walk Down Nature’s Path

Andaman Islands, source of the Nile River, Flying lizard, Post office in Abachur, Maneater of Rudraprayag, Flying saucers… Do these disparate terms mean anything to you? Do they remind you of something or someone? If not, don’t strain yourself; these are the key themes of various novels of renowned Kannada writer, K.P. Poornachandra Tejaswi. Affectionately called by his pen name, ‘Poochanthe’ was the first writer to have introduced nature themes and scientific topics into his various novels.

All of us are generally inquisitive about nature and the mystery hidden in it, which becomes apparent only for those who would like to unravel it. However, if we get to know the legends behind such mysteries of nature, we will be all the more curious. Did you know that there is a mysterious flying lizard named ‘Draco dussumieri’ that inhabits the deep jungles of Western Ghats? 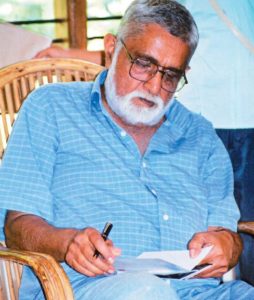 That intriguing story unravels in Poochanthe’s most famous novel ‘Karvalho’. The protoganist, Karvalho, is a zoologist studying these flying lizards in the Malnad region, who is well supported by interesting characters such as Mandhanna, Yengta, Prabhakara, Kariappa, etc. Throughout the novel, the scientist is on the hunt to find the elusive flying lizard, which finally appears at the end of the novel. However, just when the scientist and his team are about to capture it, it flies down a cliff and vanishes into the vast jungle.

During my childhood, my literary friend Kaleemullah K M and I were part of an adventure activist group. In fact it was Kaleemullah who inspired me to understand nature in an in-depth manner. Once, we had camped in the tropical forest outside Koppa in Chickmagalur district to protest against deforestation. During a forest trek, someone in our group screamed out that they found a flying lizard. We were all thrilled to see such a rare species that had become famous due to Poochanthe’s Karvalho. However, later we were shocked when villagers told this was a common species found across the Malnad region!

Tejaswi, in Karvalho, talks about purchasing honey from Mudigere Jenu Society and later finds that the honey has solidified. Feeling cheated, he complains to the society about the bad quality of the honey the next day. However, Mandhanna, a worker at the society explains to him that good quality honey always solidifies in cold climate and asks him to taste the honey. After tasting, Tejaswi realises the honey was actually good since it had a strong flavour of coffee, which was due to its extraction during the coffee blooming season.

After reading many of his novels, we could assume Poochanthe to be a staunch environmentalist. In fact, we Kannadigas can claim that Poochanthe is perhaps the first Indian author to have focused mainly on environmental themes. However, he wasn’t the typical flag bearing activist who went about protesting developmental activities. Just that his yearning for natural surroundings took him away from the cities back to the remote villages. In his own words, “There is no direct linkage between environmentalism and the numerous small incidents that I have narrated. However, I can say it is visible in the path I have walked down over the years”. 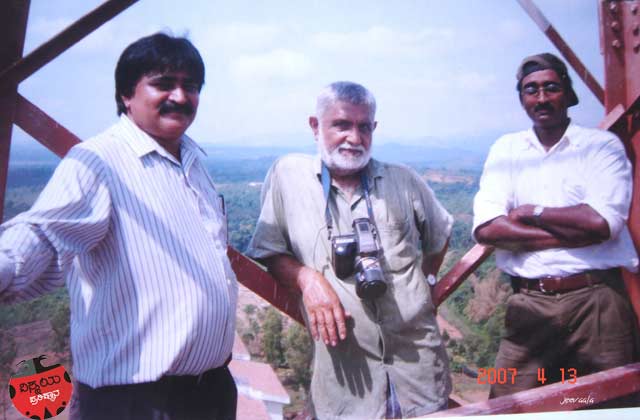 In fact, in his short story collection, ‘Parisaradha Kathe’, there is an episode about a wild boar hunting activity done by his friends in the forests near Mudigere. In another episode named ‘Kukkuta Pishacha’, Tejaswi narrates a simple story which teaches a great lesson that nature has its own equation and tactics to survive in this wild world. A forest hen regularly appears in front the passersby and provoke them to catch it. The idea is to take them to far away from its nest where it is hatching its eggs.

Jugaari Cross is another novel where Tejaswi talks about underworld smuggling activities in the serene forests of the Western Ghats. By narrating the conflict between smugglers and villagers, he tries to convey the message about the issue of environmental harm and deforestation. In fact, the Jugaari Cross novel can be considered one of the best suspense thrillers in Kannada!

While Poochanthe may claim that he wasn’t an environmentalist, his love for birds and nature at large was evident to all. Particularly, he took up photography due to his extreme passion for ornithology. Numerous descriptions about birds and their activities are scattered across many of his novels and short stories. I vividly remember two such descriptions:

Poochanthe used to regularly take his daughter to the nearby forest to see nature in close quarters. In one such occasion, they both found an abandoned nest of weaver bird. His daughter insisted on bringing it home and feeding the chicks. They did bring the chick home and nurture, but their adventure ended soon when the chick couldn’t digest any of the food given by them. Typically, an adult bird chews the food and regurgitates it for its chick, a process which Poochanthe couldn’t replicate. After the chick died, his daughter was inconsolable for days!

In another incident, a Sandpiper used to visit the riverbank where Poochanthe and his friends were fishing. Once they offered a very tiny fish to the Sandpiper. Astonishingly, after a few minutes of dilemma, overcoming its immense fear imbibed by the evolutionary intuition of not accepting offered food, the bird accepted the fish and ate it. Over a period, it became an avid follower. It was so habituated that even an act of throwing used to attract the sandpiper.

At this stage, Poochanthe and his friends get a feeling that their friendship might pose a danger to the bird, if it approaches a stranger. They try to keep a distance but it was too late. Tragically, one day, the Sandpiper swallows a bite along with the fishing hook, assuming it as food offered to it and dies instantly in front of their eyes. A point was proven again that human friendship would always spell a doom to wild creatures.

Today on his birthday, we remember our endearing Poornachandra Tejaswi, whose books, drawings and photographs brought us closer to nature much more than any Discovery or Natgeo TV channel did!