Megh Malhar: The Passion-Quenching Raaga in Body of Music

“My Beloved has come home with the rains
And the fire of longing is doused
Now is the time for singing, the time of union
At the first thunderclap
Even the peacocks open their tails with pleasure and dance..”
~ The Long Drought is Over , Mirabai

Swinging between the spectrums of consortium with Radha on one side and the maddening trance of Mira on the other, the pendulum of rain has stricken the grounds of Ras Leela compositions for generations. Raaga megh malhar happened to music, like the first steps of an infant on her feet- anticipated but its occurrence unknowable, awaiting the ‘It!’ moment. Legend has it that Mian Tansen, the godfather of Indian classical music who presumably summoned fire through the raaga deepak conceived of raaga megh malhar and handed it down to his daughter. Having previously sparked the rumor that he was capable of bringing light to an oil lamp through his music, Tansen was called upon Akbar’s court by the latter’s subjects to demonstrate this power. On the pedestal, Tansen gave birth to raaga deepak. Knowing well that the spell of heat would leave him weak and probably beget death, he conferred upon his daughter the raaga megh malhar. Fatehpur Sikri witnessed raaga deepak, the genius of Tansen followed by the cloud-invoking raaga megh malhar. The word goes that this musical evening began the lifelong comradeship between Tansen and Akbar. 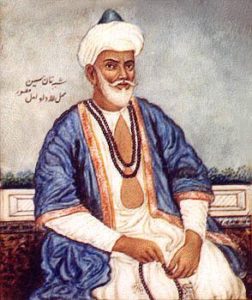 Symbolized as the quenching brew for passions, megh malhar is claimed to have the power to bring rain over a land, especially after deepak had invoked heat of summer. Deepak brought up the flames and megh malhar brought down the rains. Smoke arose from their union as cold water meets the warm skin, turning the body heat into vapours. Figuratively, it is the fervent chanting of expectation for a ‘yes’ following the adrenaline-filled movement of passion in a relationship. At another level, it represents the cyclical nature of being itself- the coming and going of seasons reflecting the constantly moving face of life. Yet another interpretation says that it marks the end of suffering- the bliss of sensitivity to all forms of life (salvation, moksha, satchitananda). The wetness of rain becomes skin to all that exists. It unites us in the folds of water, the life-giving potion (a reference also to the amniotic fluid surrounding fetus in the womb).
V.N.Bhatkande, an expert on music reveals that although megh malhar isn’t a tough raaga to master, it has only been tamed by a few Ustads. In his text ‘Moods of Malhar’ , S.D. Sharma trails with classical music artistes over the spirit of raaga megh malhar. Shovana Narayan, an outstanding Kathak dancer shares that megh malhar is the most frequently used raga in Kathak, in virtue of its ability to convey an array of emotions. She also plans to innovate its inclusion in other forms of arts like dance dramas. The maestro from oldest of Gwalior classical Hindustani music gharana, Pt L.K. Pandit holds megh malhar to be the sound of desire and bliss. His daughter, Meeta Pandit is also a devoted vocalist with proficiency in khayal and tappa gayaki. She remarks that megh malhar has been the blood of satiation for body of music, as is exuded through compositions like ‘baadal garje bijuri chamke’ and ‘bol re papihra’. Megh malhar is often considered a variation of raaga malhar and used interchangeably with it. Anchoring on the roots of its meaning, Pandit Yashpaul (a globally acclaimed classical music composer) says that ‘mal-har’ stands for the movement of washing away evil or sins from ground of virtue and good and can be transposed under light of different cultures to reach out to the audience.
Sung by geniuses of Ustad Ghulam Ali Khan, Bhimsen Joshi and recently Rashid Khan , megh malhar was embedded in the movie ‘Tansen’ of 1942 as ‘Barsorey’ and sung by Khurshid. This was followed by the rhythm-dripping voices of Asha Bhosle, Shamhad Begum, Mohd. Rafi and Manna Dey singing ‘Dukha bhare din bite re bhaiya’ in ‘Mother India’ of 1957. Two other interesting compositions of megh malhar include ‘ghanana ghanana garjo’ in Baiju Bawra by Amir Khan and ‘Kahan se aaya badra’ in Chasme Baddur by Haimanti Sukla and Yesudas.

Urdu language continues to be an integral part of the Indian culture and linguistics. It is widely spoken in many parts of the country. Some of the states where it is predominantly spoken include Uttar Pradesh, Madhya Pradesh, Andhra Pradesh, Telangana, Karnataka, Maharashtra.
Read more
Nostalgiphilia

Whether as kids or as adults, the baraf golas are one of the most irresistible delicacies that generations can identify and connect memories with.
Read more
Art & Culture

Tamil Nadu Culture: Tamil Nadu is a land of enchanting beauty, a vibrant culture and a grand tradition. Through its fascinating heritage and historical significance, the state has managed to capture the attention of the world.
Read more
Art & Culture

The Kantha Embroidery is one of the most popular craft forms of India. It serves a great utilitarian purpose without losing its beauty and intricacy.
Read more