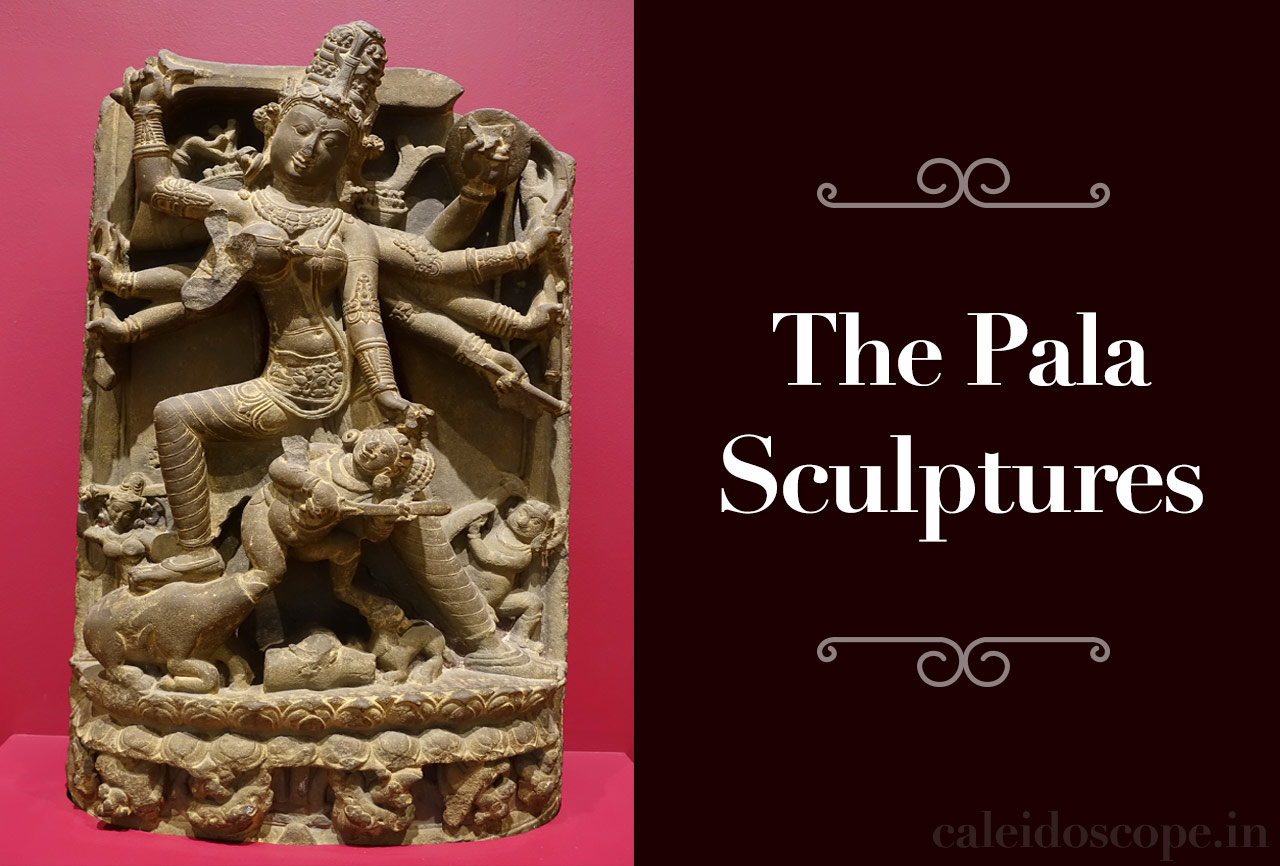 #Didyouknow that an empire in India from over 1000 years ago known for its vast army of war elephants were also patrons to some of the best sculpture that has ever been produced in the Indian subcontinent? We are talking about the Pala Empire (r. 750-1161 CE). They were an imperial power which originated in the region of Bengal named after its ruling dynasty. The empire was founded with Gopala as the emperor of Gauda in 750 CE by the people to end anarchy, he extended his power to Magadha, which was a major Buddhist centre, rulers of North Odisha were his vassals. His lineage of rulers brought about greatness and prosperity. The Palas ruled over western Bengal and eastern Bihar, which included the major cities of Gauda, Vikrampura, Pataliputra, Monghyr, Somapura, Ramvati, Tamralipta and Jaggadala. The map below shows Gopadri, Kataka, Kanyakubja, Mudgagin among others.

As mentioned, their army was noted for its vast war elephant corps. Their navy performed both mercantile and defensive roles in the Bay of Bengal. They built grand temples and monasteries, including the Somapura Mahavihara and Odantapuri. Odantapuri (also called Odantapura or Uddandapura) was a Buddhist Mahavihara in Bihar, India. It is believed to have been established by the Pala ruler Gopala I in the 8th century. Somapura Mahavihara was built by the second Pala king Dharmapala (circa 781–821) of Pala Dynasty. The Palas patronised the great universities of Nalanda and Vikramashila. The empire had diplomatic relations with the Srivijaya Empire, the Tibetan Empire and the Arab Abbasid Caliphate.

Sculpture from the Pala period

The son of Gopala was Dharmapala, his son was Devapala; they were great patrons of art and culture. It is during their regime that the Universities of Nalanda, Vikramshila and Uddandapura flourished and art too got a major fillip. The Buddhist pantheon was richly depicted in sculpture in Bihar and Bengal which had some Gupta period influence and style. The figures of Bihar were heavily set. The depictions included the Buddha, Avalokiteswara  Khasarpana, Goddess Tara, Vagiswara, Prajnaparmita and other deities. The Hindu pantheon’s early depictions show Lord Surya attended by Danda and Pingala, Lord Shiva as Uma-Maheswara, Lord Vishnu with personified weapons. The early phase also had huge carefully sculpted images of Lord Vishnu with consorts and images of the Jain Tirthankaras. The images in Bengal came with a difference; they had a feeling of lightness with delicate treatment.

The regime of the Palas was prosperous as already mentioned. During Mahipala’s rule (970 – 1030 AD) a Buddhist mission was sent to Tibet. The Palas made many lakes and water bodies in Bengal and Bihar. There were splendid mansions of merchants along the waterways of Bengal. The last Pala ruler was Iradyumnapala.

The later phase of Pala art showed its own stylistics going away from the Gupta idiom, evident in the weapons of Lord Vishnu not being personified, upper garment of figures shown as wavy lines, the headdresses became more detailed as well. The Pala sculpture was well ornamented. By the 10th century Tantrism influenced Pala sculpture. In the 11th and 12th centuries both Buddhist goddesses like Tara and Hindu goddesses like Saraswati and Ganga were sculpted. The black stone was highly used for sculptural work. It flowered and flourished for nearly 5 centuries in Bihar and Bengal. Nalanda was a great centre during the 9th and 10th centuries. There were monks who were experts in the arts. The Pala art’s influence can be seen in Nepal which provided a sanctuary after Nalanda was ravaged by invaders. The art also influenced Tibet, Burma, Thailand, Cambodia, Java and Afghanistan as well.

Stone sculpture of Pala times are found at Nalanda, Rajgriha, Bodh Gaya, Kurkihar, Dinajpur, Rajshahi, Bhagalpur and Khiching in Odisha. Let us look at some of their sculptural marvels.

Vishnu with his consorts

A very large stone stele of Hindu god Vishnu with his two consorts is depicted: to his left is Saraswati, the goddess of learning and music; to his right, Lakshmi, the goddess of fortune and wealth. The stele has other gods, demigods, and worshipers as well. Two river goddesses stand at the base of the columns. Beyond them are figures representing the weapons of Vishnu in human form, ie. They are personified; Gadadevi (his mace) and Chakrapurusha (his war discus) in niches. Lord Ganesha occupies the niche at the top left corner; Kartikeya occupies the right corner. The two inner niches depict Lord Shiva on the left and Lord Brahma on the right.

This is a rare depiction of Lord Vishnu on his vehicle, the man-eagle Garuda, here shown with a human head, wings outstretched, and tail feathers expanding like rays of light behind the head of the god. Garuda is the enemy of serpents, and a snake is tied around his neck. Devotees are seen kneeling in front. Lord Vishnu is shown with his emblems. This sculpture shows Gupta period influence (4th – 6th centuries), like fluidity and gentle modelling.

The 11th century image shows a smiling multi-armed Goddess who has vanquished the demon Mahishasura. Her weapons are in her hands and she wears a karandamukuta (headdress). She is  bejewelled, wearing a girdle and her garment has been indicated with wavy lines. The figure has been sculpted in phyllite, shown on an ornate pedestal.

A very beautiful and pristine figure of the Buddha with two devotees sculpted at the sides. Buddha is in the varadamudra, a gesture of giving, standing under a canopy against an ornate backdrop with an inscription behind. His garment is depicted with wavy lines.

Uma-maheshvara is a sculpture which depicts the Hindu god and goddess Shiva and Parvati, together called Uma-Maheshvara. Uma is one of the names for Shiva’s wife Parvati, Shiva as ‘Maheshvara’ means ‘Great Lord’. There is an impressive prabhavali or circle of flames behind them. Their son Lord Ganesha is carved on one side of the pedestal they are seated on. There are other figures as well, maybe devotees and Nandi, the bull, Lord Shiva’s vehicle, also the tiger vehicle of Parvathi or Uma.

Goddess Durga in black stone shows her standing holding her weapons. A devotee is kneeling by her left side with folded hands. On the right is her vahana or vehicle, the lion. A peaceful depiction of the multi-armed goddess with her lower right hand in varadamudra or gesture of giving. She is adorned with heavy jewellery and a girdle, her garment has been depicted with lines.

Lord Vishnu is depicted with his emblems; mace, conch and discus, and his consorts. He is wearing a karandamukuta. His lower right hand is in varadamudra or gesture of giving. He is standing on a lotus pedestal.

Lord Ganesha has been sculpted in grey schist, multi-armed and depicted with his vehicle mooshaka. A semi divine being is on the top right side. Ganesha is holding ‘laddoos’ in his back left hand and his front right hand is in abhayamudra, a gesture of blessing and fearlessness. The sculpture is broken at places, but it is nevertheless striking.

Lord Surya in the stone stele is standing and the pedestal shows his seven horses. Three women devotees are depicted and the other two figures flanking him are Danda and Pingala. The background of the sculpture is richly carved as well.

Lokesvara Khasarpana, a form of Avalokitesvara, is depicted with a half-smile and closed eyes and seated on an ornate floral motif throne. His right hand is in varadamudra, a gesture of giving. In Buddhism, Avalokitesvara is a bodhisattva, an individual on the path to becoming a Buddha, who embodies the compassion of all Buddhas. He has 108 avatars. The deity’s four standard attendants: the goddesses Tara and Bhrikuti to the left and right of the bodhisattva and on the base, Suchimukha, is at the left, and Hayagriva at the right in front are seen.

A very striking figure of the Buddha with Buddhas in different mudras or gestures around the main figure in this stone stele. The Standing Buddha is in the abhayadamudra, a gesture of blessing and allaying of fear, standing against an ornate backdrop and a lotus pedestal. His garment is depicted with wavy lines.

Bodhisattva Maitreya is the ‘Buddha’ of the future who is prophesied to appear on Earth, achieve complete Enlightenment, and teach the Dharma. According to scriptures, Maitreya’s teachings will be similar to those of Gautama Buddha. Maitreya, in Buddhist tradition, presently resides in Tushita heaven. Here we seem him sculpted in gilt bronze, crowned and bejewelled and standing on a lotus pedestal. A leafy stalk of flowers rises from the lotus base along his left arm. A small ewer, probably for holding ‘nectar’, the elixir of life, is seen near the top of the bloom to his left.

The sculptural marvels of the Pala period are in India and some museums overseas. Their splendour will continue to increase as time goes by. The scale of their art covers major religions and their work will always be revered. The Pala dynasty sculptures are iconic and have inspired the art of many other countries, so they will always be seen as pioneers in their style and execution both in stone and metal.