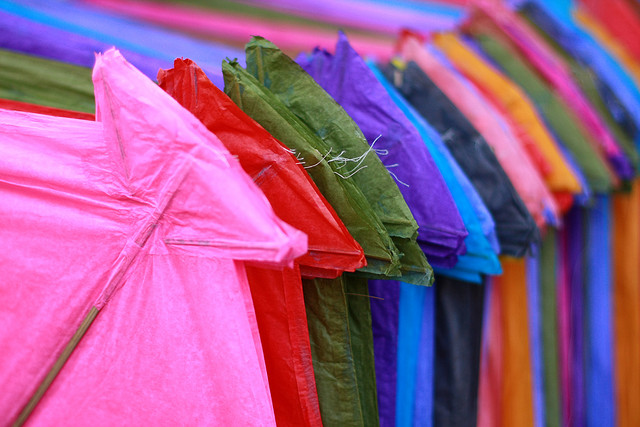 As the winter chill grips the nation, children remain unperturbed by the cold winds. In fact all the free time after the onset of the new year is spent on patang (kite) making. The Makar Sankranti festival in mid January marks the advent of the harvesting season across India. Ripe crop in golden hue is harvested and the fields are empty for children to play.

Children and adults alike throng the open spaces during the Makar Sankranti or Uttarayan festival – the only Hindu festival which is fixed on the modern solar calendar. It is an auspicious day when the sun begins its ascent on the Uttarayan path, which in turn indicates the winter solstice. It is celebrated all over India in different names – Makara Sankramana in Karnataka, Pongal in Tamilnadu, Magh Bihu in Assam, Uttarayan in Gujarat, Khichdi in Bihar and Lohri in Punjab. 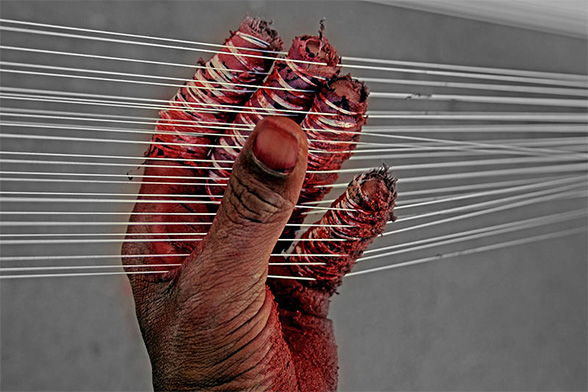 Whatever may be the significance, children only bother about one thing – flying kites!  Patang (kite) flying begins at dawn and continues without a pause throughout the day. Friends, neighbours and total strangers battle one another for supremacy. They not only need to fly their kites, they also need to cut their rival kites down and make a dash for capturing their prize. To enable their kites to cut the strings of other kites, the dreaded Manja needs to be coated generously on the strings. Manja is prepared by mixing ground glass with gum and metal abrasives! The strings are coated with this colourful mixture and strung to poles to dry, before it is rolled onto a wooden roller – Firki. It is a different matter that children should not be dealing with such a toxic mixture! 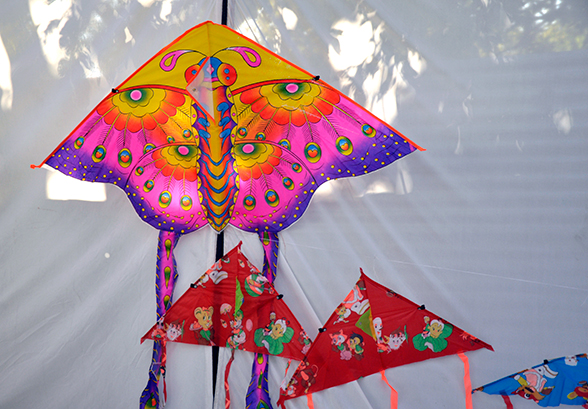 While kite flying celebrated during Makar Sankranti across India, no where it is more serious a business than it is in Gujarat. The business is so serious that the state’s tourism ministry has hosted the International Kite Festival every year in Ahmedabad since the last 25 years! Since this year is its silver jubilee, the International Kite Festival is being celebrated with more grandeur than ever. 100 kite flyers from 40 countries are expected to take part during this eight-day kite flying extravaganza. Apart from the grand finale on January 14th at the Sabarmati Riverfront in Ahmedabad, the festival will travel to other cities such as Vadodara, Surat, Saputara, Dhordo, Somnath and Mandvi as well. 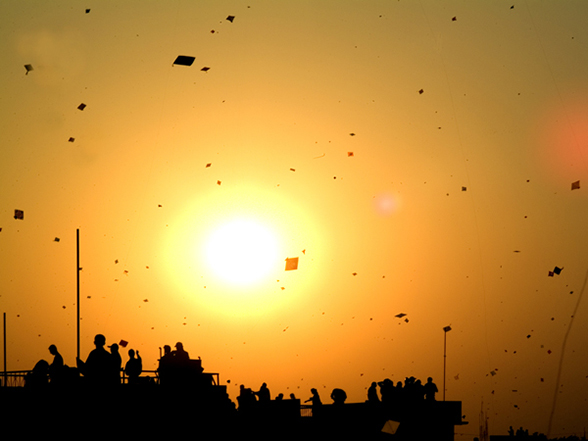 Coming back to the joy of kite flying, as children we were enthralled by the height gained by our individual kites and the competition was on who will fly the highest. Mastering the wind and preventing our kite from nose-diving was the main task at hand. However, we found greater joy in cutting down each other’s kites and run after them to capture our prize, which is known as ‘kite running’. Many of us fell into ditches and even from house terraces in our zeal to grab the drifting kites that have been cut loose in battle with other kites.

If you think I am making a mountain of a mole hill in highlighting the trivial issue of kite running, then you should read about the Afghan story, ‘the Kite Runner’. Rich Afghans used to employ a runner to go catch the drifting kites!  Similarly, check out the recent Hindi movie ‘Patang (The Kite)’ which was released in 2011, where a Delhi businessman takes his daughter to his childhood home in Ahmedabad in time for its annual kite festival.

Guilty - Right from frame one, the film succeeds in maintaining a 'stern' look and feel. Well, that's because the director wants the viewers to know that sexual harassment is a serious offence.
Read more
Art & Culture

Here are some delicious and healthy banana powder recipes your young ones will surely love.
Read more
Art & Culture

Resonance – An Indian Band for the New Decade

Resonance as a band is different because of their unique take on the iconic songs they cover. The songs that they usually cover are iconic, already having a substantial fanbase following the particular band or artist.
Read more
Art & Culture

There are various uses of metal. But when it comes to recognizing metal arts, there are a few distinct centers in India that are known for their regional metal crafts.
Read more
Art & Culture

The northeast itself, probably has the highest range of variety in its folk dances that reflect the tribal and traditional culture of the region.
Read more
Art & Culture

Madhuri Kathe has been known for the emphasis that her artworks are not premeditated, but are random and inspired combinations and play of colours. She has previously stated that her works are reflective of an unconscious deep rooted philosophy.
Read more
Art & Culture

Bali and wellness have an eternal relationship that needs to be experienced through their culture, food and their healing technique. If you plan to go to Bali, make sure you receive at least a couple of such healing spa rituals.
Read more
Art & Culture

There are various folk dances that are seen around these states of north India, and some even transcend state boundaries to integrate with the culture of the neighboring states.
Read more