“What moves people’s hearts, in every case, is the unknown. Things that people already know don’t excite them.” – Kenya Hara. 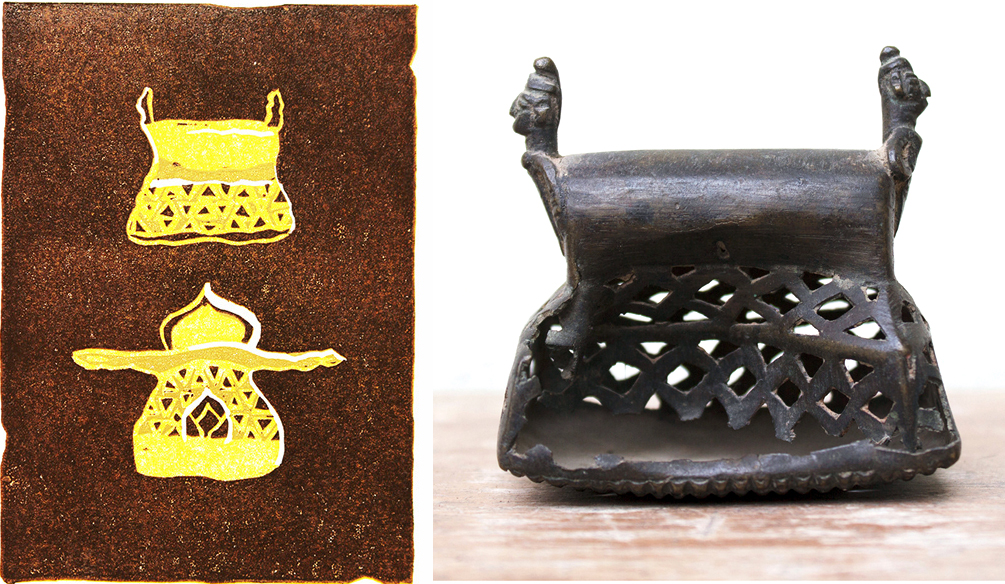 This quote constantly pushes me to look at the key things from different vantage points and think of different ways in which my work can tell a story makes a difference – however small it may be, says Sneha. Her thesis project ”Prajne” which means consciousness in Kannada is to pay a heartfelt tribute to the old age artifacts of ancient India. Let’s check out her story which inspired her to begin with the project.

Sneha Suresh, a 22year old graduate from Srishty University of Arts, Design, and Technology is a Visual Communicator and Print Maker. She is born and brought up in Goa and being a Tamilian and staying back in Goa most of her works are her inspired from her culture, traditions, surroundings, communities, peoples, and practices. She finds Lino Printing therapeutic.

When she came to know that she had to conclude her context with Gulbarga, through her mentor she got to know about the famed artist Mr. Vijay Hagargundgi.

Mr. Vijay Hagargundgi is popularly known for reviving the cultural tradition of the Surpura miniature paintings as well as his private collection of cultural artefacts from North Karnataka. After viewing his vast and unique collections and knowing about a gist of the historical stories about them, this time was the turning point which encouraged Sneha to pen down about some of the historical artefacts through her own perspective.

She was more spellbind to see a metal stick during her first visit of Mr. Vijay Hagardungdi’s grand house. As told by Mr. Vijay Hagardungdi the metal tool is called as Ookunikantha and it was used to write on palm leaves and it contained two holes. There used to be trinkets hanging from the top and when an author in the past wanted multiple copies of his work, he would prepare a batch of students to sit in front of him and dictate his work to them. While the students wrote on palm leaves, the trinkets would hit against the tool and make a sound. And if the specific sound was not in sync, the author would know someone had made a mistake.

As she was unallowed to take pictures, she decided to carve it out to represent it through Lino printing and give the ancient artefact and its narrative stories a new life through visuals.

The other artefact which represent a terrific conception is called Gaggra, an ancient anklet. These anklets are more than 200 years old and were worn by men of the Sudgard Sidhru community while they travel door to door to seek alms for their livings. Children in those past days would run back to their houses when they hear the sound of the Gaggras, as they were being falsely told that these men travel to villages, tie up the children and would seize them away.

Gangala, Banjara Community Plates are also one of the most magnetizing parts of his artifact collection. These are near about 80-100 years old. When the local people of  these communities were invited to another person’s house for a feast, they would carry their own gangala along with them. While the food was prepared, they would traditionally use the gangalas to produce music striking them against each other or by using a stick or by their hands and they would sing and dance.

In the above lino print Sneha has tried to morph the plates into manjeera and tabla to show that in addition to serving plates these Gangalas were also used as a musical instrument.

Through these project she want to make people more aware of the everyday artefacts of past and to question and think about their origination and uses. For sneha Lino prints and carved blocks are more like ancient stone tablets which were once an ancient mode of communication. And these left over blocks were the output as prints which narrates the story of their own.

As Sneha is very passionate about Lino Printings she says, One has to be very mindful while carving the block. I use to hurt fingers a lot when I first started lino printing. Developing a print in this case is an extremely slow process that teaches you patience, it helps develop a steady hand and is very very satisfying at the end.

In addition to the simplicity and the aesthetic of the prints that you get at the end the process means a lot to me.