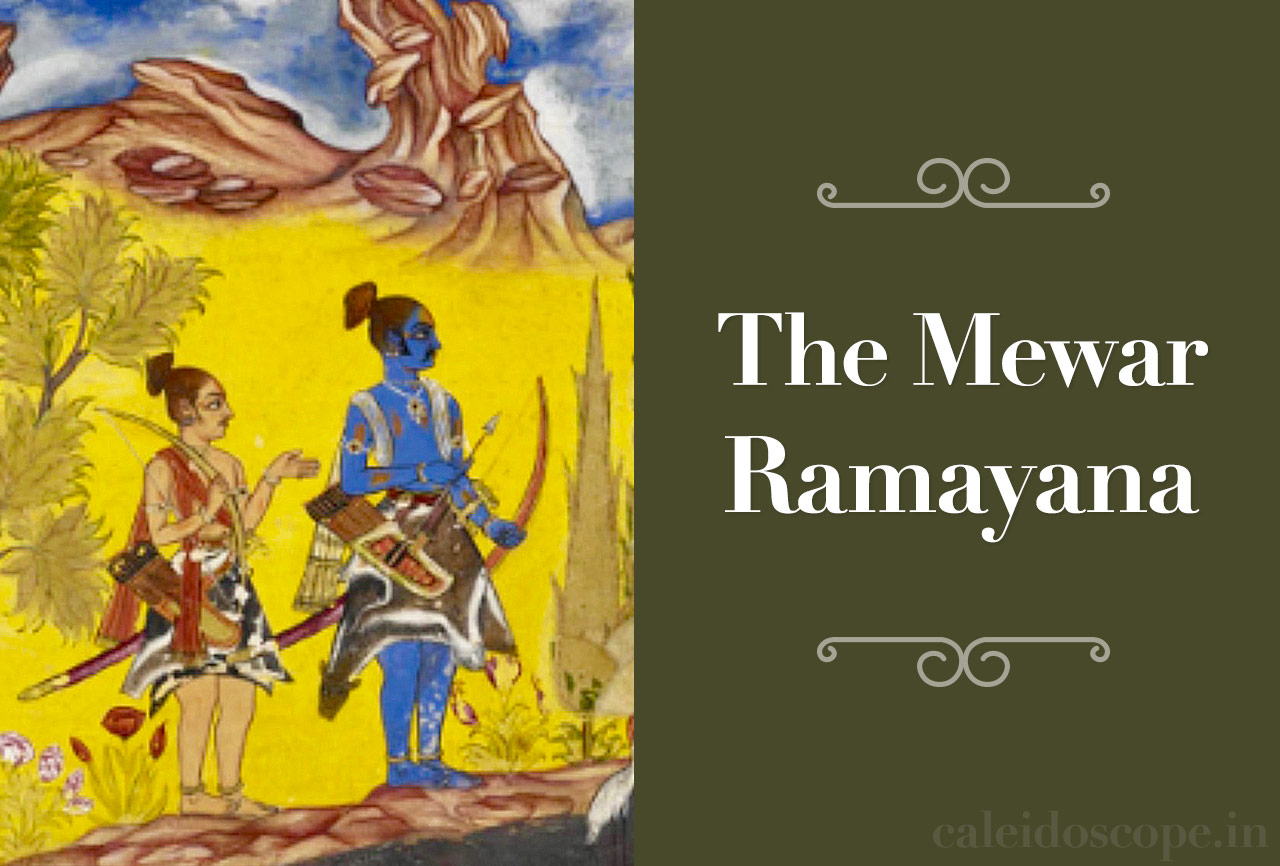 #Didyouknow that the Mewar Ramayana, an illustrated manuscript from the 17th century is a landmark in the history of Indian painting? And that you can see it online?

This is a historic illustrated set of the great epic and was commissioned by Maharana Jagat Singh (r.1628-1652), of the kingdom of Mewar, who had a royal studio at Udaipur from where he ruled. Mewar included Chittorgarh, Udaipur, Bhilwara, Pratapgarh, Rajsamand and Pirawa Tehsil of Jhalawar District of Rajasthan, Neemuch and Mandsaur of Madhya Pradesh and some parts of present-day Gujarat.

Mewar has a history of paintings made in the 16th century of texts like the Bhagavata Purana and Jayadeva’s Geeta Govinda.

A noted artwork related to Mewar is the Chawand Ragamala commissioned by Rana Amar Singh in circa 1605 while in exile, executed by Nisardin or Naseeruddin. The son of Amar Singh and grandson Karan Singh born in 1584 attended the Mughal court, so also Jagat Singh who was born in 1605. Karan Singh accompanied Prince Khurram on his Deccan expeditions in 1616. Jagat Singh had his first Mughal experience in 1615 at Ajmer and had impressed Jahangir. Jagat Singh noted that the Mughals made lavish illustrated manuscripts of the accomplishments of their ancestors.

It is notable that Akbar had got translated the Ramayana and Mahabharata into Persian with illustrations. A Rasamanjari illustrated set was made around 1620-25 in Mewar. Portraiture of the rulers were executed as well. Mewar has produced another notable Ragamala set executed by Sahibdin in 1628. Artist Sahibdin executed a Gita Govinda and two Rasikpriya works in 1630s. There is also a simple illustrated Rajput Ramayana from Central India from 1640 of which Jagat Singh was probably not aware.

The Sisodia Rajputs of Mewar consider Lord Rama as their ancestor and call themselves Suryavamshis; of solar ancestry. This might have inspired Jagat Singh to take up illustrating the Ramayana on a huge grandiose scale and he commissioned in 1649 what came to be known as the Mewar Ramayana which was finished in 1653, after his passing away in 1652.

Later Rana Raj Singh and his son Jai Singh continued production of paintings but mostly monotonous copies of texts like the Mahabharata. A Ragamala set was made under Jai Singh’s son Amar Singh II. During the 18th and 19th centuries, portraiture, festival and hunting scenes dominated painting at Mewar.

The Ramayana is one of India’s great epics, the other being Mahabharata. It is the story of the prince of Ayodhya, Rama, of the ancient kingdom of Kosala in North India. Ramayana or ‘Rama’s journey’ is attributed to the sage Valmiki and was composed some two and a half thousand years ago. Prince Rama was exiled for fourteen years, during which time his wife Sita Devi is kidnapped by Ravana, the demon king of Lanka.

The main story is about how she is rescued by Rama, his brother Lakshmana who accompanies him on his exile, with the help of Hanuman and the monkey army and Rama’s jubilant comeback to Ayodhya. It is interspersed with many sub stories. The enduring epic has over 20,000 verses which continued to reverberate across generations and became part of the Hindu ethos. The story embodies the Hindu ideal of dharma, Rama being the ideal man, Lakshmana the ideal brother and wife of Lord Rama, Sita Devi a role model of fidelity and conjugal love. The Ramayana is divided into seven sections called Kandas; Balakanda, Ayodhyakaṇḍa, Aranyakanda, Kishkindakanda, Sundarakanda, Yuddhakanda and Uttarakanda.

A stunning manuscript with exquisite illustrations which depict episodes from the great Indian epic Ramayana. It was executed between 1649 and 1653 at Udaipur, in Mewar by the atelier of Rana Jagat Singh. More than 400 illustrations were made of the epic. The work is divided into seven books and the scribe of the text is a Jain, Mahatma Hirananda. Several artists have worked on the manuscript, the most famous being Sahibdin, a master at the Udaipur studio. As already mentioned, he is known for his other paintings of the Geeta Govinda and Bhagavata Purana.

The masterpieces of the second and sixth volumes of the Ramayana are his contribution. These volumes depict excellent details and structure of composition which has not been surpassed in Rajput painting. The style of the paintings is Mewar-Mughal. There is influence of Deccan painting as well in the set of paintings. Art historian Vidya Dehejia notes of the narrative styles in the manuscript – the protagonist appears only once and meant to be participating in different events, events are depicted continuously and within a single frame, a single main event or episode is depicted or multiple events are depicted in a single frame.

Most volumes of the manuscript were gifted to Colonel James Tod (an East India Company official posted in Rajputana and who went back to England in 1823), by Rana Bhim Singh of Mewar.He gave them to the Duke of Sussex. Later the manuscript was purchased by the British Museum at a sale by the Pall Mall in 1944. These are now preserved at the British Library, London.

“This manuscript is also the most heavily illustrated Ramayana known, originally containing perhaps as many as 450 paintings. The large format of each individual painting is also remarkable. This was one of the greatest manuscript projects ever undertaken in India and required close collaboration between teams of painters, although a single scribe copied the text. Little wonder that the manuscript took five years to complete, from 1649 to 1653.”

Some parts are in Indian institutions like the CVSMS, Mumbai, Baroda Museum and Picture Gallery, Vadodara and in a private collection. However, given new technology, now it has been digitally reunited after being in different places, in the UK and India for 200 years and put online.

Check out this classic and amazing manuscript of the great epic Ramayana and relive the timeless story by clicking on the link below (works better on a desktop or standard laptop) – https://www.bl.uk/ramayana

Links to the images