McLeodganj, a place situated at an altitude of 6,831 feet set on the exquisite Dhauladhar mountain ranges is an epic place to visit. McLeodganj got its name after the Lieutenant Governor of Punjab D.F. McLeod who discovered it in 1848. It is famously remembered as an exile place for Tibetan spiritual leader the Dalai Lama and his followers who came here in the 1960s. That’s the reason why this place is so much influenced by the tradition and culture of Tibet. The Dalai Lama’s Temple also known as “TsuglagKhang” is a holy place which represents the spiritual connection of Buddhism to Tibet.

When it comes to food, McLeodganj has so much to offer to food lovers and is considered to be a paradise for exciting range of cuisine which is inspired by the culture of Tibet. It is the best place to feed the mind and body to feel calmer and most composed to the tune of nature. This place is mesmerizing not only in terms of its beauty and also in terms of astounding flagon of amazing cuisine. Food is considered to be a morsel of any culture and McLeodganj prove this point pretty well. That’s why; this place has so many popular eatables available in each corner of its hub. Let’s take a look at some of the most popular and astounding food items which are inspired from the Tibetan culture and make the place famous for it. 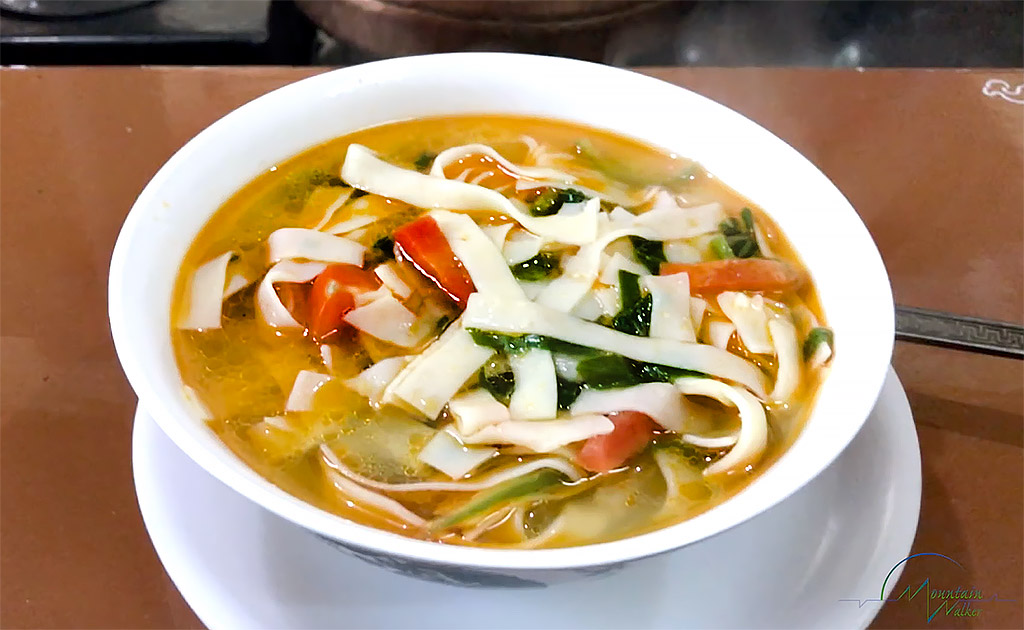 Thenthuk comprises of two words ‘then’ and ‘thuk’ which means ‘pull’ and ‘noodle’ respectively. Thenthuck is a noodles mixed soup which consists of broth, dough and meat. The cuisine is a spicy one which makes it a part of the staple diet for those residing in the hilly regions. It holds the power to make one feel warm even on the most frostiest day of winter. This Tibetan-inspired soup consists of various ingredients like mixed vegetables, cilantro and soy sauce. In the present day scenario, this recipe can  be altered to suit the needs of those favouring a vegetarian palate.

This cuisine is very popular in the Himalayan terrain. It has travelled from the mountains to different places and was redesigned to suit the region and the taste of the people involved. Today it is considered to be among the most popular dishes. The stuffing of the momos holds the true essence, giving it the right flavour and taste. The dough is well kneaded and filled with fresh vegetables or meat and finally steamed which brings the dish to completion. It is similar to the ‘Jiaozi’ in China and the ‘Gyozas’ in Japan. Momos can be prepared using a wide variety of stuffing suitable for both vegetarian and non-vegetarian needs.

When it comes to noodles, there is a wide range of variety involved which seems to have been influenced by the Tibetan cuisine. Noodles can be served with soup or without soup and is usually served alongside a mixture of either vegetables or meat. The fried noodles are redolent of China while the noodle soup is of Japan. Just like noodles, bread too has a wide variety right from flat bread to Balep korkun. Both noodles and bread contribute to the unique flavour and texture of a cuisine making it the most sought feature of Tibetan food.

The Bok Choy Soup is predominantly made using Bok Choy which is basically Chinese lettuce. Bok Choy is a plant which looks like cabbage nut is bitter in taste. Bok Choy can be used as a salad in its raw form and can also be added in the preparation of soup. Conglomerated with ginger, mixed vegetables and mushrooms, the soup is prepared in a manner which gives it an assorted flavour.

Thukpa is a form of soup made from fresh hand-made noodles; and can hence also be called as “noodle soup”. Thukpa originates from the eastern part of Tibet. Similar versions of it would be the Amdo Thukpa which is also very famous among the Tibetans. Amdo Thukpa is a Nepalese version of Thukpa and is a bit spicy but the constituents are quite similar in nature. The ingredients of the soup involve meat, flat noodles and an assortment of greens. Without Thukpa and momos, the Tibetan cuisine is said to be incomplete. This is why, they are  considered to be the “Liege Lord of cuisine “ by those living in the mountains . It is said to be highly nutritious and is a complete meal by itself. It is the favourite food of the locals during the winter seasons as it helps in keeping the body warm in the freezing weather and thus beat the winter blues.