To India’s third-largest state by land and second-most populous state, diversity comes naturally. Maharashtra is also known as the “Land of Scholars, Saints, and Actors,” as numerous Maharashtrians have achieved success in the professions indicated above. Maharashtra’s purogami tradition is well-known (forward culture). The term ‘Maha’ denotes a big area, but the word ‘Rashtra’ denotes a country. In terms of population, size, and culture, Maharashtra is a ‘Maha’ state. Maharashtra is recognised for its distinctive customs and traditions.

The state is home to a numerous range of cultural treasures and fascinating cultural variety. The communities have managed to preserve their distinct customs and colourful art, enhancing Maharashtra’s cultural fabric with their captivating traditions. However, with the development of contemporary marketplaces and the quick changing of lives, historical customs are rapidly fading. The following are some of the traditional art and crafts of Maharashtra:

Warli paintings are mural paintings with a distinct visual language, and they are a kind of tribal art. These paintings are from the Warli tribe, who live in the Maharashtra-Gujarat borderlands’ hilly and coastal locations. The painting’s fundamental forms – circles, triangles, and squares – are used to create holes that portray ordinary human existence. The squares signify a portion of enclosed land, while the triangles and circles are thought to be taken from the mountains and the Sun. The square is the major element in most ceremonial paintings, and within it is a representation of Palaghata, the goddess of fertility. Scenes of fishing, hunting, farming, festivals, dancing, and other activities are arranged around it.

These paintings, which are ascribed to a 2000 BCE society, are similar to the oldest artwork discovered in the Rock Shelters in Bhimbetka near Bhopal, Madhya Pradesh.
Today, designers and artists are using Warli paintings on clothing, purses, and book covers, among other things. 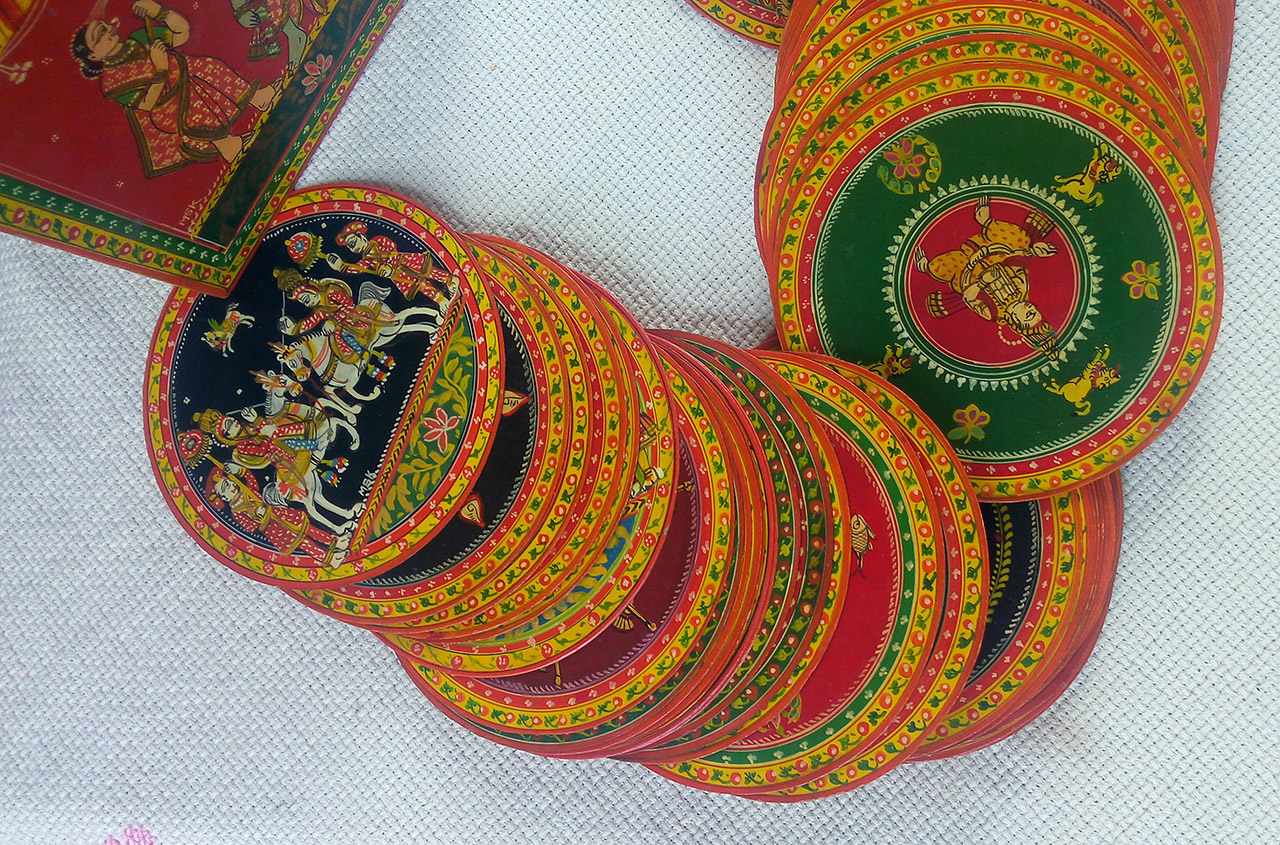 They are circular playing cards constructed of paper that has been coated with a tamarind seed powder and oil combination, then painted and lacquered. Darbari cards feature ornamental borders, while Bazaar cards do not. It was formerly a favourite hobby among Indian courtiers. The traditional Mughal ganjifa, with its 96 cards and 8 suits, found its way into the social milieu of India and the Deccan, where it eventually achieved universal appeal thanks to its themes and figures from Hindu mythology. The Dashavatar, which depicts Vishnu’s 10 incarnations, was the most popular. In Sawantwadi, Ganjifa cards were first presented. These cards were taught to the Chitari people in Sawantwadi, who are noted for their glassware and woodworking skills. Today, greeting cards are given as gifts. The cards are now used as gifts and teaching tools.

Maharashtra is a major producer of cotton in India. With such abundant materials, it’s only natural that the majority of Maharashtra’s traditional fabric-based arts and crafts make great use of it. Paithani sarees are mostly silk saris with rich, embellished borders, while Narayan Peth was initially a cotton and silk weave. The rich materials mashru and himroo are manufactured by weaving cotton and silk together on a special loom.

Narayan Peth sarees are made in Maharashtra’s Solapur district. The body of the sari features little patterns in the shape of rudrakshas and is characterized by large borders and brilliant colors. These saris, made of cotton and silk, have been a part of Maharashtra’s culture since 200 BCE. The most attractive feature of a Narayan Peth sari is the contrast between the color of the borders and the remainder of the sari.

Paithani saris are made in the Paithan region in Aurangabad District. The profuse gold zari embroidery on this pure silk woven sari, especially on the pallav, makes it stand out. The saris contain deep, rich colours, a thick gold pallav with designs like flowers, fruits, and birds like peacocks, and little gold bootis (motifs) dispersed throughout the length of the fabric.
Paithani saris are unique in that they do not employ mechanical ways to create their designs, such as jacquard. The patterns are all made by hand. Paithanis are quite costly and are only worn during rare occasions like weddings and festivals.
Mashru and Himroo
Mashru and Himroo are textiles that originated in the Aurangabad District in Maharashtra’s Marathwada area and were historically used to produce clothing for aristocrats. A specific loom is used to weave cotton and silk together, resulting in a sumptuous, distinct feel.

Suggested Read – Traditional Dresses of Maharashtra – The Beauty of Intricacies

The employment of gold and silver threads in the weaving gives these textiles their luxury. As a result, the finished fabric has a gold hue to it. Weaving by hand has become less popular over time as machines have progressively taken control. The strong patterns and vibrant colors, on the other hand, have helped these textiles maintain their popularity. Although Mashru and Himroo are sometimes used interchangeably, the weaving method is distinct. Himroo is regarded as more exclusive than Mashru since it needs more talent and is significantly finer.

Satrangi, sataranji, and other striped flat weave dhurries are woven on frame looms in Maharashtra, one of the country’s main cotton-growing states. Plain flat weave shatranji, jai namaz, prayer mats with single or many prayer niches, and chindi or rag dhurries are the three forms of dhurries woven by the Maniyar people. They come in a variety of sizes. Displaced mill workers from the Vidarbha region weave Chindi durries with the help and training of non-governmental organisations. Cotton dhurries are used as floor spreads for sitting or sleeping, as well as prayer mats with the prayer niche facing Mecca.

Beautiful decorations on fabric are created by the nomadic banjara people, who have their origins in Rajasthan. The Lamani women of Banjara create symmetrical needlework by raising the fabric’s wrap thread with a small needle and creating triangles, diamonds, and lozenges parallel to the weft thread, giving the appearance of an additional weft weave. They are experts in creating borders for long skirts, which are an important feature of their traditional attire. Embroidery in yellow, green, red, off-white, and black is usually done over a base cloth of handwoven madder (red-colored cloth). The needlework also includes cowrie shells and tassels. Because this stitching is arduous and time-consuming, it is normally done while the ladies are not working as sugarcane harvesters. 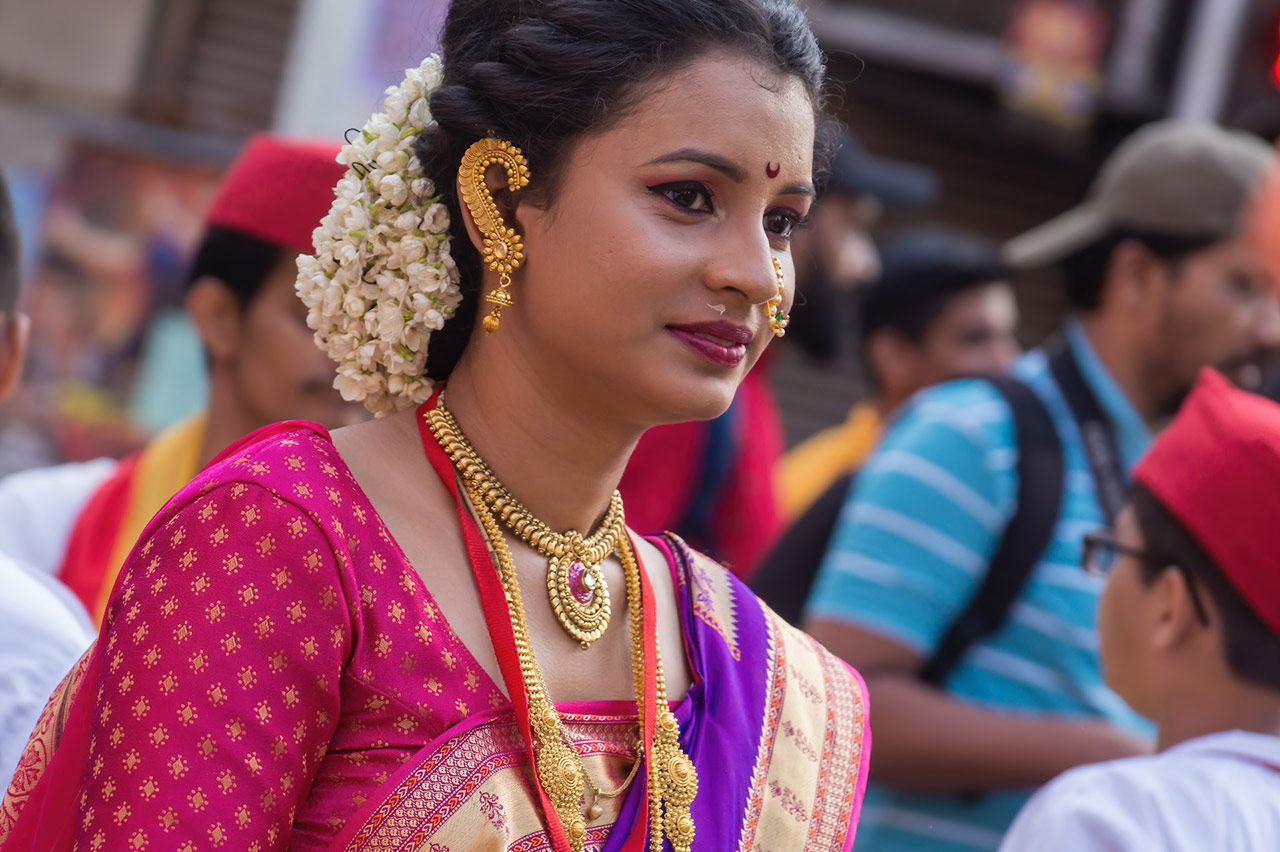 The majority of Maharashtra’s traditional jewellery is inspired by the styles worn by the Maratha and Peshwa kingdoms’ royals. Kolhapur is home to the most well-known of them. The Kolhapuri saaj is a necklace with 21 leaf-shaped pendants and golden beads. For married Maharashtrian women, this necklace is considered auspicious, and the majority of them wear it. The nath, a nose ring made of a gold string braided with pearls, precious and semi-precious stones, is another well-known adornment.

Silver objects, which were formerly an important element of Maharashtrian religious events, have now become a thriving industry. Untreated silver is first melted, then shaped and sized in rectangular moulds before embossing tools are used to produce elaborate motifs. The goods’ components are built separately and then soldered together. With a brush and soapnut powder solution, apply the final matt or gloss polishing. Hubris’ old craft is silver jewellery. Hupri silversmiths who specialise in popular oxidised jewellery add meenakari and motifs based on the delicate shape of the pope tree, champak, babul, and aonla flowers, as well as the ambi (mango).

Bidri is a sophisticated and polished method that uses intricate inlay and enamelling sequences and is only found in India. It is based on the Persian technique of inlaying gold and silver on steel or copper. Casting, engraving, inlaying, and finishing are the four separate operations involved. Sand Casting is an important part of the bidriware production process. A kalam is used to chisel the desired pattern once the object has been produced and smoothed with sandpaper and blackened, and then strands of silver wire are hammered into these grooves. Small bits of silver and brass cut from sheets are jammed in if the design is carved into bigger patterns. The surface is given a black colour and made permanent by rubbing it with a combination of earth and ammonium chloride after it has been gently heated. The inlay is exposed when the surface is polished with oil. Bidri makes use of a rust-proof, non-corrosive metal alloy that is thought to have been invented in Bidar. His style of ornamentation, which includes wonderful combinations of delicate lattice work intermingled with floral clusters, leaves, and flowers, is typically used on circular containers like bowls, as well as caskets, jewellery boxes, and other tiny boxes. Tarkashi (wire inlay) and tehnishan (wire inlay) are the two main methods (inlay of metal sheets).

Kolhapuri chappal production is a prominent handicraft sector in the area, employing about 20,000 people. Kolhapuri chappals are flat, beautifully patterned, handmade leather footwear created by a society whose hereditary vocation is tanning and leather work. Originally intended for farmers and field laborers, the footwear’s basic yet innovative design has appealed to a larger range of individuals all over the world. Leather cords are used to stitch the sandals together. Surprisingly, they are not made from nails. The plaited strips that embellish their top section are made of buffalo skin and beautiful goat leather. They are embellished with leather braids and golden zari (tinsel) threads and dyed in natural tan, deep maroon, mustard yellow, and dark brown colors. Traditional patterns use thong-like straps with a toe strap for added strength, but artisans today make simple variations such as kachkadi, bakkalnali, and pukari. Various designs, as well as the addition of new colors, have changed throughout time to meet current demands.

The Thakur community’s bamboo artisans create baskets, fans, containers, and ghaghada (rain shield) that are treated to repel moths and assure longevity, making them popular among the people. Basket weaving is comparable to textile weaving in terms of technique. Shapes are created using a number of processes. Bamboo work is practised by tribal people in Raigad and Thane districts such as Thakur, Mahadev Koli, Kokna, and Warli.

The craftsmen’ ability in Maharashtra is easily seen in the excellent art and craft finishes. Whether it’s the insanely unique warli paintings or the stunning Kolhapur jewellery, the states’ handicrafts truly represent its rich history. Thus it is no surprise that the Marathis take immense pride in their diverse culture and heritage!