We human beings tend to praise ourselves for our ingenuity and adaptability by which we have become the most dominating species in the world. Whenever a question is asked about who is the most intelligent animal in the universe, we pat ourselves on our backs. However, it would be appropriate to check if other animals on this planet are innovative as well. Just when I was wondering if animals are indeed smarter than us, I happened to hear a lecture given by Tata Sons Director, R Gopalakrishnan at a management institute in Bangalore way back in 2004. That was when I first heard someone talk about animals inspiring humans. I was really touched that someone in the world of business management, who does not deal with animals in his daily job, spoke of animal ingenuity. Here is a collection of inspiring stories of animal ingenuity which is just a tip of the iceberg for us humans to discover.

Blue tit and the Robin 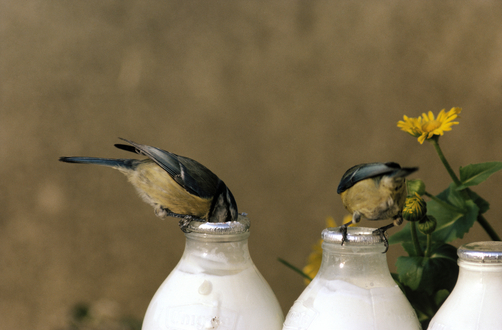 In England, in the early 20th Century, milk was regularly delivered to the doorstep of each house in milk bottles. However, these bottles had no cap and birds had an easy access to the cream which settled on the top. Two different species of British garden birds, the blue tits and red robins, learned to siphon up cream from the bottles and tap this new, rich food source. After the First World War, the UK dairy distributors introduced aluminium foil caps on their milk bottles. However, occasionally a blue tit would find its way to the cream by pecking repeatedly at the bottle cap. By the early 1950s, the entire blue tit population of the country had learned how to pierce the aluminium foil. This extraordinary institutional learning process happened because of one major factor – blue tits are communal birds that move from garden to garden in flocks, particularly during harsh winter when their food is scarce. However, the robins are territorial birds who do not allow another bird to enter their territory. So even though an individual robin learns how to pierce the cap of a milk bottle, its knowledge never gets passed to the rest of its species. Moral of the story – this is why birds of the same feather need to flock together! 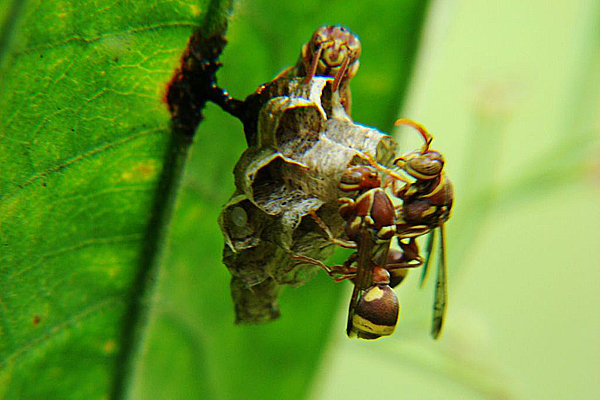 Who first invented paper on Earth? The Chinese or the Egyptians… What about water resistant paper… who invented that? Don’t bother, before both of these human civilizations invent paper, humble insects such as paper wasps invented paper, that water resistant one! Whoever has been bitten by wasps would not dare to call them humble! However, their aggressive defense mechanism seems to have outshone their nest building capabilities. Paper wasps are the members of the vespid subfamily, Polistinae, which gather fiber from dead wood and plant stems, mix it with saliva and use it to construct water-resistant hexagonal shaped nests made of gray or brown papery material. Their chitin-like saliva is primarily protein with high proline content. When mixed with the cellulose, it dries quickly and irreversibly to a water insoluble, water repellant surface. So human beings wake up and invent a water resistant paper which is biodegradable as well! 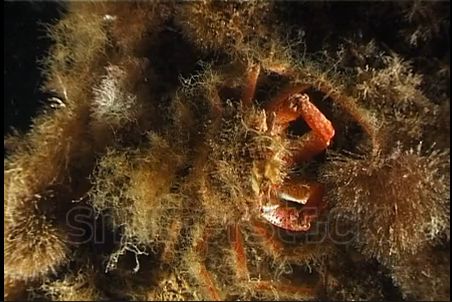 In nature, many animals create camouflages to escape from their predators or stalk their prey. Most of these camouflages are body modifications and colour mimicry of their surroundings. In fact a large number of species have survived in the nature due to their camouflaging ability. The sea spider is the most fascinating among them since it tries to mimic nature by actually wearing camouflage dress! Just like those army commandos who paint their faces and decorate their helmets during jungle warfare. Check the images captured from a video to see the sea spider emerge from its camouflage!

Heat up your enemy 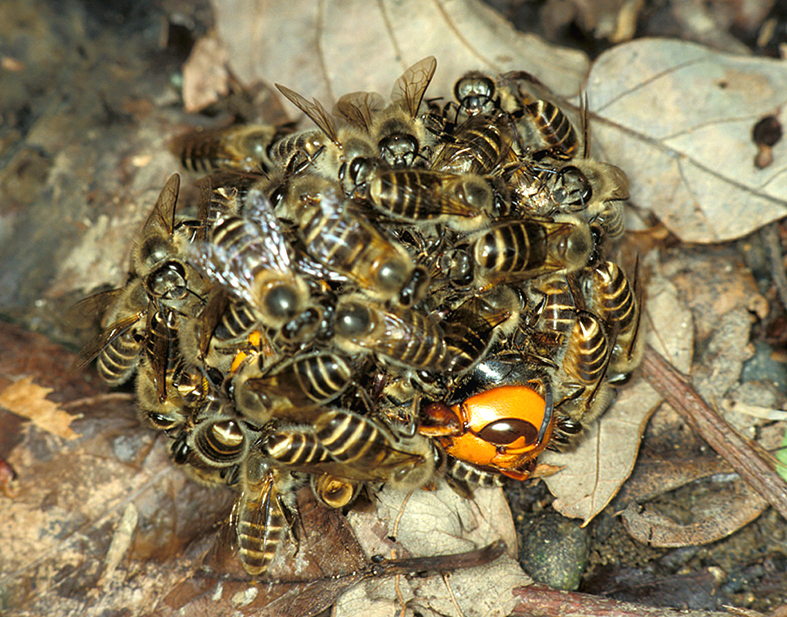 Honey bees are one of the most chronicled insects in history due to their industriousness. Human societies have tried to mimic the social hierarchy of honey bees, but we all know the results! There is another interesting defence mechanism evolved by honeybees which shows that a well coordinated action by a group of individuals can produce amazing results. A handful of Asian giant hornets can easily defeat the uncoordinated defences of a honey bee colony, but the Japanese honey bee (Apis cerana japonica) has evolved an effective strategy.

When a hornet approaches a Japanese honey beehive, she emits specific pheromonal hunting signals. When the bee guards posted at the beehive’s entrance detect these pheromones, they fiercely shake their abdomens known as ‘shimmering behaviour’ to warn others. Some of the worker bees exit the nest and wait outside. When the hornet moves in to attack, these bees surround it, forming a ‘hot defensive bee ball’. As many as 500 bees gang up to form a tight ball around the attacker. The heat from their vibrating wings and the carbon dioxide they respire proves a deadly combination. While the bees can tolerate heat up to 50 °C, the hornet cannot survive above the critical temperature of 46 °C. Some bees do die along with the intruder, but by killing the hornet scout they prevent it from summoning reinforcements that would wipe out the entire colony! Ah! Those Japanese!