When we think of wildlife, an image comes to our mind – trekking miles deep into the jungle, camping in the forest overnight, watching predators in their natural habitat, capturing their hunt through a telephoto lens camera, etc. However, most of us who are stuck in our mundane urban life are not blessed enough to undertake such adventures. What if we could get the same thrill here in our concrete jungle…

Whenever you need a quick dose of wonder that observing wildlife could bring, just step outside your house and investigate the trees and plants around you. Cities with greenery do teem with wildlife, Urban Wildlife – birds, insects, mammals, amphibians and reptiles.

Urban nature is full of drama and mysteries, just like spiders which have evolved to look like ants and moths to trick birds into thinking they would make a lousy meal by mimicking the appearance of moths that really are distasteful- and thus avoid being made a meal of. Some detective skills, a curious mind and a watchful eye are all you need. Wildlife watching also makes for interesting conversations with people who are curious to know what you are up to!

Next time you see something small and snake-like slithering in the sand or the undergrowth by your feet, swallow that yelp of fear. It is most probably a skink – a long lizard with reduced limbs that moves very much like a snake. There are about 50 kinds of skinks in India, but I’ve only seen the snake skink (Lygosoma punctata) or supple skink around residential areas in Bangalore. 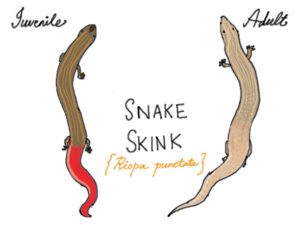 Juvenile snake skinks have a bright red tail, leading some to mistakenly think these skinks are poisonous. I am fascinated looking at their red tails wriggle as they move – seems as though they leave a trail of flame as they move! The juvenile skinks also have streaks on their body, unlike the adults that have spots and no red tail. These snake skinks are semi-fossorial (living underground) and have developed a particularly neat adaptation to prevent their eyes getting scratched- a transparent visor they can slide over their eyes. Skinks press their feet against their body to flee from a predator all the more faster. Interestingly, some skinks in Australia were found to have lost their limbs completely due to lack of use.

My garden is always abuzz with these tiny birds who visit flowering plants for their nectar. Seeming as though they are unable to make their minds about which flower to drink nectar from, they dart from one flower to the next – sometimes hovering in air – while calling shrilly others around them. They usually hang out in groups of two or more individuals. 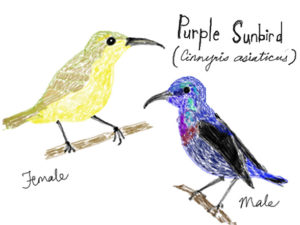 Purple sunbirds (Cinnyris asiaticus) are mostly nectarivorous, but they also feed on fruits and insects. They are huge fans of pumpkin and Indian ivy gourd. My neighbour had planted these two creepers and the sunbirds visit the creepers every day. The Singapore cherry tree is another favourite.

Sunbirds are a little smaller than sparrows and about the size of your palm. Like most birds, male and female sunbirds have a contrasting appearance. An explanation for this might be the difference in amount of care given to offspring between the sexes. The male sunbirds are a pretty indigo blue while females are a pale yellow with brownish olive-green wings. Next time you see them, try to look for signs of their breeding season (males develop a maroon collar in the front of their necks and a bright blue patch of feathers on their shoulder during breeding season) and notice males displaying their colours to prospective mates. 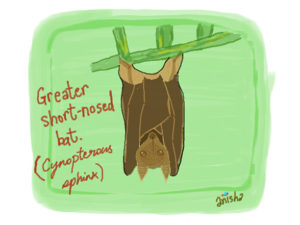 Cynopterus sphinx is found all over India. Their ears are lined with pale white fur. The male sports orange fur on its chin and body while the females have grey fur on their bellies. They are small and fly with rapid wing beats. As its name suggests the greater short-nosed fruit bat is frugivorous (fruit-eating). It likes guavas and bananas and is a useful pollinator (Read about the bats that took over as gardeners). It uses a keen sense of smell to hone in on fruits. Most other bats are insectivorous, while vampire bats feed on blood.

The bats reside in small colonies of ten to twenty individuals under leaves of trees or roofs of buildings and houses. When breeding season dawns, the male constructs tents made of stems for the female and the newborn pups. Bats are hard to identify while in flight, but if you have banana or palm trees, keep an eye out for these coffee-and-chocolate-hued bats.

How to identify animals?

There are plenty of resources online to help you identify the names of insects, birds and reptiles like groups on Facebook (Indian Birds, InsectIndia, Reptiles & Amphibians of India). Many states in India have a birdwatching club (BngBirds in Bangalore, Kerala Birder, Northern India Bird Network) which regularly meets on weekends. While primarily meant for birdwatching, you usually learn a whole lot more from the naturalists who come for the birding trails.