If you want to visit a hill station this summer, Andhra Pradesh is the place to go. The state is known for its serene getaways, which are surrounded by the majestic Eastern Ghats and deep forests. The state includes various attractive sites to explore and plunge into the grandeur of nature, from the popular Araku to the newly found Vanjangi. These lovely hill stations in Andhra Pradesh are a boon to both tourists and local Andhra residents because they allow you to escape the scorching metropolitan heat.

Araku Valley is one of the most beautiful areas in what is regarded as the “Food Bowl of South India” and is about 120 kilometres from the coastal city of Visakhapatnam, commonly known as Vizag. Locals from neighbouring cities, such as Vizag, appreciate the location because of its accessibility and lack of commercialization. With features of vegetation, noises, waterfalls, caves, and locals selling home-grown organic coffee, the undisturbed landscapes at roughly 3000 feet quiet the rushed senses. The coffee plantations and the mists that linger over it have made Araku Valley proud of its principal occupation, and as a result, it has grown in popularity to the point where people travel from all over the world to see it. Not to mention the allure of surrounding natural attractions such as the Borra Caves, which are illuminated by multicoloured lights; walking inside and experiencing the careful methods in which Nature works in delicate-looking yet sturdy rock formations many metres beneath the earth’s surface.

Araku Valley is accessible via a road that passes through dense forest, which is an experience in and of itself. There are numerous points of interest, including the tribal museum and the government silk farm, which is known for its mulberry gardens. There are several tribes in the area, and tribal culture is abundant.

Lambasingi is a tiny village in Andhra Pradesh’s Visakhapatnam district, located in the Chintapalli Mandal. The hamlet is set amid the magnificent Eastern Ghats highlands. Lambasingi, located roughly 1,000 metres above sea level, provides guests with a pleasant environment, a view of deep forests, and a relaxing weekend vacation. Given that numerous sections of Andhra Pradesh experience extreme heat throughout the summer, a journey to Lambasingi can be a welcome respite. Lambasingi is the only spot in the southern region that experiences snowfall, thanks to its picturesque valleys and chilly weather.

Unlike other hill stations, Lambasingi is still relatively undeveloped. Unlike Ooty and Kodaikanal, where stores sell spices, tea, and coffee, the customary bustle of a hill station may be missing. This is welcome news for those seeking a peaceful retreat away from the bustle of city life. While tourists swarm here on weekends, Lambasingi reverts to being a quiet community during the week.

Horsley Hills is a hill station on Andhra Pradesh’s southwestern border with Karnataka. It’s a lovely mix of Andhra Pradesh’s charms and the grandeur of the hills. It is renowned as Andhra Pradesh’s Ooty. This natural wonder, which stands at an amazing height of 4312 metres, is known for its breathtaking landscape.

This location, also known as Yenugulla Mallamma Konda, is home to the world’s largest Banyan tree and the world’s oldest Eucalyptus tree, as well as deep woodland areas with 113 kinds of birds. Horsley Konda’s magnificent nature also serves as a backdrop for adventure sports and activities as a trampoline, shooting, bow and arrow, wall climbing, water walking, rappelling, swimming pool, fish bath, and a little zoo.

Eighty-seven kilometres from Rajahmundry lies Maredumilli, a prominent tourist destination in Andhra Pradesh. If you are a true nature lover with a desire to learn about traditional tribal life, this is a place you should visit. There are rivers, rapids, and waterfalls nearby, as well as some quite interesting camping sites, making it an excellent spot for weekend picnicking. When the valleys turn green and vibrant with fresh flora all around, the rainy seasons draw the most visitors. From Kakinada, Vizag, and Hyderabad, Maredumilli is easily accessible. Visitors arrive in the morning and depart in the evening for a day trip. It’s a four-hour drive from Visakhapatnam and a 225-kilometer journey.

Maredumilli is also a great destination to visit if you’re a foodie, especially if you love non vegetarian food. Bamboo chicken is a popular dish in Maredumilli.

Nagalapuram is a tiny historical town in Andhra Pradesh’s Chittoor District, approximately 87 kilometres from Chennai. Sri Vedanarayana Swamy Temple and Nagalapuram Falls Trekking (also known as Saddhi Koodu Madugu) are two of Nagalapuram’s most famous attractions. This is one of the most popular hiking destinations around Chennai, as well as one of the best weekend getaways in Chenani for a two-day excursion.

Nagalapuram Falls is a pristine gem that offers a nice one-day trek from Chennai with a stunning waterfall view. Natural environment provides a perfect blend of hard climbs for expert trekkers and moderate hikes for beginners, resulting in an unforgettable experience.

The 12-kilometer (two-way) journey is normally completed in a single day, though some people camp overnight. The hike to the waterfall takes roughly 2 to 2.5 hours one way via rocky terrain and a slippery trail. The dense vegetation along the path provides natural shade, making it easier to walk on hot summer days. Midway to the falls, there are various water ponds that are ideal for a quick stop. The main waterfall has a large pool with crystal clear water at the bottom. The pool’s centre is estimated to be roughly 40 feet deep, thus swimmers should exercise extreme caution. 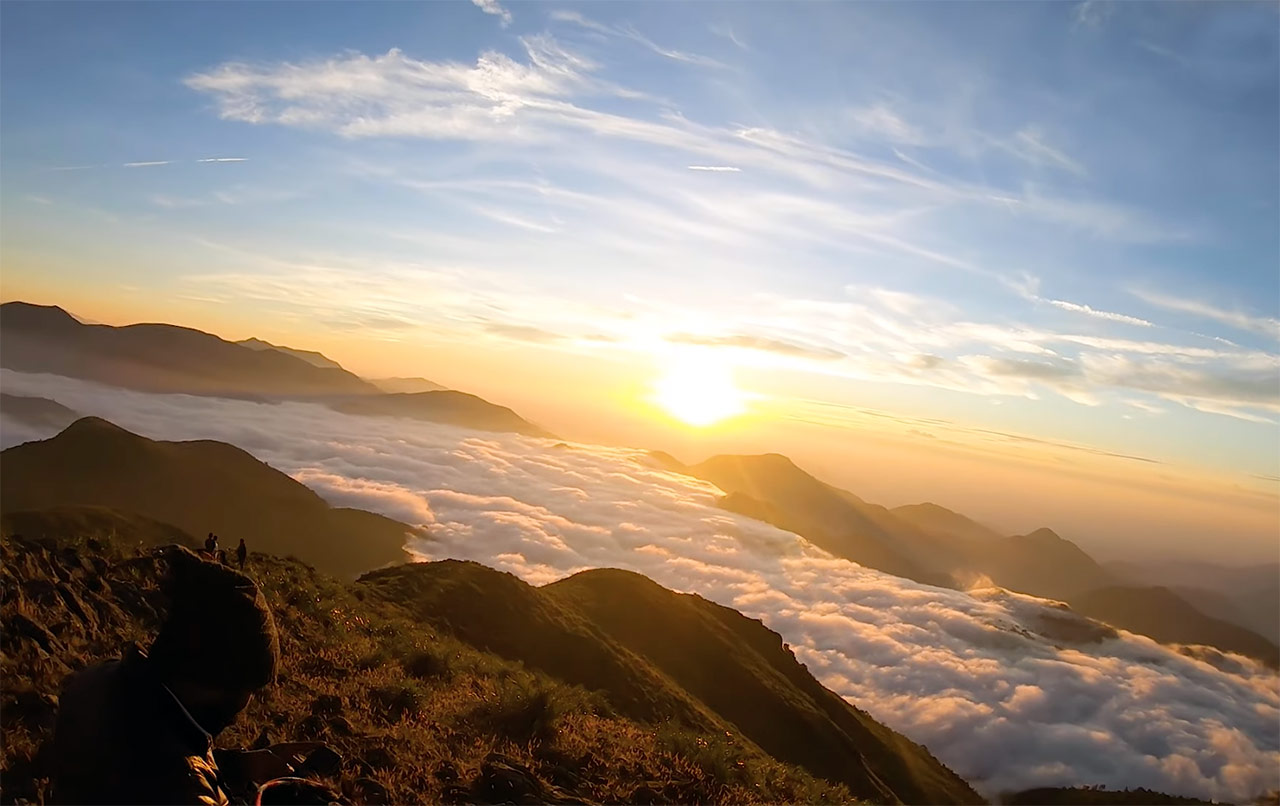 Vanjangi, located 3400 feet above sea level and about a 3-hour journey from Visakhapatnam, has become a tourist favourite thanks to the amazing sights on offer. Early in the morning, when you approach the vantage point at the location, scenes of dense clouds floating eternally amid the hills make a sight to behold. The most fortunate time to visit Vanjangi is at sunrise, when an orange twilight, visible beyond the cloud cover, proudly announces the sun’s arrival. While the village does not yet have any visitor accommodations, many people are choosing to camp in the open spaces.

The newly discovered hill station is affectionately referred to as ‘Megha Samudram’ by locals (ocean of clouds).

Nallamala Hills is spread throughout the regions of Nellore, Kurnool, Prakasam, Chittoor, and Kadapa, and is regarded as one of the most amazing mountainous places to visit in Andhra Pradesh. It has become a popular location for nature enthusiasts and photographers due to its captivating sceneries and lush green surrounds.

The hilly enclave also draws a big number of thrill seekers who want to ascend the magnificent routes that rise to a height of 4000 feet above sea level. With the Nagarjunasagar-Srisailam Tiger Reserve encompassing over half of its territory, it is not only a popular tourist destination but also a great place to visit for wildlife enthusiasts.

To top it all off, Nallamala has various religious sites where you can pray to the almighty while admiring the beautiful surroundings.

At an elevation of 1168 metres, the Ananthagiri Hills in the Ranga Reddy district, near Vikarabad, are thought to be the oldest location of wooded civilisation. It is a hiking heaven because the area has some of the best trekking routes. The city exudes a breathtaking and absolutely captivating elegance, infused with the aroma of coffee and the beauty of exotic vegetation. With surrealism in every element of the city, it is ideal for both honeymooners and family tourists.

Enthralling coffee plantations wash the entire slope in colours of light and dark green during the day. As the trek nears this Telangana hill town, the mesmerising image is mixed with the mists and haze hovering over the valley. The Musi River, which originates in Hyderabad and passes through the city, and the river’s waterfalls only add to the beauty.

Papi Kondalu is a breathtakingly beautiful hill range that stretches along the Godavari River in the Andhra Pradesh districts of East and West Godavari. The Papi Hills are a group of three hills in East and West Godavari districts that form a magnificent canyon on the Godavari River. The entire area of Papi Kondalu is covered by tropical rain forests, and it was recently designated as a protected National Park, making it one of the best destinations to visit in Andhra Pradesh for tourism. During the post-monsoon season, the boat service between Rajahmundry and Bhadrachalam is a terrific experience. Tourists can participate in activities such as camping and trekking in addition to admiring the views of the hills, valleys, and waterfalls. Papikondalu is 191 kilometres from Visakhapatnam, 159 kilometres from Visakhapatnam, and 439 kilometres from Hyderabad.

The Nagari Hills are a circular mountain range that rises to 1,050 metres above sea level. The “Nagari Nose” refers to the conspicuous and highest cliff of the hills, which protrude to one side in the shape of a human nose. Around and from the Chennai lighthouse, it can be seen for about 100 kilometres. This cliff, located about 7 kilometres north of Nagari, rises to an elevation of 855 metres above sea level and is known as the “Nagari Murkonda” During the mediaeval period, Nagari Nose acted as a lighthouse for guiding navigation in the Bay of Bengal, as the nose served as a marker for ships approaching Chennai. The cliff has recently been used for mountaineering and range practice. A 12-kilometer jeep track is available, and the area is also good for cycling and hill running. The grasslands surrounding the lake are suitable for camping. Food is provided by the temple priests, and there is also fresh water. The journey to the temple and falls takes about three hours; one can picnic there and return, or remain the night.

The hill stations of Andhra Pradesh will surely satisfy your wanderlust wants if you are desperate for a new area to explore. Pristine, unaffected by modernism, and appealing in their own way, these sites offer both serene and relaxing vacations and thrilling adventurous ones as well. The tranquil beauty of these hill stations will definitely entice you to keep coming back!