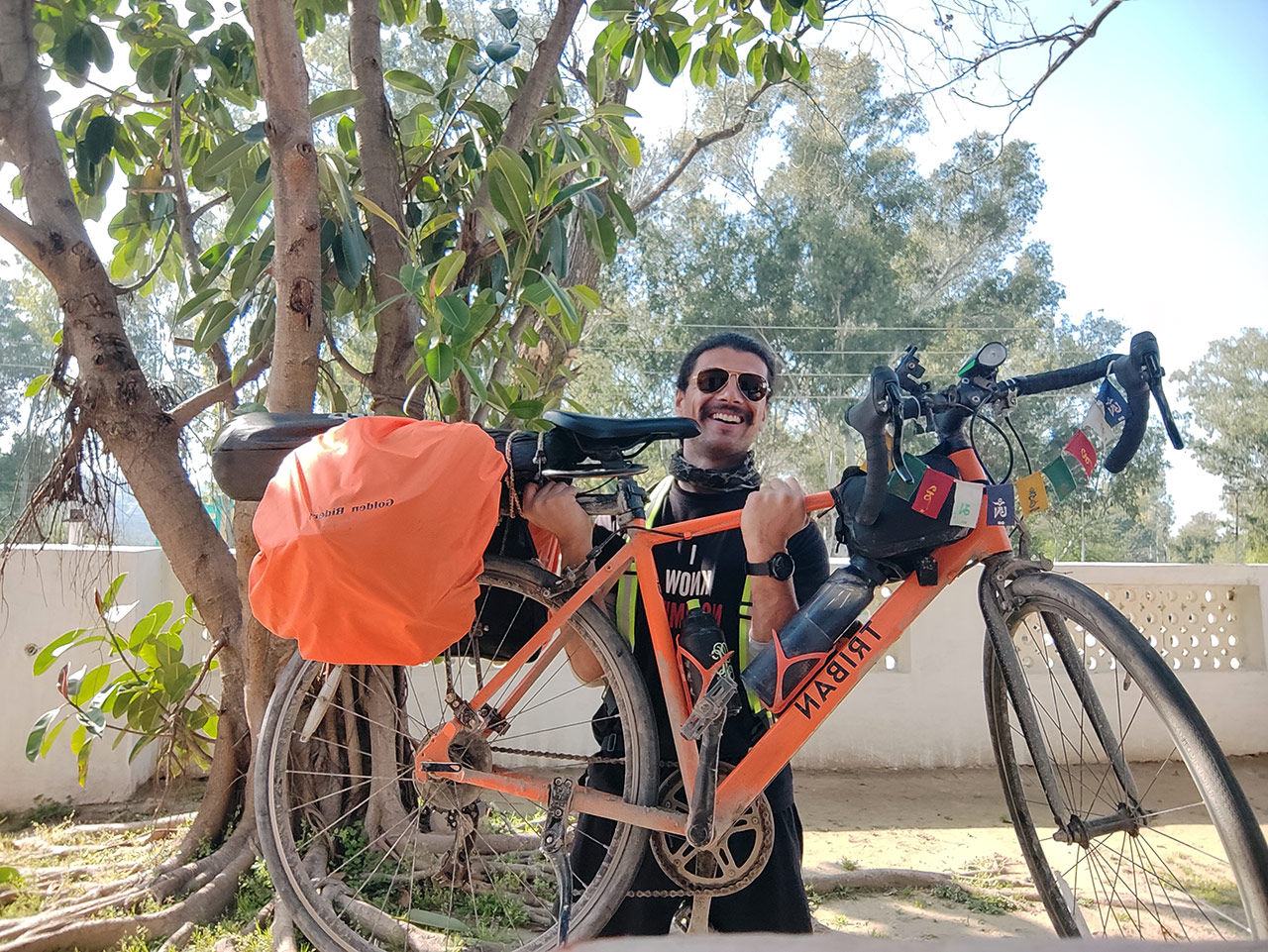 A young Kashmiri has set an example for youths in these trouble times. Salwat Hamrah, 32, is an entrepreneur, an adventurer, a yoga teacher and practises meditation.

On March 1, Salwat embarked on a 4,500-km cycle expedition from Kashmir to Kanyakumari called ‘Hope Monk – K2K’. This was his first such journey intended “to push my mental and physical limits” as he puts it.

His friend from Pune Saurabh Sharma suggested to Salwat to add a social aspect to his plan and the thrilling cycling expedition began. Salwat wanted to raise funds for the underprivileged children studying in the Wonder School being run by his banker-turned-educationist friend. Sharma and his colleague, football coach Ryan Roy Shah are training these five children, including two girls, to become professional football players. The Potter’s Earth Foundation, an NGO, is bearing the expenses of these children’s coaching and studies.

When Salwat started his adventure, he had not expected the second wave of the pandemic to rage suddenly. As he approached Gujarat in the last week of March, the cyclist realized that it would grow as major cities in Gujarat had started clamping measures. Determined to continue with his mission, Salwat peddled on.

“By the time, I reached Pune, cases were rising exponentially and there was weekend lockdown in Pune. We had planned a media interaction and I also wanted to spend some time with the children. However, I had to cancel that plan and headed towards Kolhapur,” said Salwat.

In Kolhapur, he had symptoms. So, he decided to take a pause in Goa and planned to cycle further. However, he tested positive for Covid-19. Unwillingly, he suspended the expedition mid-way. However, Salwat Hamrah had already covered 2,500 km and got valuable experience.

Even halfway through, he had achieved a lot as it was his first such expedition. Salwat shared a few interesting experiences that he had. “I reached Pushkar in Rajasthan. I was sitting on the bank of the Pushkar Lake when an old destitute old woman came and sat by my side. She had a small packet of biscuits and offered me biscuits. I got startled. She probably had to survive on that little packet that day and had magnanimity to offer a few biscuits, which one cannot imagine if one is hungry and has little food. I felt touched. This kindness of ordinary people, I experienced throughout my journey.”

Another experience he dubbed ‘magical’ and ‘miraculous’ on the very first day of his expedition. He had to travel to Banihal from Srinagar, a 110-km distance. However, cycling was tough due to the mountainous area. “After 25-km of ascending road, my knees were paining. When I reached Banihal, I could not cycle. I was limping and visited a physician. I underwent physiotherapy and got medicines but pain persisted. Then I got a call from my friend who is a Reiki master. She offered to help with Reiki. Any help at that point was welcome. I decided to give it a try. We had a video call in the evening. Next day morning, my knee pain disappeared. I do not know whether people would believe this, but it was a magical remedy,” said Salwat.

He added, “It was a beautiful experience. Some technical glitches in my bike were also fixed. If you decide to continue, things automatically fall in place. Had I decided to give up then, the trip would have ended on the very first day.”

Drawing parallels between a meditative state and the thrill during an adventure, Salwat said, “When you are rafting in a ferocious river current, you forget the past and future. You realise during a thrill that life is so beautiful. You are totally focused in the present moment, on rafting. This state resembles a meditative state. It helps you be in the present moment and face reality as it is. Thus, you are able to tackle challenges skillfully.” Salwat has been running his venture ‘Beyond Limits’ from Bangalore for the past seven years.