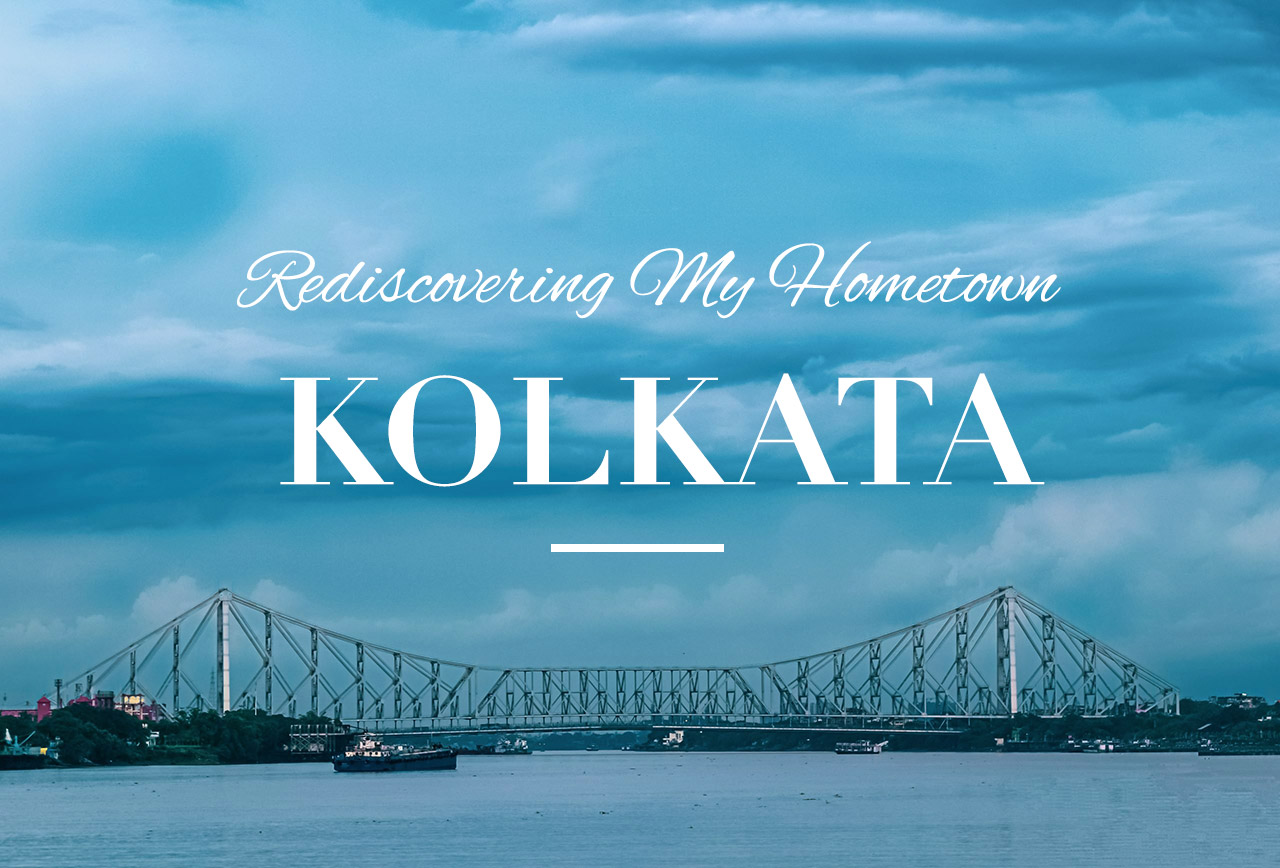 The most exciting thing that can happen to a bong child staying outside of West Bengal, as we call it Probashi Bangali, is waiting for summer vacations and Durga Puja holidays when your parents take you to Kolkata. Since childhood itself, Kolkata had always fascinated me and I had found it interesting not just because it was my hometown. Rather because I had always found a personality in the city. Obsession with phuchka, love for art, music, communist ideologies, neighbourhood football match are just to name a few. If people were to ask me how I would describe the city’s pulse, I would sum it up with the movie title, mach, mishti and more. But all I knew of my parent’s hometown were in short pauses from my routine school life. Then came undergrad college where I lived in the city for 3 years, yet I never got the chance to explore the city and catch it by its breath.

Then the collective gloom dawned upon humankind as the pandemic turned our lives upside down. I returned to my hometown only to know it better on my terms, one day at a time.

And, this two-year refuge in this oddball of a city, which I call my hometown, has given me a chance to rediscover it again at a period in my life where maybe this was what my young adult self needed to find a nest of familiarity and comfort.

Exploring the history of Synagogues and Jewish Community

How little does one know of the history behind the beautiful things that you nonchalantly routinely pass off? I have passed a red-coloured European architectural tower resembling that of a Church in the Bara Bazar area many times. But little did I know of the historical significance behind it.

Kolkata is a potpourri of culture. Among such cultural heritage in the city, lies that of Synagogues and the Jewish community. Magen David Synagogue, constructed in 1884, was the first synagogue established in Kolkata after the Baghdadi Jews settled in the city in return for business opportunities. As the Jewish community rose to prominence with their unforgettable contributions to society, they built Asia’s most ornate and largest synagogue in the Italian Renaissance style and it’s a treat to the eyes to look at. The floral pillars, stained Belgian glass, wooden sitting benches imported from Glasgow carved in it, are any architectural lover’s paradise.

Lying at a one-and-a-half-hour car ride away from Kolkata, once a thriving French colony during British Rule, Chandannagar now lays back and enjoys the attention it gets from travelers and explorers, who visit it for a quaint escape from Calcutta’s cacophony. Hooghly flows by the city and a deck of colonial buildings who had passed the test of time adorns a long street called ‘Strand’. Walking in the strand glittering with antique street lights by the riverside reminds you nothing short of the iconic scenes from ‘Midnight In Paris’. The quaint alleys, the French-inspired bungalows, and mansion, iconic sweet shops are resplendent to experience. This elegant town is extremely slow-paced which soothes you like a lullaby. Time stands still by the river if you witness the transition of a day to dusk, reminding you to take a break and softly listen to your heart sitting by the river and enjoying the simple pleasures of life.

An early morning stroll in Kumartuli during Pujo

Durga Pujo is the nucleus of Kolkata and Bengalis. As I have grown up in a small town outside of West Bengal, I had never really got to witness the Goddess during the making before Pujo. Come to the fun-filled, merry-making auspicious celebration of Pujo, I had only seen the Goddess once it’s complete. I had always heard tales from my mom that the idol-makers draw the Durga’s eyes, which marks the event of ‘Chokkudan’ (bestowing eyes) right before the beginning of the Pujo, ‘Mahalaya’. 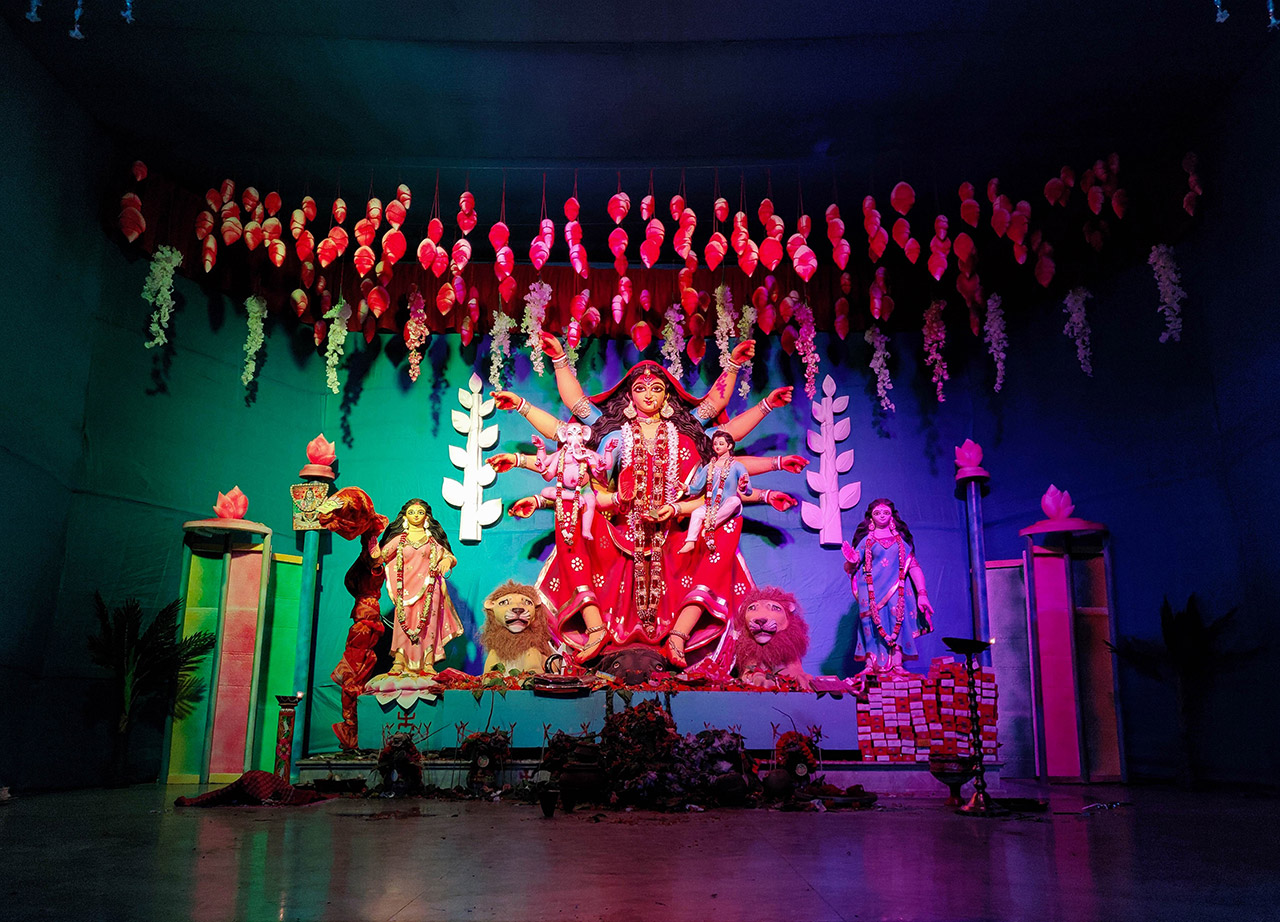 Taking advantage of being in the city before the grand celebration of the year, one fine morning I set out to explore the lanes of Kumartuli. The name is derived from the age-old practice that the artisans started in these North Kolkata lanes as ‘Kumor’ means potter and ‘tuli’ represents any small space in native Bengali. Generations after generations of the artisans’ families are in this business of idol-making. The place is also ideal for the idol-makers to settle here since the days of yore as it lies close to Bagbazar ghat and the clay required for the making is easily borrowed from there, locally called as ‘Ganga Mati’. I asked one of the artisans, who was concentrating on moulding the shape of one idol, if most of the idols in his shop are sold this year. He proudly said that all are sold and most are going to bidesh (abroad) because of NRI demands. It is unruly to watch humans giving shape to the Goddess out of clay, mud, and straws. There are also shops selling many décor pieces and embellishments for the idols. Not only Durga Pujo, but Kali Pujo, Laxmi Pujo are all busy times for all the workshops nestled in the lanes of Kumartuli.

Lazy walking in Maidan and Victoria

Because of the pandemic and lockdown-induced days, with fewer people on the road, it always felt like the city was all mine to explore, all mine to experience. And, maybe because of fewer distractions, I was able to notice and listen more. Like if you take an evening walk on the city’s roads right before dawn, no matter which corner of the city you are at, the shrill sound of conch shells blown at every house on every street at almost the same time, is a ritual you will get to witness. Like a secret truth binding two people together, this small ritual binds every house here in each corner of the city.

The city’s conundrum of whirling emotions and moods, of office-goers, of cha sessions, is at its peak in the morning till afternoon, it fades slowly in the evening as Rabindra Sangeet plays at the loudspeakers in Maidan. Many colourful blooms like red and pink bougainvillea form a lush oasis of trees in the wide well-maintained lawns inside the locality of Victoria.

While you leisurely step out in Maidan, you notice the kids who were playing football have finished their match and are now heading home, parents with their pets waltz in for a quick stroll, lovers sneak in for the moon-lit pathos, hand-in-hand, arms-in-arms, masks in place with sheepish smiles of wild pursuits.

…and this is a land of magical sunsets

Each sunset in the city has its own charm. The sunset in Princep Ghat turns the sky soft lilac, the sunset in Rabindra Sarobar lake is a soft dewy calming you down, while the sunset in Eco Park is pristine and melodramatic to witness.

There are innumerable hidden stories to tell about the city of joy and unspoken sweetness to be discovered in the alleys of this city of ageless romance that one can never get enough of in one lifetime. But maybe, for now, catching magical sunsets of myriad colours is the best one can come across to loving the city a little more.