Roopkund Trek – Chasing Tranquillity All the Way to 16000 ft

One of the best treks of my life was to Roopkund, a glacial lake situated at a high altitude of approximately 15,750 feet in the Himalayas, in the Northern Indian State of Uttarakhand. It lies in the shadow of the famous Trishul peak and is accessible by a 5 day trek from the town of Lohajung in Uttarakhand. I undertook this trek in May 2016, through India Hikes. 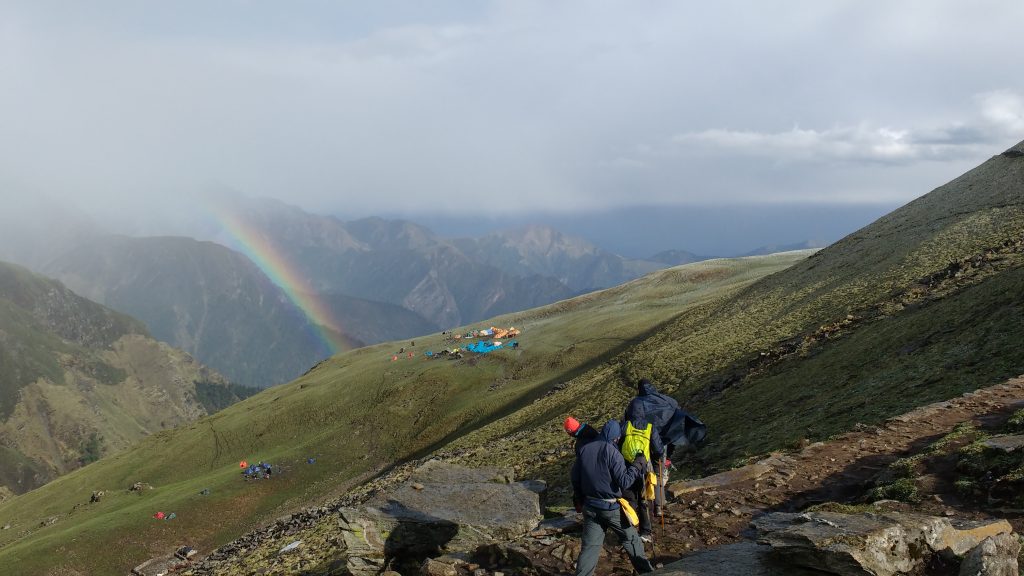 From where I was, I could not see a thing. My eyes were wide open but the mist surrounding me was all-pervasive. As I sat there for over an hour, in the bitter cold weather, I remember thinking, after four days of back-breaking climbing, I had finally found tranquillity. I was sitting on a rock overlooking a vast valley, circled by mighty snow-capped mountains. There was a waterfall somewhere close. I could hear the sound of falling water. I could hear the wind finding its way through the mountains. I could feel the soft snow flakes falling on my face.

Actually, this was not even the summit of the Roopkund Trek I was on. But such was the magnificence of the majestic mountains around us, that I was no longer focused on just the summit. The journey itself was throwing mind-blowing surprises, one after the other. They said the first day’s climb would be the hardest. Well, it was. But what was harder was to have dinner while a massive storm lashed at our camp-site. But the mountains, by their very nature, were fair and just.

While we bore through heavy rains in the evening, when I stepped out of the tent in the middle of the night, I was greeted by thickly forested mountain sides drenched in the pale pure glow of the moonlight. The forest itself had fallen silent. As if it was enjoying this gentle light that was bathing it. While I stood there spell-bound, forgetting all about why I’d stepped out in the first place, the stars started appearing in the thousands. Even with the bright moonlight lighting up the sky, there were a million more stars than I remember seeing, ever. 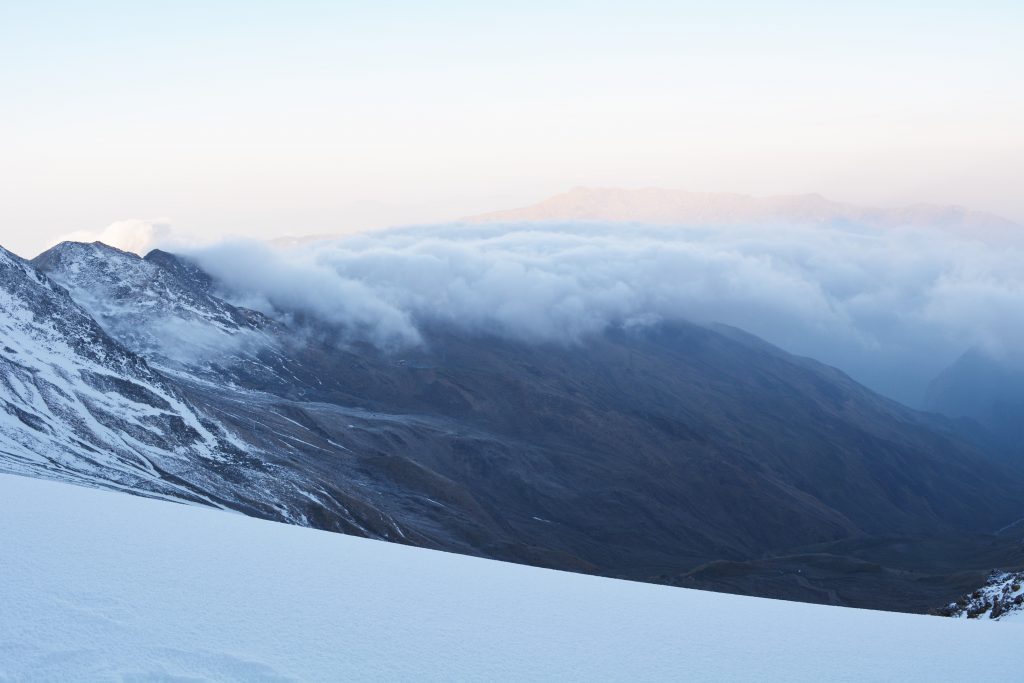 The next day brought us a steep hour-long climb through thick moss-covered forests. Soon enough, we crossed the tree line and then the shrubbery. It was just about the time when clouds were forming overhead that we cleared our way into one of the most magnificent parts of the trek. The high winds and drizzling rain made an ideal setting to witness one of the largest high-altitude meadows in the whole of Asia.

Ali Bughyal, in all its splendour, lay right in front of us, rolling along on gentle slopes of mountains as far as the eye could see. Such was the magnificence of this piece of heaven that not a single one of us could describe it for a long time. We spent a long time in a small hut on one of the hillocks, partly because it was raining and partly because nobody wanted to leave. We walked around, listened to the howling wind, felt the rain drops lashing our faces, essentially submitting ourselves to this wonderful piece of nature. Alas! All things must come to an end and so did our time on these meadows. But fortunately, this was not the last of the breathtaking sights we were going to witness. We had just crossed 13,000ft! 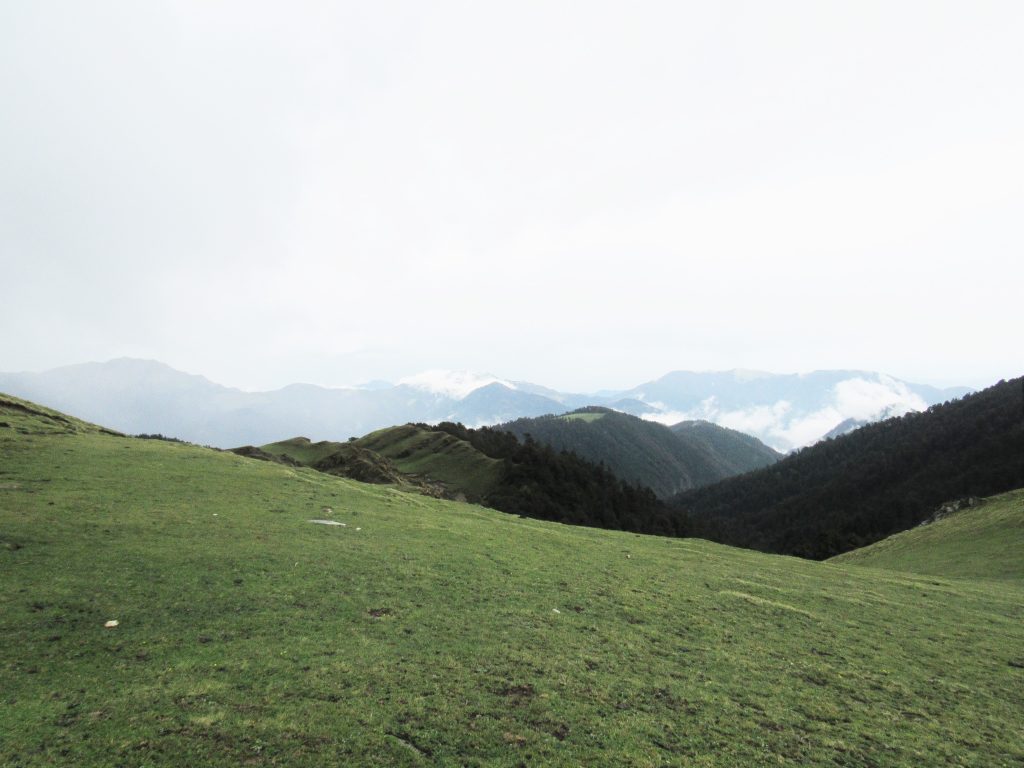 There was a storm that night, while we huddled into our tents at the Bedhni Bughyal Campsite. I am sure there were a few instances when our tent almost flew off. No one dared to step out. The next morning though, we were greeted with the entire mountain range draped in a thin veil of fresh snow. The colour scheme of the entire range had turned from Brown to White. The best part was, the day’s trail passed right through those hills. The next leg of our trek to Pather Nachouli started from there.

Pather Nachouli is essentially rocky terrain. Legend has it that God’s wrath turned a whole bunch of dancers at a King’s Court into stone in this area. It snowed again that evening. Only this time, it was gentle and beautiful and it happened while we were drinking Chai at a local shack. Imagine our joy! That night however, the storm returned with full fervour. This place was by far the windiest campsite on the trek, so far! It was getting more and more difficult to breathe. The air was thin. We were walking in micro-steps. Worst of all, it was freezing cold! No one dared touch water anymore! We were at 14,000ft! 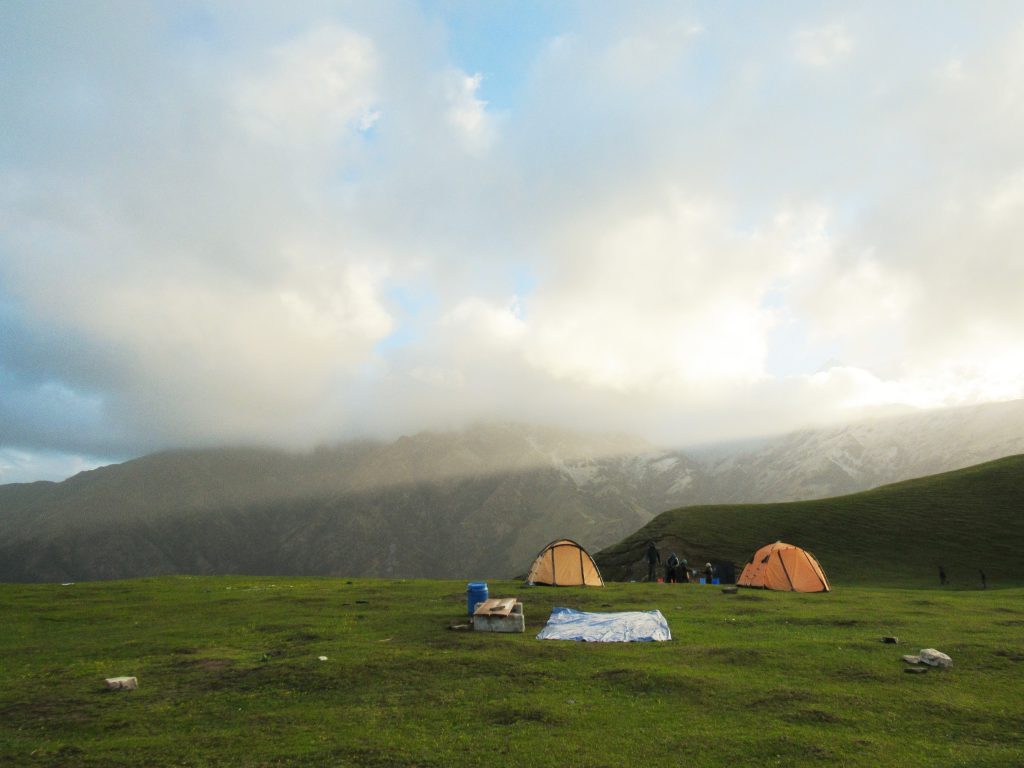 The next day’s trek gave us scenes right out of the Lord of the Rings trilogy. While the mighty white mountains were still our constant companions, the very ground we were walking on had turned rocky and wobbly! It could very well have been the Kingdom of Mordor! The destination was Bhagwabhasa – our final campsite before the summit. This was the coldest campsite yet and the entire place was rocky terrain. Even our tents were pitched on shaky rocks here. The plan was to sleep early and start the final leg of our trek to the Roopkund Summit the next morning, at 3 am. We had already been trained to trek the shoe spikes. Now we just lied down and waited.

As planned, we headed out for the summit around 3 am. It was pitch-dark and we were walking on thin ice and wobbly rocks under headlamps. Ice and snow were ever-present at this altitude. The most thrilling part of our trek had just started. I could possibly find a hundred adjectives to describe this part of the trek. But the video would still beat my description by a mile –

Three hours we climbed, one micro-step at a time, on near vertical snow walls. Digging our spike in as deep as possible. And when we did finally arrive at the summit, it was the culmination of four days of arduous climbing among breathtakingly beautiful mountains! We were close to 16,000ft, and we were experiencing true tranquillity!

Here is the link to the map location of Roopkund Lake: