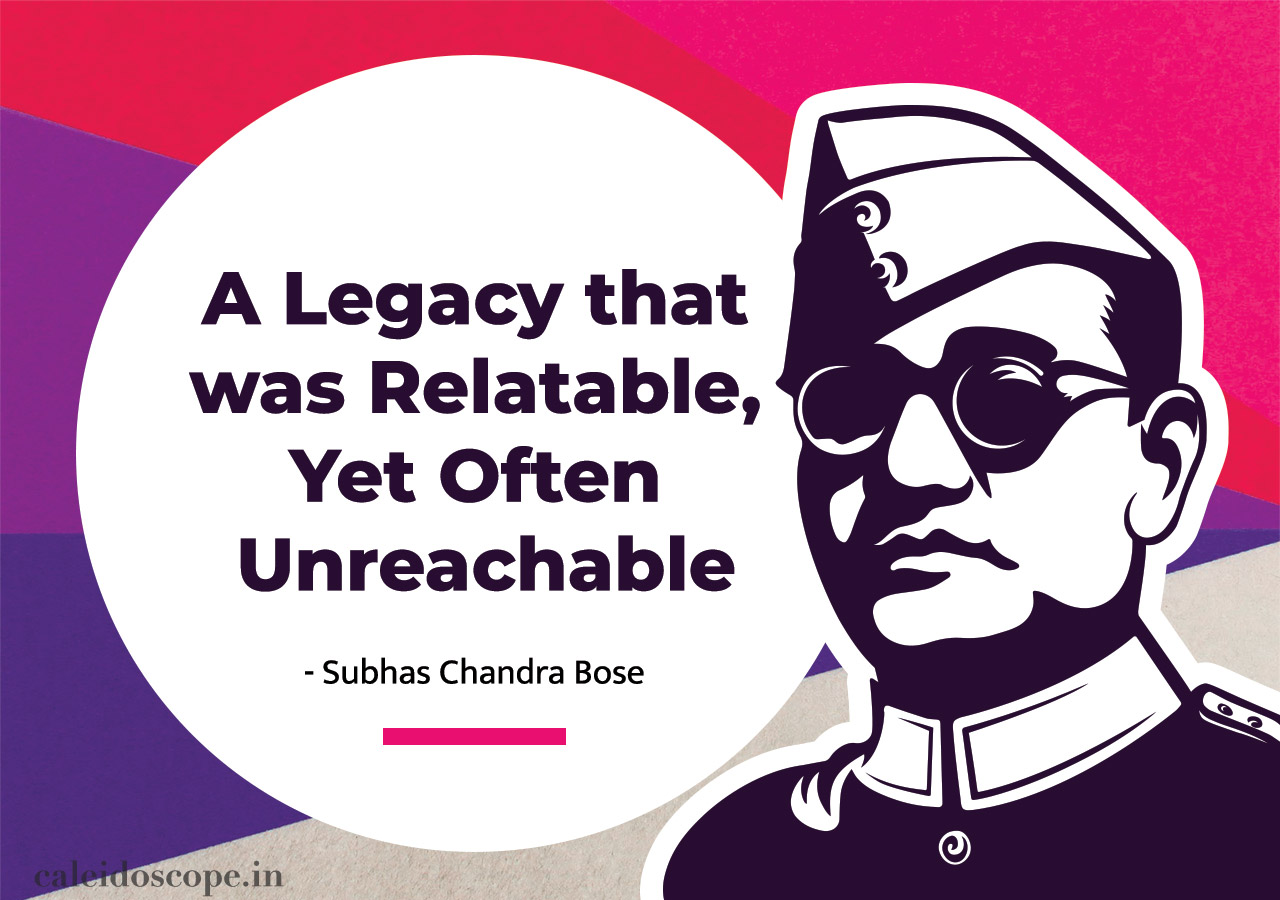 The Indian Independence struggle has been witnessed by several stalwarts and legends. These individuals have stood tall in the face of adversity and been the pillars on which the freedom struggle was built, executed and Independence finally achieved. Mahatma Gandhi, Nehru, Sardar Patel, Bhagat Singh the list is truly very long. But whenever the 23rd of January makes its way, I am reminded of the heroics and vision of one freedom fighter in particular. The day marks the birth anniversary of Netaji Subhas Chandra Bose. Growing up in Kolkata, West Bengal it was hard to not learn about Netaji, his ideologies, and his brave call for complete freedom.

As a child growing up in a state that was governed by communist ideals, Netaji’s callings were widely relatable. Add to that the aggressive fervor of youth and the desire to bring about ‘actual’ change made me and many like me, his admirers. His influence on the state is unquestionable and one of the reasons why the 23rd of January is a public holiday in West Bengal and many other adjoining states.

The Philosophy of Differences

There was something always rebellious and stirring while reading about Netaji’s life journey. He parted ways with the most iconic of the Independence movement leaders, the Mahatma himself. But the difference in ideology never meant disrespect to the person. It was Netaji, who called Mahatma Gandhi the ‘Father of the Nation’ for the very first time in a radio broadcast from Rangoon. Mahatma himself called Bose, the ‘Patriot of Patriots‘.

Thus, the mutual respect that they held for each other was never relegated to a petty personal defaming discourse. A reality that we often see mouthed out from prime-time news channels these days. Politics prevailed and history bears the brunt of differing ideologies. It also finds the true essence of human intellect and democracy.

For here, it is a nation of more than a hundred crores of people. A nation that must be open to disagreements and differences. A country that must strive for all views to be heard, all ideas to find a way of execution, and all ideologies a place for documentation. Yes, there were differences in the past too, but the Gandhi-Netaji divide was one of the most landmark movements. Because it recognized that it wasn’t necessary to fall in line with principles and practices that one couldn’t agree with. Netaji was a leader who chose to create his path, breaking away from the shadows of the Indian National Congress.

The Philosophy of Non-violence 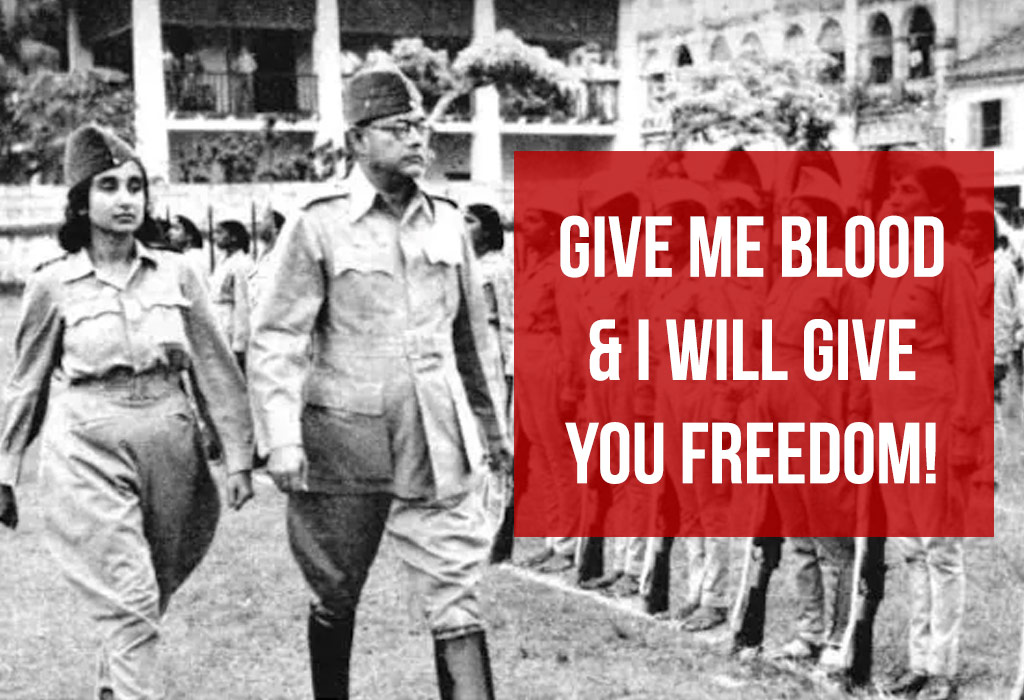 Any discussion on Netaji is quite incomplete without citing his famous quote, ‘Give me blood and I will give you freedom‘. This was in complete contrast to the non-violence approach. With the years of subjugation by the British, who themselves were not averse to using violence as a means of rule, the call for an aggressive outlook seems fair enough.

He formed the INA or Indian National Army, a force to reckon with. The British PM during the Indian Independence Clement Attlee also acknowledged the loyalty of the Indian Navy and Army to the British. It had declined due to the increase in the INA’s or Azad Hind Fauj’s activities.

The Philosophy of Success and Failures

Netaji’s life can be viewed as a classic inspiration of success over failures. Although he cleared the Indian Civil Service examination he didn’t wish to work for an ‘alien government’. He joined the Congress and rose to the rank of the President of the party. He went ahead and founded the All India Forward Bloc within the Congress as a separate faction to strengthen the leftist ideologies. Bose with his charisma and call for total ‘swaraj’.

He believed that for independence India needed a socialist authoritarian view. It was his arrest in 1941 that led to his escape to Germany through Afghanistan. In Germany, he created the Indian Legion of about 4000 soldiers, the Indian prisoners of war who had fought for the British. However, when Germany decided to lay control over the Soviets, Bose felt disappointed because of his leftist views. He also realized that with the German army retreating it had no chance of helping him in getting the British out of India. And so in 1943, he left for Japan.

He revived the INA with strong support from Rash Behari Bose. The INA had its own set of trials and tribulations. However, a momentous moment occurred in Manipur in the town of Moirang when the Indian tricolor (designed after the Indian National Congress) was raised for the first time. The INA fought against the British in many battles, including in Burma. But with the fall of Rangoon and the Japanese surrender, the INA largely surrendered and many INA prisoners were repatriated to India.

The Philosophy of Politics

Bose describes himself as a leftist and a socialist. In his speech, he called for a ‘synthesis between National Socialism and communism. He strongly believed that democracy was the best option for India. Many believe that his alliance with the Axis powers during the World War. It was a practical approach to reaching complete independence for India. Unlike fascist or Nazi he believed that the socialist state would be important for the re-building of the nation. Democracy and fundamental rights on equality, secularism, etc. must prevail.

The Philosophy of Equality

One of the most visionary leaders, Netaji was far above petty classifications of gender, religion, caste, and class. He was deeply influenced by Swami Vivekananda and he gave utmost importance to social service above all.

The INA broke all stereotypes when it formed a separate women’s unit called the Rani of Jhansi Regiment. The regiment was headed by Captain Lakshmi Swaminathan. Bose also felt strongly for the cause of the peasants and laborers. He became a hero for not only India but an inspiration for many Third World countries too. He did put India and its zeal and want for independence on the global map.

In 1945 Netaji is said to have suffered fatal burns that led to his death from a plane crash. Many believe that these were conspiracy theories and that Netaji survived. His death continues to be shrouded in mystery, however, his legacy remains etched in history and memory.

Netaji in many ways symbolizes the warrior hero whose patriotism saw no bound. His strategic and pragmatic planning to overthrow the colonial regime was fraught with a relentless passion for the homeland. At the same time, his liberal ideas and unflinching ardor for acquiring complete independence through secular and unbiased approaches made him a true leader.

Yet, despite his acumen, philosophies, and liberal thinking, Netaji connected with all of us because he was humane. He was not the Mahatma, but an extraordinary human being who captured the imagination of the youth. He stood by his beliefs but did not undermine or insult the different approaches towards the same goal of independence. He instead walked his path and created a legacy that inspired many along the way. And for that Netaji will always live on. 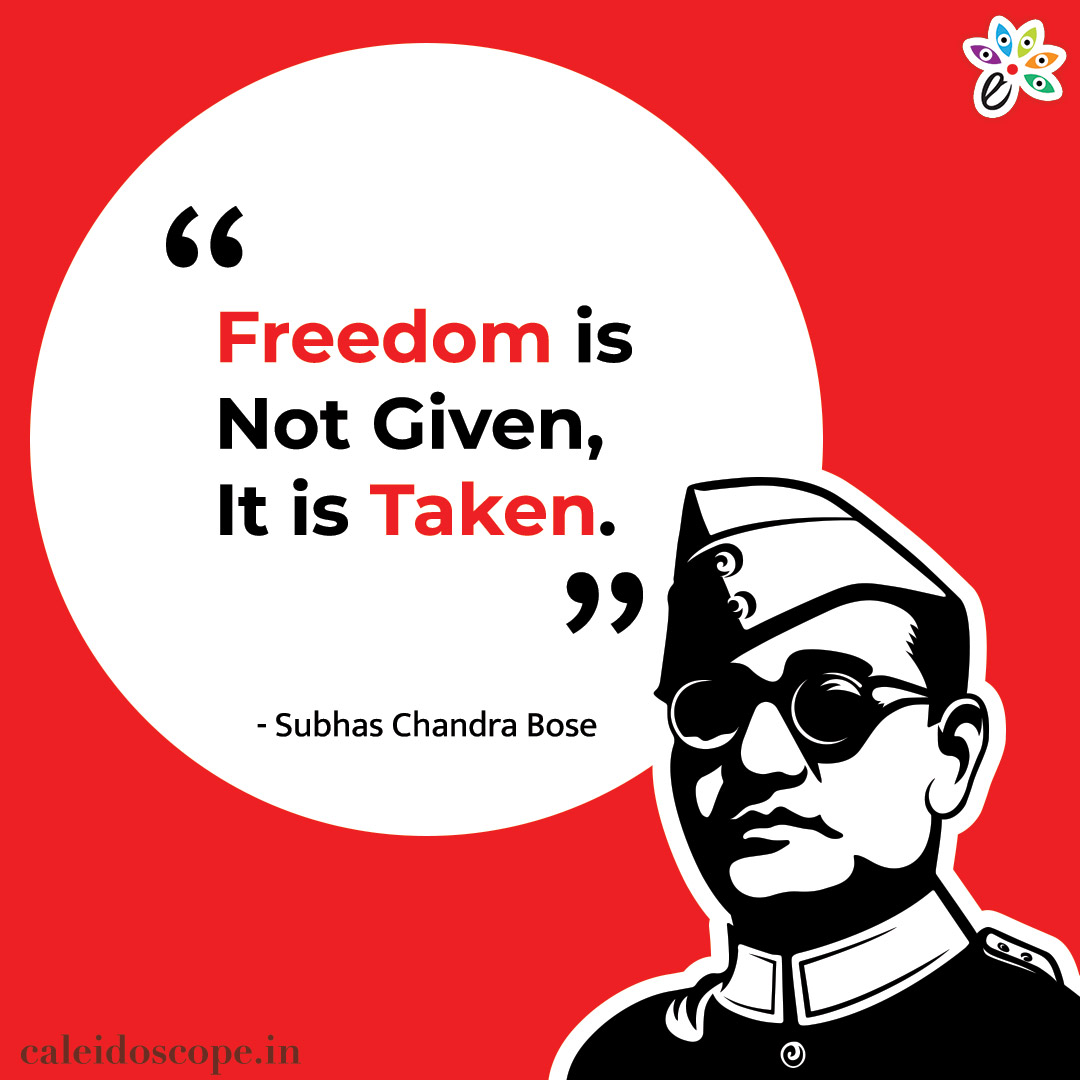 Freedom is Not Given, It is Taken. 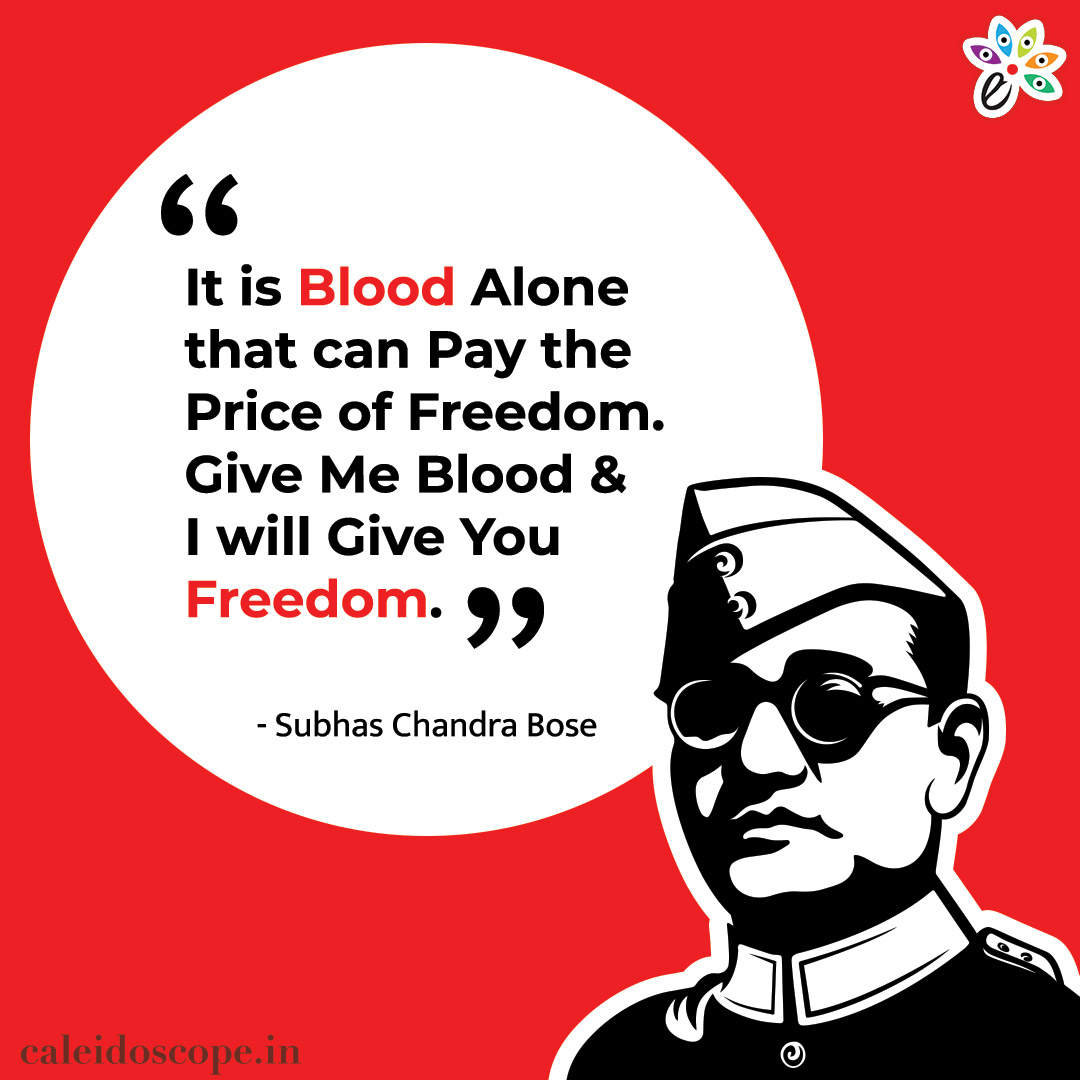 It is Blood Alone that can Pay the Price of Freedom. Give Me Blood & I will Give You Freedom. 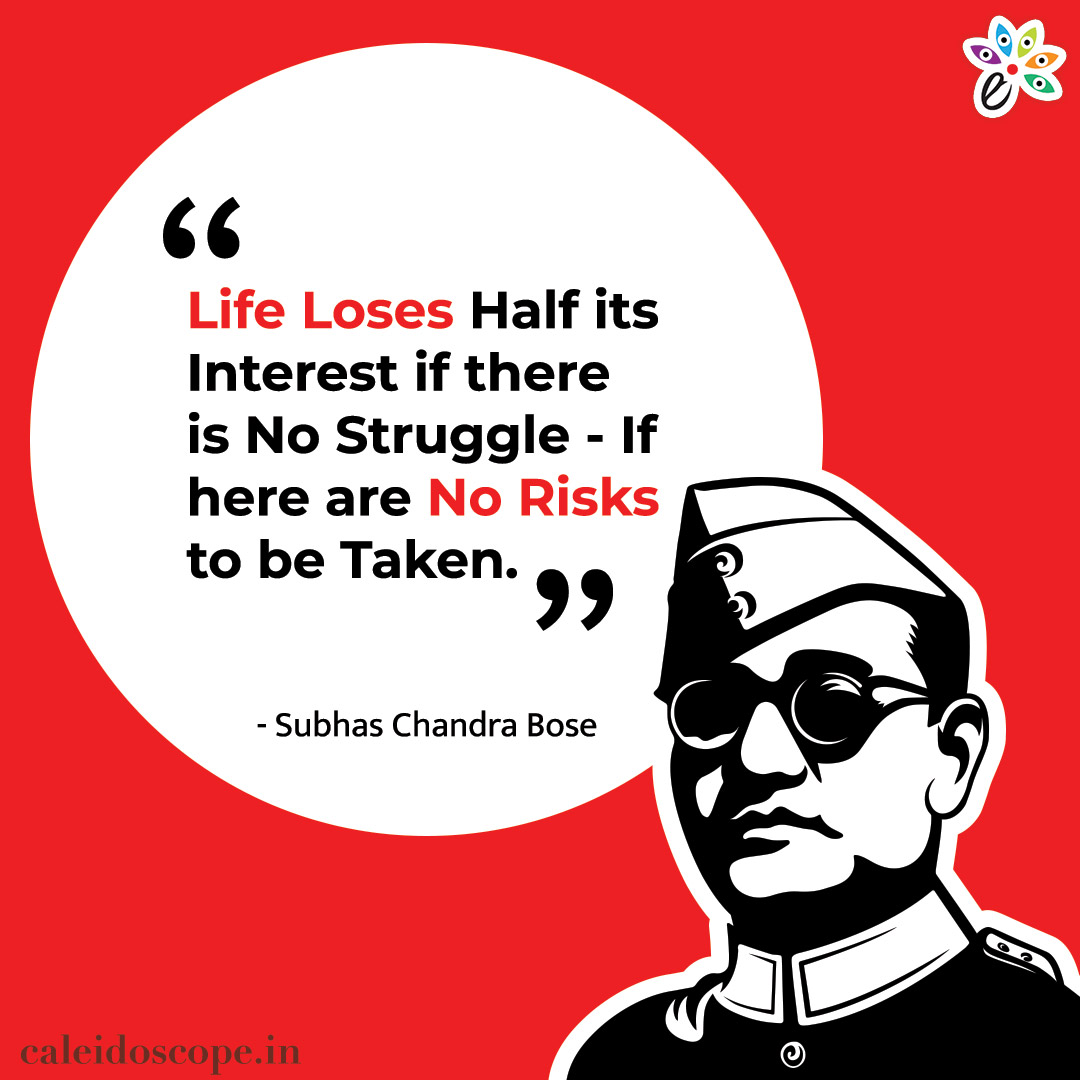 Life Loses Half its Interest if there is No Struggle – If here are No Risks to be Taken. 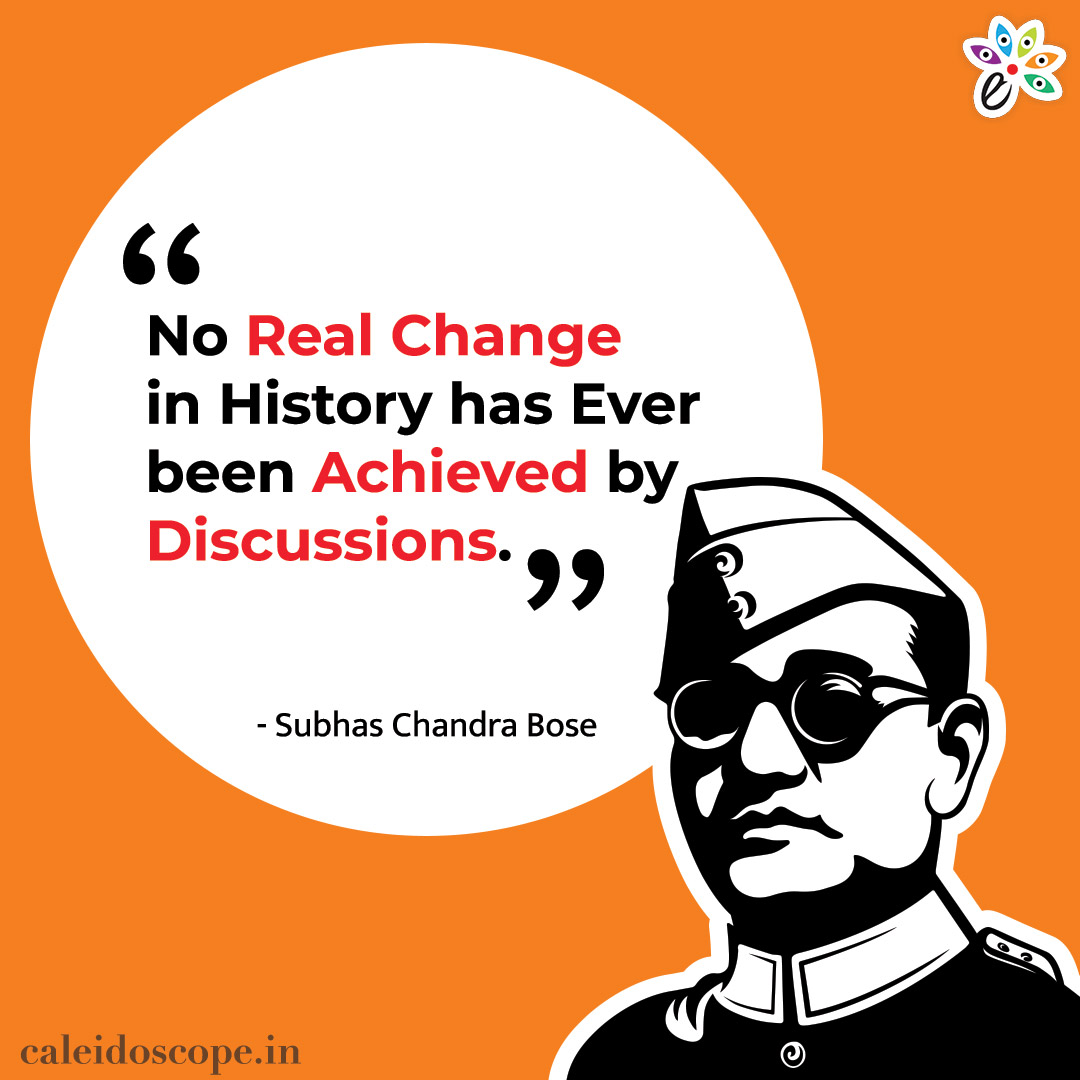 No Real Change in History has Ever been Achieved by Discussions. 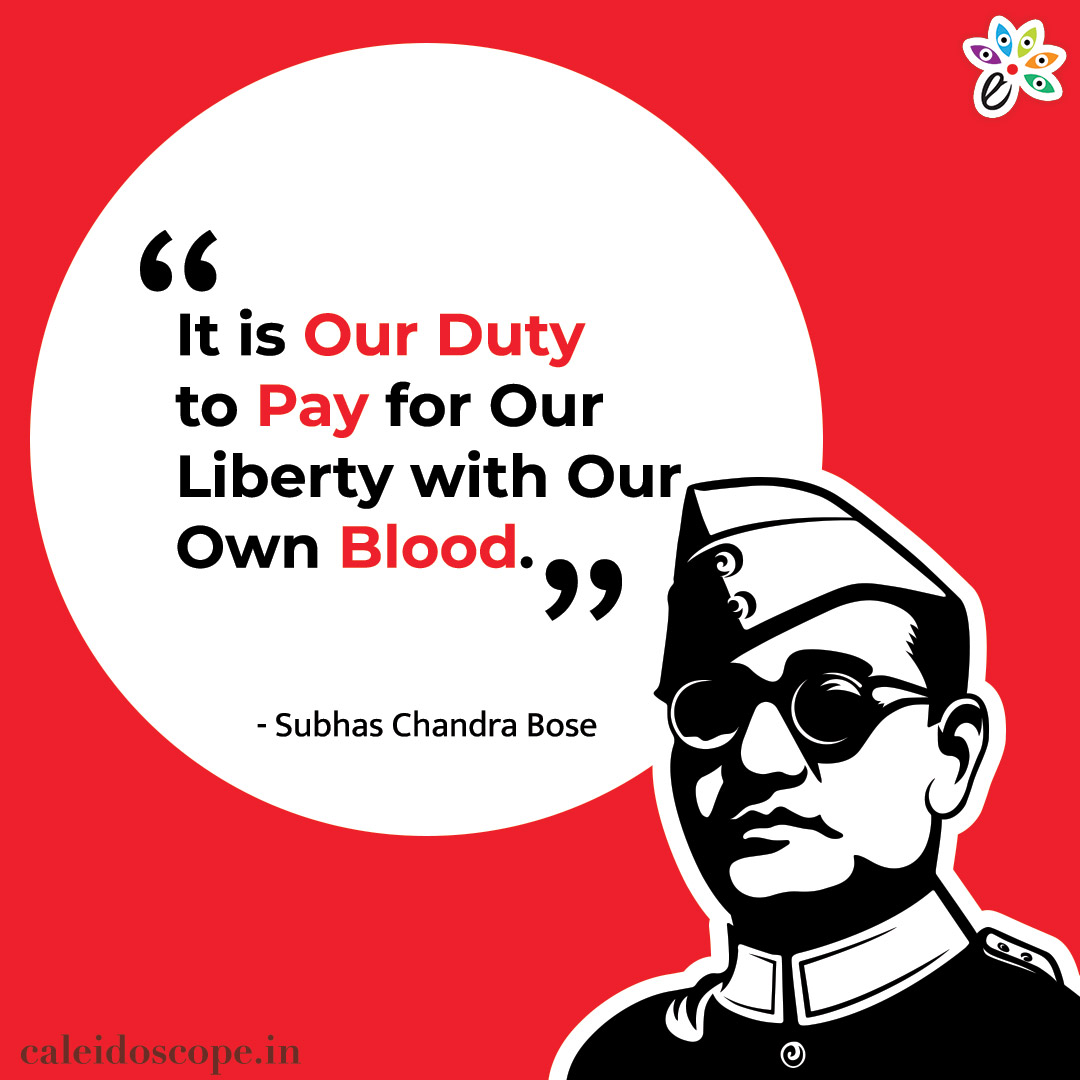 It is Our Duty to Pay for Our Liberty with Our Own Blood. 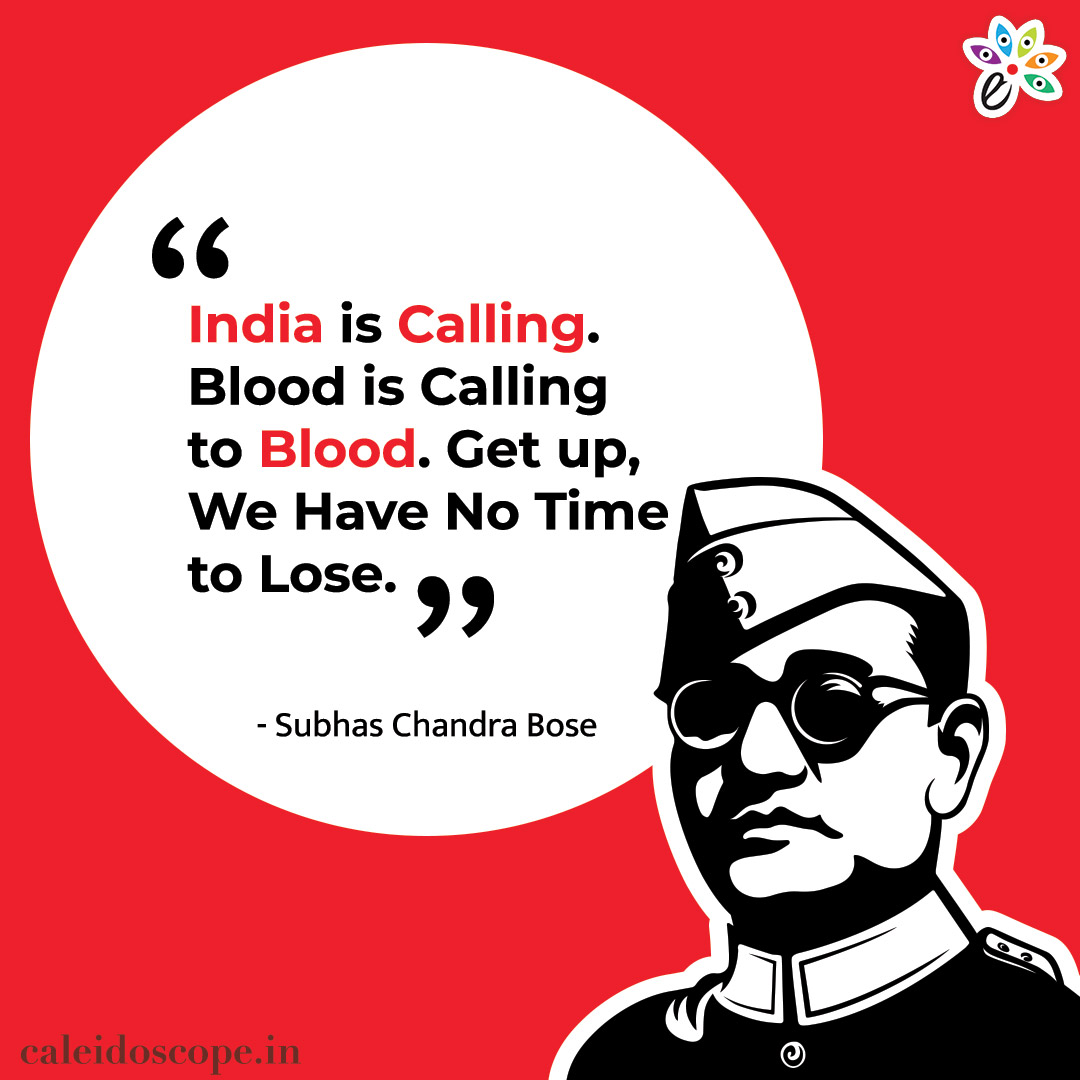 India is Calling. Blood is Calling to Blood. Get up, We Have No Time to Lose. 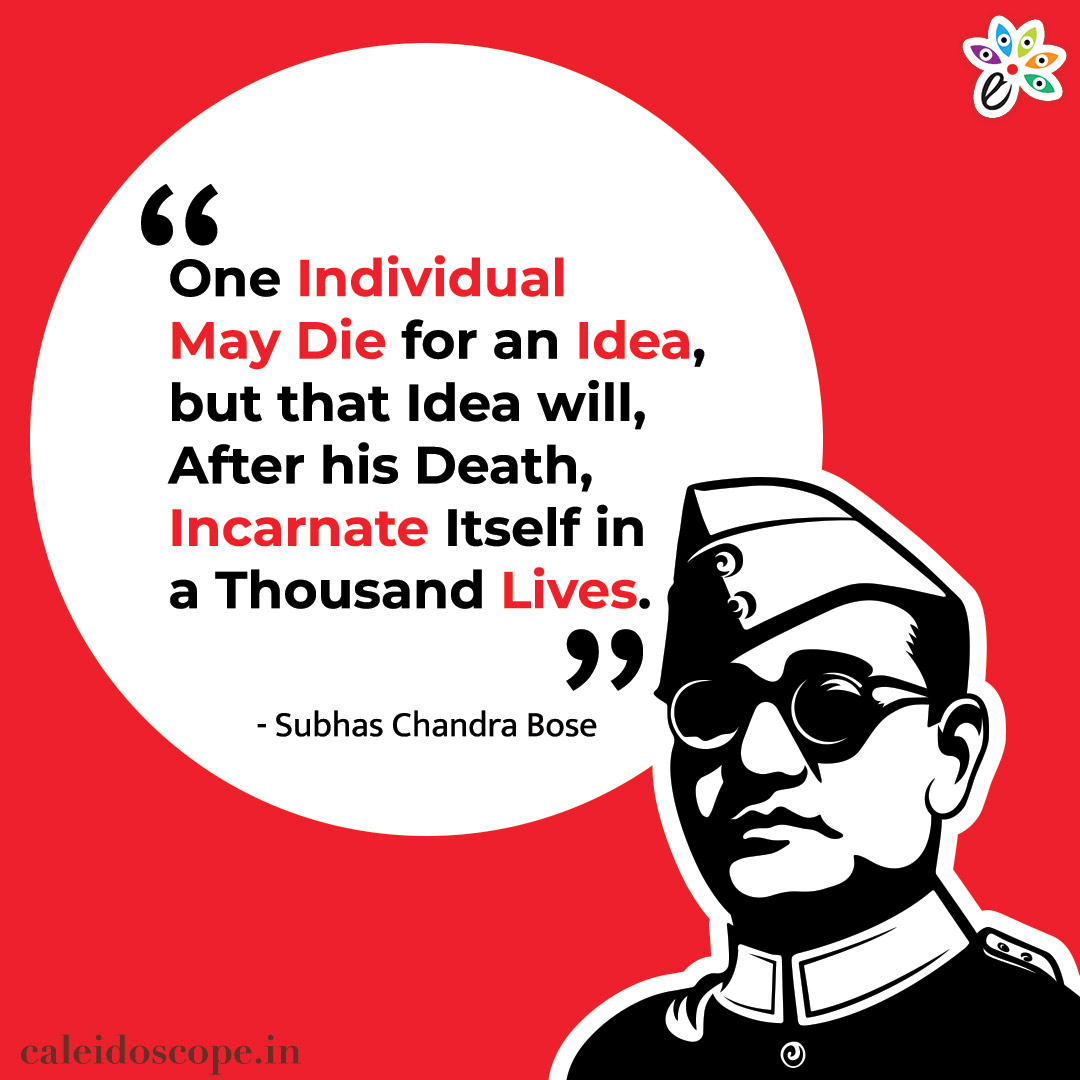 One Individual May Die for an Idea, but that Idea will, After his Death, Incarnate Itself in a Thousand Lives. 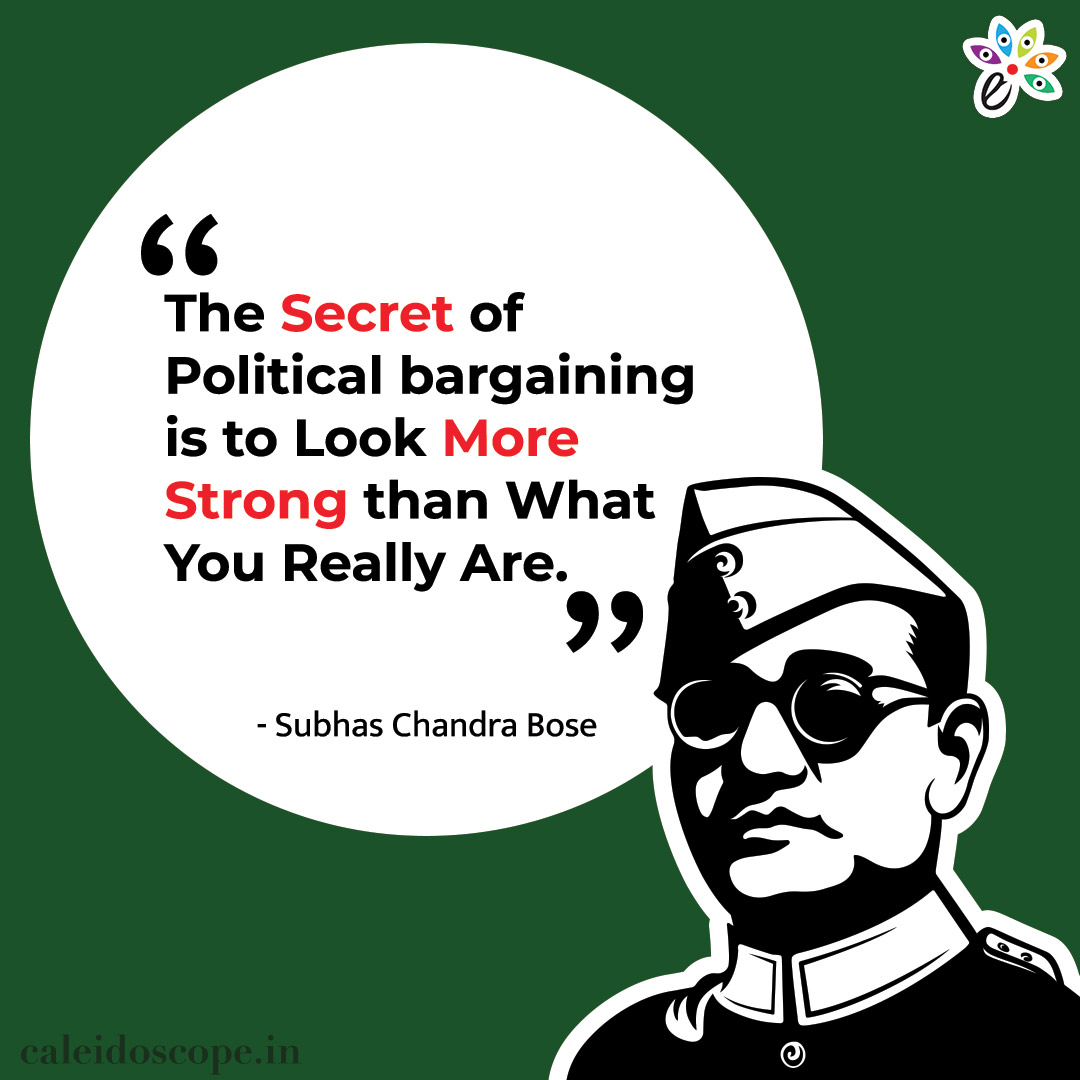 The Secret of Political bargaining is to Look More Strong than What You Really Are.