Looking beyond the rosy picture

It is that time of the year again. Roses and chocolates, cakes and candle night dinners. Valentine’s Day reignites the love in all romantic hearts and brings them together to share their affection publicly! The most prominent symbol for the day of cupids is the bouquet of roses exchanged among loved ones. As usual, lovers of all ages reach out to their nearest florists to customize their bouquets. 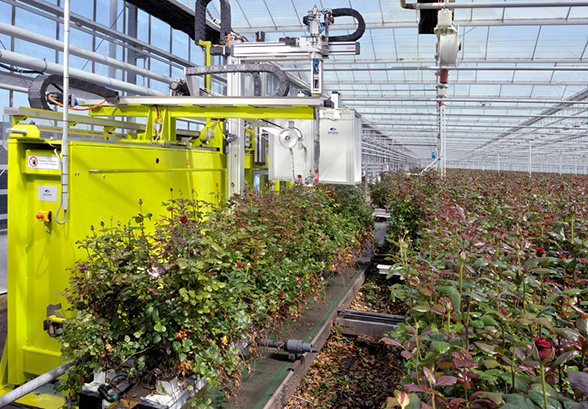 Harvesting robot in a polyhouse

For people like me who are romantically disinclined, Valentine’s Day is a day of crass commercialism instigated by large multinational companies to market their products. It is a day that unites both right-wing fundamentalists and left-wing activists in their hatred towards western cultural vices. I wondered why we Indians who live in the land of Kamasutra and Kalidas, cannot tolerate love. Why can’t we have a ‘Kama Diwas’ dedicated to Lord Kama?

Leaving aside controversial issues, I also wondered how come the roses and other flowers available at the florist, are always cut at the same height, with uniform bud size and are freshly blossoming. I felt these flower buds were so perfect that they looked as if they are manufactured in factories! I could say that since I have tried to grow roses at home, but the outcome was miserable.

Little did I realize that these flowers were actually grown in factories! After visiting the floriculture auction centre inside the agricultural university in Bangalore, I got to know growing roses is a serious business involving crores of rupees. Roses are no more grown in open fields exposed to the elements. They grow in sophisticated large plastic covered greenhouses (polyhouses) which are climate controlled. Numerous workers take care of the flowering plants by feeding manure to enhance growth, spraying chemicals to ward off insects and watering them through mist generating sprayers. 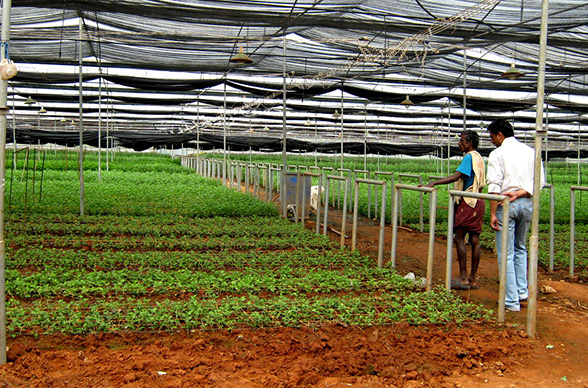 These polyhouses ensure that plants grow uniformly unaffected by the harsh sun, wind and rain. Further, they also have artificial lighting to ensure adequate lighting during dull rainy days. So the roses, the gerberas, the lilies and the chrysanthemums grow under optimum lighting, along with an appropriate supply of airflow, moisture and nutrition.

Large polyhouses can be found around the outskirts of cities like Bangalore and Pune. These polyhouses are operated by large agri-business companies, which have nothing similar to a traditional farmer. They utilise advanced technologies to ensure their flowers meet up to quality standards despite fluctuations in weather conditions. Moving beyond soil-based cultivation, they are now using other substrates such as coco-peat or gravel. Further, instead of using human hands to harvest flowers, the floriculture companies are utilising an automatic cut rose harvesting robot. Don’t worry, the cheap Indian labour is not at threat; these robots are being used in the Netherlands!

Coming to back to roses, they fetch the maximum value during the weeks leading to the Valentine’s Day. So a single long stem cut rose that normally costs Rs.5-10, would fetch Rs.15-20 during the two weeks between February 1st and 14th. Roses of all varieties are exported from Bangalore and Pune to European and Japanese markets during the run-up to the V-day. Bangalore-based Karuturi Global claims to be the world’s largest cut rose producer, exporting about 1.5 million stems of 40 different rose varieties a day to Japan, Australia, South-East Asia, West Asia, Europe and North America. 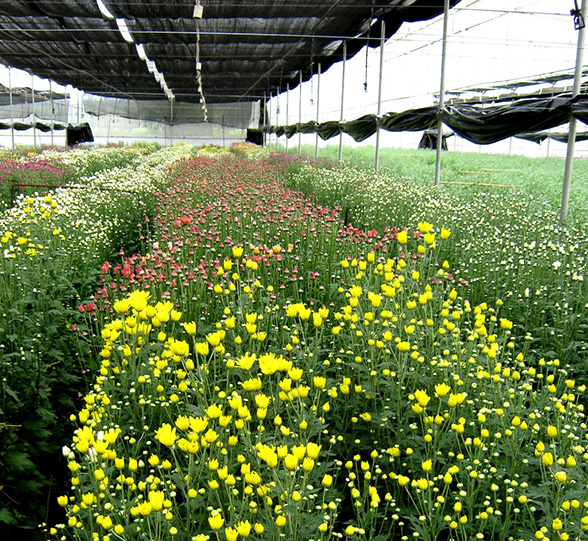 Chrysanthemum blooms in a floriculture unit in Bangalore

Evidently, floriculture has become a serious business requiring massive investments. In the fiscal year 2011-12, 300 Indian export-oriented floriculture companies exported flowers worth Rs.365.32 crore to countries such as the UK, the Netherlands, Germany, Japan and the UAE. Around 190,000 hectares of land was under flower cultivation in FY2011-12, which produced about 10.31 lakh loose flowers and 69.27 million cut flowers.

Meanwhile, floriculture farmers in India are in trouble this year. A warmer winter in 2013 has turned out to be a thorn in the flesh for rose growing farmers. In Pune and Bangalore, the winter temperature has increased by 40 Celsius. This warmth has advanced the arrival of the roses with at least 25 per cent of the blooms are set to arrive in the market much ahead of Valentine’s Day in 2013. Floriculturists are worried that the sharp rise in temperature could lead to damage. In the domestic market, most planters are expecting a glut that would result in prices plunging.

Warm winters can spell trouble for floriculturists, but we buyers can relish the cheaper roses this time!