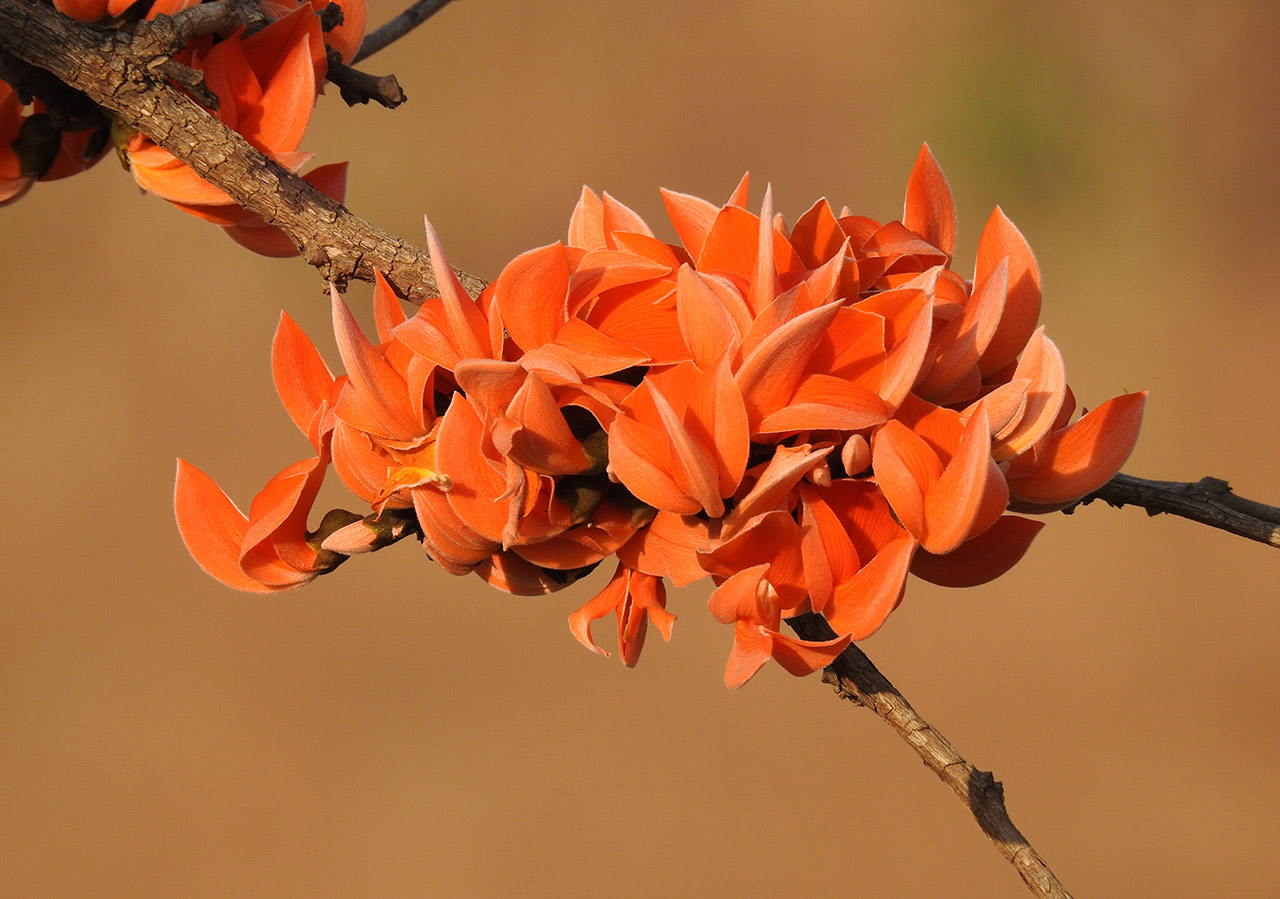 The flowers are on a sojourn; they have illuminated the dry forests with their glittering hues, like the fire flames that illuminate the darkness.

At the winter’s fag end, in the month of February, the teak intensifies shedding its broad leaves and the entire landscape wears a desolate look. But nature has its own equation to keep its beauty intact and the flame of the forest reminds us of this power of protean nature.

No sooner does dryness hit the deciduous forests of Central India, than nature dons a new avatar. In the spring springs the hope, as the flame of the forest begin imparting a majestic appearance to the seemingly desiccated forest landscape.

By introducing the flame of the forest, nature imbues the rufous landscape with freshness and hopefulness. With the flower’s arrival, the landscape rejuvenates, and a poet is made to express his emotions: 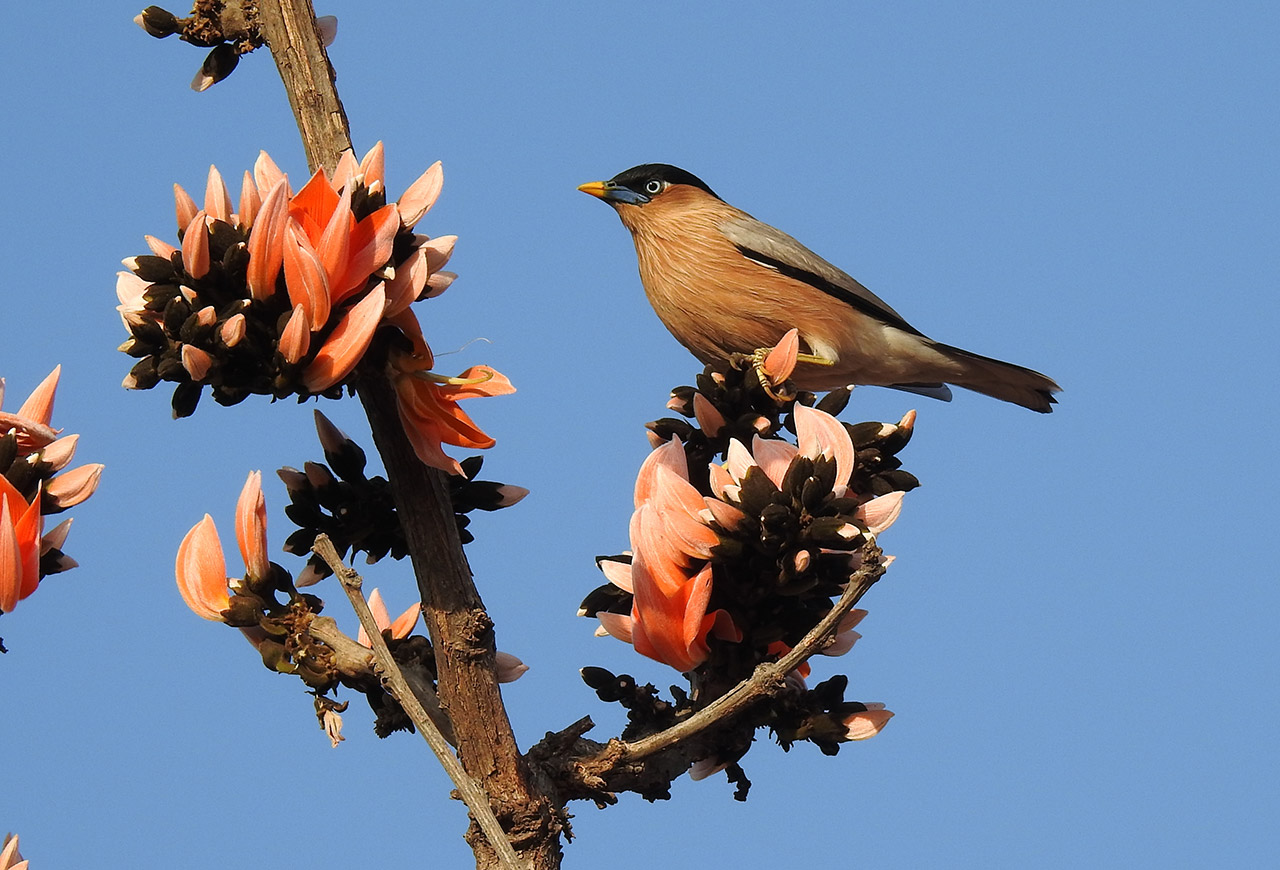 The spring is in her glory,
as she has received her favourite flower.

Wavering by the gentle breeze,
the flames spread the orange hues throughout.

With the flames burning against clear blue skies,
the nature goddess is shining.

Flowering in the dense jungle,
the flame of the forest has brought cheerfulness.

As you take a drive through the jungles of Central India, your eyes are automatically riveted to gleaming flame-orange flowers. Burningly shining in the hot afternoon, they set themselves starkly against the tawny backdrop. Now, otherwise unnoticeable palash (Butea monosperma) trees become distinguishable in the landscape interspersed with mixed-deciduous vegetation.

When seen from a height, the jungle appears all speckled and blotched with orange and vermillion shades. At a time when the teak has denuded, the leaves have parched, and the ground is all covered with thick leaf litter, the flame of the forest adorns the jungle.

Coinciding with the season of the Holi festival, the flame of the forest is also called the Holi flower. The fame of the flower being traditionally used to make Holi colours is quite widespread across the country. With the blooming flowers, the mercury rises slowly towards 40 degrees Celsius.

The flower’s unique appearance amazes one. In the middle is one cone-shaped petal that rises, assuming pointed end. Two curved petals emerge from dark black velvety sepal on either side of the pointed petal. The orange flowers and black sepal bring to the fore, literally, the painter in nature. The juxtapositioned individuals form bunches that appear like fire flames in the mildly hot spring afternoons.

The respite the flowers offer to avian species during the transition to summer justifies the old adages: “nature remains in her beauty throughout the year” and “she knows how to regulate the cycles.” 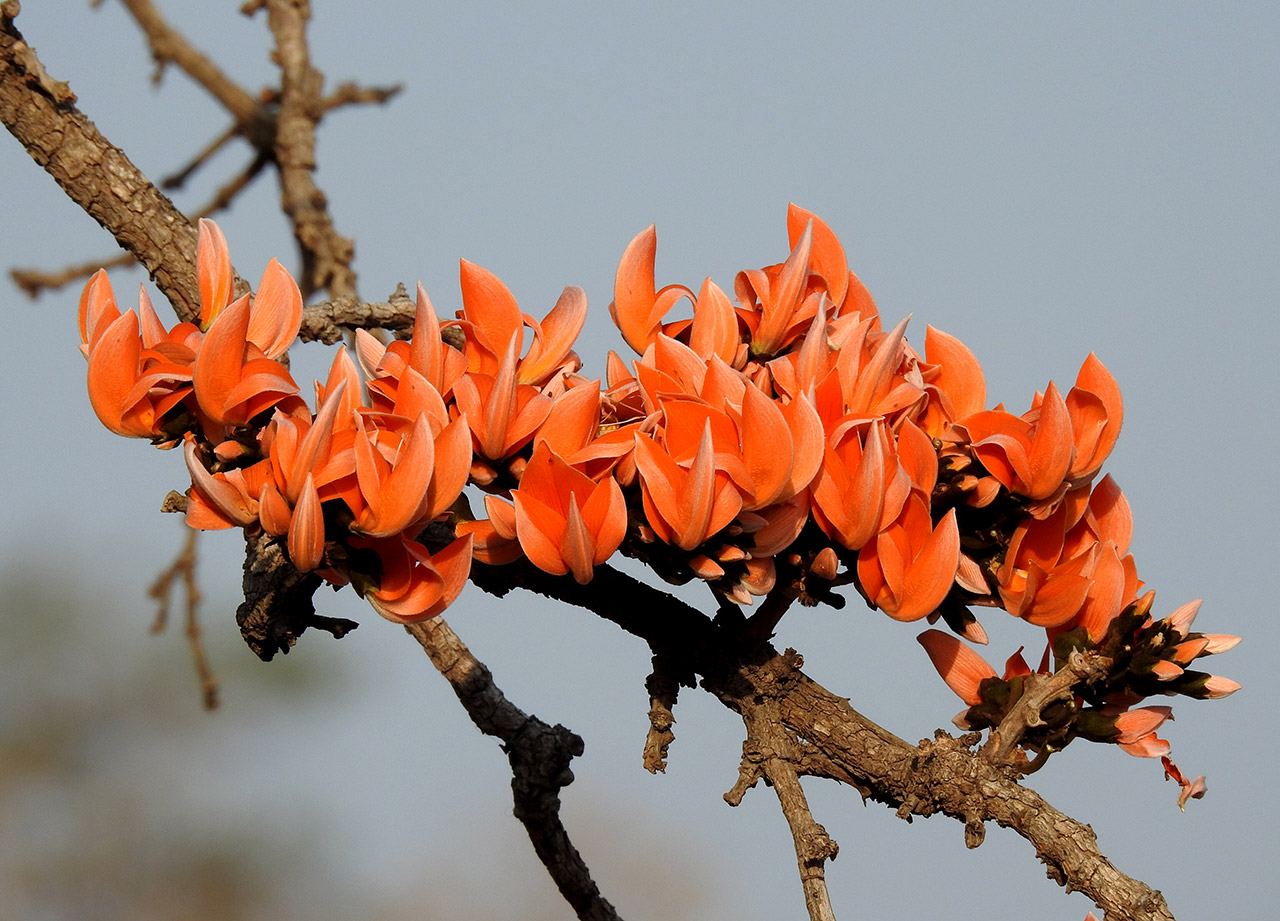 As drying vegetation leaves birds and bees scrambling for food, the flame of the forest invites them to have a feast. Right from an apparent plum-headed parakeet to the tiniest red ant, wildlife is all enthused. The chestnut-shouldered petronia and the bramhiny starling cleverly camouflage themselves amidst the flowers, as they suck the nectar. The purple sunbird mounts itself on top of bunches and flutters, in between, amidst the shining shades.

When nature has all her energies dissipated, the flame of the forest arrives to revitalize her and maintain the equilibrium.

But then, the floral guest has to bear the brunt of climate change– erratic rains and fluctuating temperatures. Also, fast-expanding human settlements pose potent dangers to the landscape that hosts the lovely flower.

The sustainable existence of the soft floral species – a nature’s angel – however, is capable of offering powerful impetus to decimate the negative impacts of climate change and human actions. With intensified conservation, we can have the flames burning.

Remaining unflickered throughout their stay, the flames keep satiating nature’s needs, before finally getting extinguished by themselves. Finally, the flame of the forest wilts and falls to the ground. The sojourn ends!