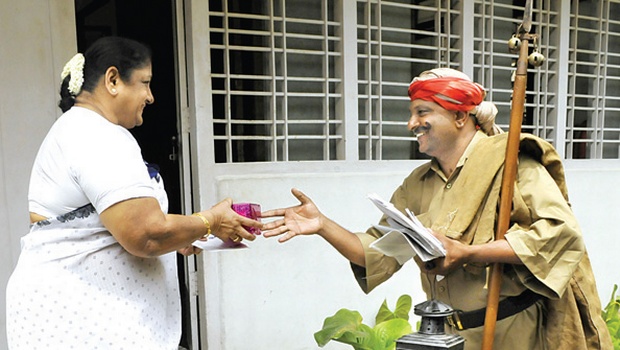 I sat on the verandah huffing a cheroot. The tinkling of a bicycle bell put a smile on my face. A bulky man in his mid-twenties, sweating profusely through his India Post uniform, handed a letter to me. His sparsely filled bag reminded me of the day when I used to transport my bulging bag of inland letter cards, envelopes, pension money and other miscellaneous correspondence.

I, Selva Raj, after 35 years of service, finally retired in the district of Thirunelveli. My career was glorious in its own way. It was in the small hamlet of Odaikkarai that I began and retired from my beloved career. I was bilingual. Tamil was my mother tongue, and I was fluent in English too. My knowledge of English came in handy as I was the scribe and reader for the folks in my village.  In essence, I was the gossip bearer. Often I would take breaks in the verandahs of the houses. Steaming coffee or cold buttermilk used to be offered. The happenings of the village would be passed around.

Back then, communication was synonymous with the postal services. Every single type of postal stationery communicated a message in itself. A telegram was often associated with bad news. To convey a short, crisp message, a postcard was sent. An envelope with a fancy stamp conveyed opulence. For regular correspondence, the inland letter card was popular.

The tinkling of my cycle bell was a tell-tale sign of my arrival. Eager heads would pop out of the doors in anticipation of news. The year was 1989. Major Prakash was in the Indian Peace Keeping Force. His young wife, pregnant with their child, would sit by the window around noon every day. More often than not, I saw the emotions of relief and anxiety war on her face. No news was probably good news yet it did not dissipate her fear. One rainy afternoon, I carried the ill-fated telegram that left her a widow. I had to experience the excruciating pain of reading it to her and watching her crumble right in front of me.

Like all jobs with its ups and downs, I was the proud deliverer to the joyous news too. Young men, who had completed their degrees and waiting for employment, would buy me an extra biscuit to ensure that I came first to them as soon as I received an envelope from Madras or other cities.

I did love my job. In fact, I have my profession to thank for my marriage. My nephew loved to collect stamps. As I delivered the letters, I would request the recipients to hand over the stamps as soon as they had opened the envelopes. One such time, a letter from the United States of America had arrived. Mary’s father, my future father-in-law, had received a letter from his brother. Mary came outside to collect it with a cup of tea in her hand. A few minutes of conversation sparked the beginning of our friendship.

After marriage, I was posted in Gobichettipalayam. My wife couldn’t accompany me, but we corresponded on a weekly basis. She used to effuse about the activities of our little boy and the village gossip. I still possess every letter.

The postman handed over the letter to me. Before he rushed off, I stopped him and invited him in for a tumbler of buttermilk. He looked at me rather strangely. With a sigh, I indicated that he take a seat. I told him that I was a retired postman who wished to pen down his memoirs and write about the contemporary scenario too. He shrugged carelessly. His parents pushed him into taking a government job. Since he had four sisters waiting in line for their marriages, his education had not been given priority. The job was not something he liked to do. It was a routine, meaningless job of cycling in the sun with a nearly empty bag. Someday, he hopes to write the Tamil Nadu Public Service Commission Examination and shed his India Post uniform.

Other than delivering money orders, speed posts or passports, the postman has been rendered redundant. As the postman fades away into oblivion, he is accompanied by the art of writing and the hobby of philately.

My grandson was sitting beside me clicking away to glory on his ‘laptop’. Yes, that was said with a sneer in my face. Since the technological advancement to computers, laptops, cell phones and God forbid its existence- internet, e-mails have become the norm. The mid-90s saw the boom of the internet and e-mails. By the new millennium, the computer and the cell phone had become novelties in my village and I had shed my postal robes. The timing was rather apt as I couldn’t have borne to witness my healthy mail bag reduce to a size zero.

As if the cell phone wasn’t enough, the smartphone came into the picture with various applications. You want to contact somebody, open Whatsapp or Gmail. And the appalling texting language makes me cringe. Ironically, the telegram faded away and morphed into the application Telegram.

There is something so endearing and personal about writing a letter. It makes you want to say some much more. The pen is indeed mightier than the keyboard. The anticipation of receiving a reply after a significant amount of time is a beautiful feeling.

My wife was away to take care of her ailing sister in the neighbouring village. Even after so many years, my wife and I exchange love letters. They are not filled with flattery or ridiculous declarations of undying affection. They are treasures on paper filled with a silent message of love. With a reminiscent smile, I opened the inland letter card. “My Dear Husband, …….”