Delhi is an historic city. From ancient to medieval and modern, it serves as both the origination and the conclusion of many diverse storylines in Indian history. It is also a busy place, where its dwellers practice the art of fast city life. In all this hurriedness, traces of those old storylines are passed by, unacknowledged. In respect of that, we have created this infographic to help you find places to go the next time you take a break from city life. Here are the Ten Offbeat Destinations in Delhi that you should definitely visit. 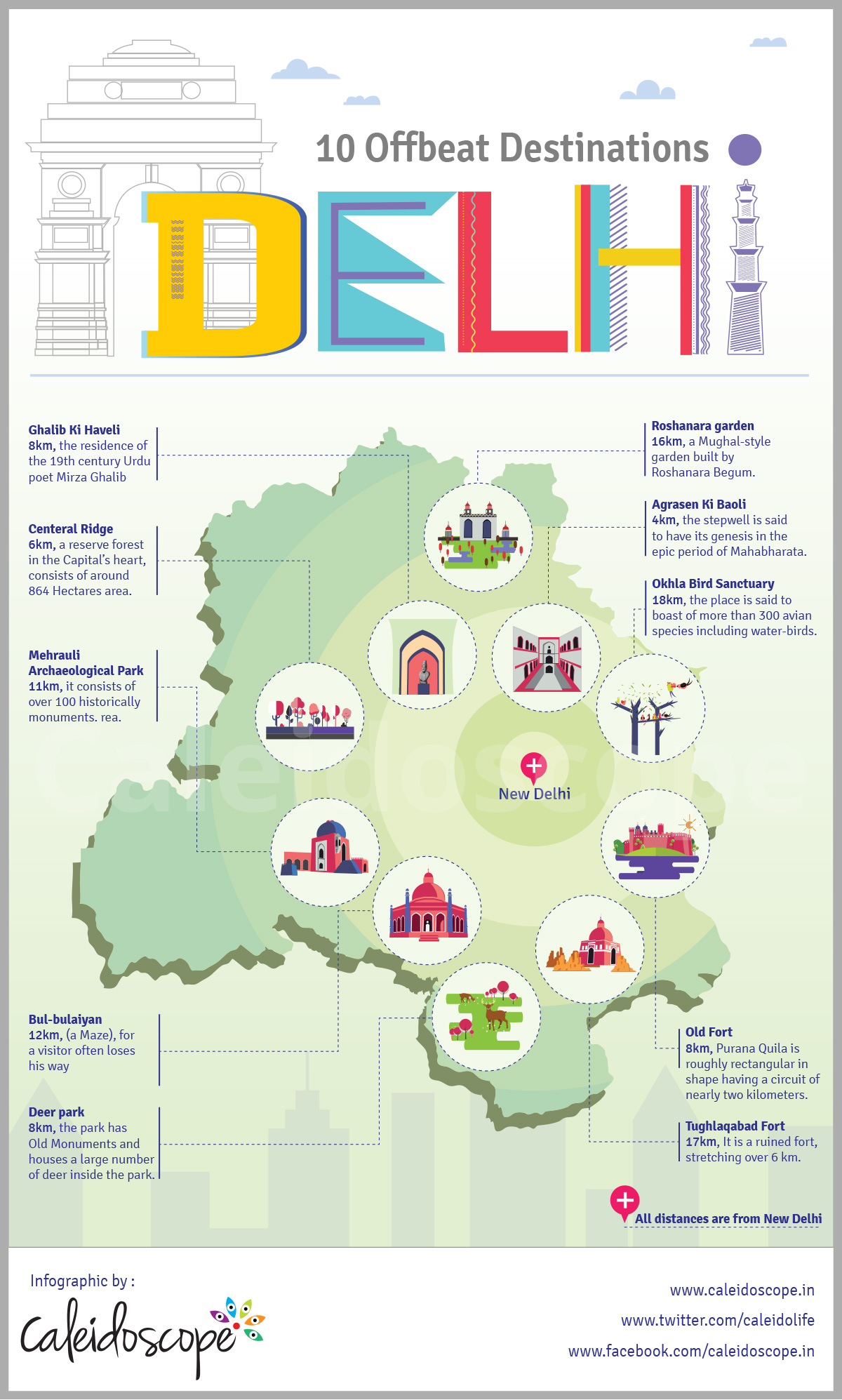 Now a heritage site, this haveli was once the residence of Mirza Ghalib, the celebrated Urdu poet. He spent last years of his life in the building until his death in 1869. The building provides a peek into the Mughal architecture and noblemen lifestyle of the time.

The ridge is a part of the Cenozoic era Aravalli Range. The hills are covered densely with a variety of wild trees and are home to hundreds of bird species. There is also the Biodiversity Park set up by Delhi Development Authority (DDA), which serves two purposes, of making people aware of Delhi’s natural heritage, and of preserving its ecological balance.

Located near the Qutub complex, this peaceful site offers a mix of archaeological and natural beauty. The site houses more than 400 monuments, with dates ranging from the Sultanate period to the Mughal era.

Officially known as Adam Khan’s Tomb, this 16th century monument earns its common name because visitors can easily get lost. Although there isn’t any actual maze, its pseudo-mysterious character can be attributed to the confusing passages, and the thick woods located just behind the complex.

The garden was commissioned by the Mughal princess, Roshanara Begum. The well-maintained lawns cover a wide area and are speckled with remnants of its heyday, like the canal, the gateway, and the tomb.

A protected monument under the Archaeological Survey of India (ASI), this less-known seasoned stepwell is believed to be from the 14th century. Although much of it has seen restoration, a mysterious historical feeling is not lost.

The sanctuary is actually located just outside Delhi (in Noida) and is home to more than a 130 migratory and resident bird species. In addition to this, animals like the native Nilgai, Indian Mongoose, and the Black-Naped Hare can be spotted.

The fort was commissioned by Sher Shah Suri, the Afghan ruler. The walls of the fort run for almost 2 kilometres. Interestingly, the structure was on the bank of Yamuna, before it changed its course.

Located in South Delhi, this part is a beautiful place for morning runs. It has rabbit and deer enclosures, an artificial lake, and is home to many native plant and bird species.

This fort, onne of the biggest remnants of the Delhi Sultanate, was built in the 14th Century. Much of the original fortification walls still stand, giving an essence of the original.