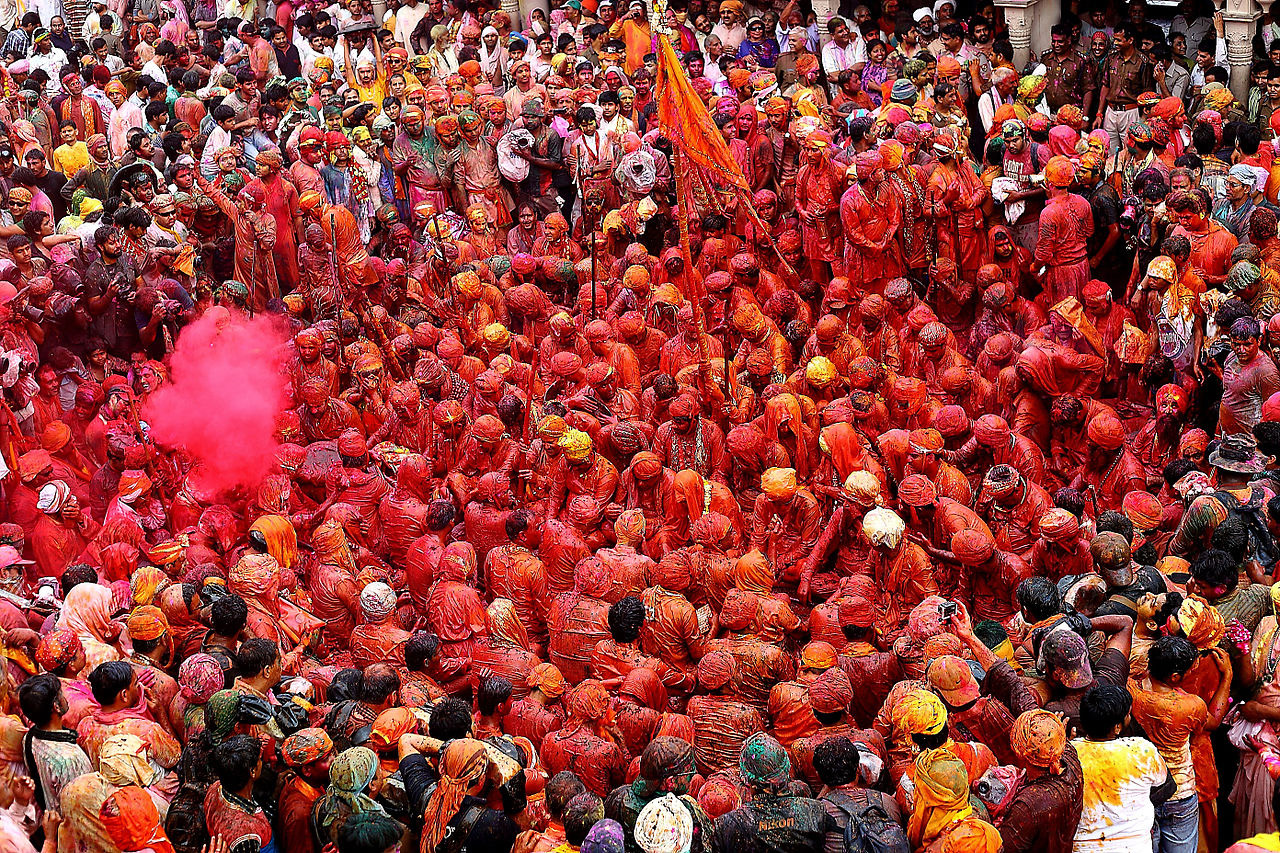 Holi is the most exuberant and colourful festival of India that symbolises the arrival of spring. It is truly a festival of joy, fun and frolic where people of all ages lose their inhibitions to play with colour. Naturally, showering colour was the best way to express the arrival of spring! However, the modern day Holi festival has become a hazardous play of chemicals with the increasing use of synthetic dyes.

While the entire country celebrates this joyous festival with colour and water, there is a place in Uttar Pradesh that celebrates with batons or lathis! Barsana, situated at a distance of 50 km North West of Mathura, is a small town in the district of Mathura in. “Lathmaar Holi” is something that makes Barsana a must-visit destination. During this festival, the men from Nandgaon reach Barsana to tease and play holy with the women of Barsana. As a part of the celebration, the women beat them with wooden sticks to protect themselves.

The town’s culture is replete with numerous legends of Krishna and the Gopikas and poetic depiction of the legends are very popular. Apart from Holi in Barsana, Radha Ashtami is also celebrated with grace and devotion, which is the day marking the birth of Radharani. However, despite being a great place to visit, mainstream tour operators have sidelined this tourist spot, considering it as offbeat destination.

Man Mandir, the main temple of Barsana is located on top of a hill, which part of the four hills that surround the town. These hills are regarded as the four heads of Lord Brahma, who according to Hindu Mythology, reincarnated himself in a hill to make space for Lord Krishna to live on earth. According to the Hindu Legends, Barsana was the capital of King Vrishabhanu during the Dwapara Yuga. He was the father of Radharani, who was the consort of Lord Krishna.

Being closely located with Mathura (50 km), Barsana shares the same past background and culture of Brajbhoomi. As Barsana is a tiny town, it was under the rule of Mathura. Barsana has been under the rule of various emperors such as Vrishabhanu, Akbar, Jahangir, Shah Jahan, Aurangzeb, etc. Raslila is the popular dance form of Barsana associated with the romance between Lord Sri Krishna and Radha Rani. The town is also popular for Charkula dance form and forms associated with Mathura city.

SourceThis small town is very much involved in creative activities. During festivals like Holi and Radhashtami, the flea markets are full of colourful handicrafts and artefacts. One could buy them as souvenirs. The brassware of Barsana such as hanging lamps, Shiv Trishul, and Sindhoor Pots are among the most-sought after items. Apart from this, the fine finish and unique designs of Barsana’s embroidered clothes are also high on the tourist must-buy list. Semi-precious and precious stones are also used to adorn the embroidery on fabrics.

While you visit Barsana, do not miss to savour some of the sumptuous delicacies. Chole Bhature and Gujiyaas are simply not to be missed. Drinks such as Thandai and Bhang could also be tried. Thus, to enjoy the best of the deals, one must visit Barsana during the festival of Holi held in mid March every year. However, you should be cautious while drinking Bhang as one could feel dizzy.
Despite being a small town, there are many hotels, guesthouses, dharmashalas in Barsana that meet the accommodation requirements of travellers. The hotels in Barsana have all the modern facilities, exceptional service and excellent Indian hospitality.

Barsana is accessible to travellers visiting via air or land. The town is in proximity to various big cities such as Delhi (132 km), Mathura (39 km), Agra (94 km), and Vrindavan (37 km). Mathura (50 km) is the nearest railway station where all the super-fast trains halt. Visitors could also reach Barsana via buses as well. There are well-connected roads from Delhi, Mathura and Agra. For commuting, UPSRTC buses, metered taxis, auto rickshaws, jeeps and cabs are available. In case, you are driving your personal car, you could reach Barsana through MDR143W and MDR 94W from Mathura.

Author: Written By Neelam Talreja
Neelam Talreja is a Travel Writer with a keen interest in writing about incredible destinations. Her write-ups are detailed and comprising of all relevant details that could accommodate. All write-ups are written after thorough research with a blend of creative writing that will make you travel along.

Caravan travel in India is gaining popularity among young travellers these days. Here are 4 Caravan travelers from India that are regularly empowering Caravan tourism through their trips:
Read more
Art & Culture

The Kite Festivals of India are celebrations of vibrant colors that fill up the skies and bring about smiles on everyone's faces!
Read more
Offbeat Travel

Trip to Coorg - A beautiful destination in Karnataka, Coorg, serves as a fascination to many travellers who seek a sense of thrill mixed with scenic beauty.
Read more
Offbeat Travel

Tips Before You Rent A Motorbike In Goa

If you have decided to rent a motorbike in Goa, here are a few tips to ensure your safety and to make the experience more enjoyable:
Read more
Art & Culture

Vishwarang 2020 - Children of the age group 4-12 years can come forward and register for the fun and frolic sessions free of cost! An itinerary of events that will take place is as follows:
Read more
Offbeat Travel

There are numerous adventure places in India operating different kinds of thrill sports for daredevils. Here, in this article, I am introducing you to the 10 most popular among all.
Read more
Nostalgiphilia

A postman, delivering all kinds of messages, had found a significant place in the lives of people back then. But with time, he too faded into oblivion.
Read more
Offbeat Travel

Women On Clouds – A Backpack Full Of Female Friendships, Laughter And Stories

In conversation with Shireen Mehra, the brains behind Women on Clouds, an entrepreneurial venture for an all-women travel company that is empowering women travellers.
Read more
Offbeat Travel

How Hampta Pass Trek Refilled the Happiness in Me Post Lockdown

My trek to Hampta Pass was full of mixed emotions, but throughout the journey, this was one of the moments that I felt happiest. While trekking it was obvious that we would find nature’s awe-inspiring imagery, self-reflecting one.
Read more