Traveling by train has been always a pleasure, where we can leisurely spend time relishing the changing landscape disconnected from all our work. If you are an offbeat traveller, you will have all the more pleasure enjoying the nature’s beauty. One of the most glorious journeys through Western Ghats which I have ever travelled was the train journey from Mangalore to Bangalore, which was an unforgettable experience.

I had always heard a lot about this train route (called the ‘Green Route’ by trekkers) from my better half and other friends, who cherished memories of trekking there, in there college days. I had travelled earlier on this route, but those bus journeys on treacherous roads were horrifying. So it was little hard to visualise this romantic image as they had explained. 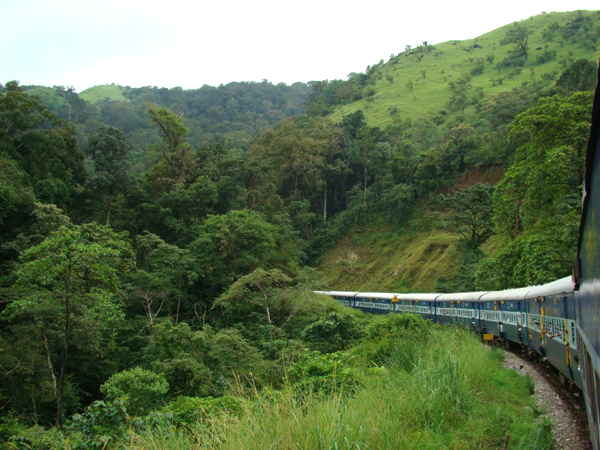 Finally, the day came when we got a chance to go to Mangalore for a relative’s wedding. As usual I had to book our tickets keeping my husband’s tight schedule in mind. The journey from Bangalore was in the night so we could not see the route. But while returning back, we ensured to travel during the day so that we did not miss experiencing a journey we have waited so long. Rather than the wedding, I was all the more excited about the travel from Mangalore to Bangalore.

When we entered the compartment, there were just four people to accompany us. In the seat opposite to us, a grandma sat with her daughter and a new born baby. Beside us at the side window seat was a heavily built businessman who was very busy with his business calls over phone.
When the train started, it all felt the same, but as the train gathered speed, I was able to feel the warmth of nature in my eyes. I had ensured to book a window seat keeping the picturesque journey in mind, but my calculations went wrong! Being a regular traveller, the businessman told us that we are sitting on the wrong side, since the scenes would be visible from his window. It was obvious that I had to plead with him to let me take his seat and he politely obliged. 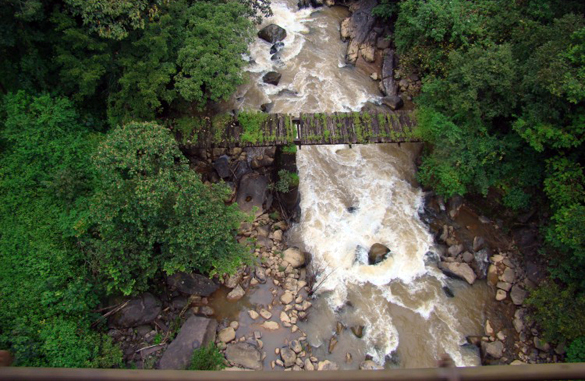 Till the train reached Subrahmanya Road station, I was wondering why people exaggerate things so much. The route had the usual scenery of rice fields, arecanut plantations, shrubby forests and tiny villages. But once we crossed the station, there was lot of hustle-bustle happening; passengers began moving towards the doors in their compartments to catch the panoramic view. My husband, who was patiently sitting in his seat, took out his camera and rushed to the door with a broad smile…

All the doors and windows of the train were packed with passengers who were relishing the marvellous sight of the green ghats… Even I was struck by the beauty of the green valley. However, it was not all the same with my fellow travellers. The grandma who sat opposite me was busy cuddling her grand daughter not much bothered by the scenery. For her the beauty was in her granddaughter’s smile! The businessman he had moved to our seats was now enjoying sound sleep and was snoring away to glory…

The excitement of the journey started from Subrahmanya and continued till Sakleshpur. The time spent between these two stations promises an unforgettable experience of Western Ghats. Marvellous views of the tropical evergreen Shola forests that blended with the verdant valleys, gentle waterfalls nestled in the folds of the hills, gushing streams, breath-taking bridges and endless tunnels. Yedakumari is the midpoint station that comes between Subrahmanya and Sakleshpur. Picturesque beauty of the steep gradients from Yedakumari displays nature at its best.

Trekkers from all over are fascinated by this destination and throng the place just after monsoon. Yedakumeri railway station is only place to stay overnight for trekkers. The stretch between Mangalore and Bangalore consists of both ghats and plains sections. The stretch between Subrahmanya and Sakleshpur is a ghats section of 55 km with 110 curves, 57 tunnels, 15 gradients, and 67 bridges with fascinating views. 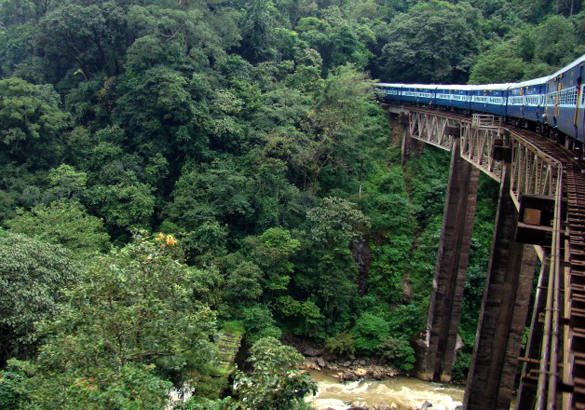 The train journey between from Mangalore and Bangalore, via Sakleshpur and Hassan, was built in 1979 with the commissioning of the metre gauge track for traffic. But after almost one-and-a-half decade, traffic on this route was stopped in 1996 for the gauge conversion work. After an enormous delay due to neglect by the state government and the railways, the work on broad gauge conversion was completed, and movement of goods trains began as trial run in January 2006. The route was formally commissioned for the movement of passenger traffic in December 2007.

The train we traveled had 12 coaches pushed by three engines. While we are busy watching those beautiful curves, we did not realise that there were two engines at the back of the train and one in the front, which were puffing with all their energy to push the train up the steep gradient through the valley. I thought I was the only one so excited to enjoy the thrill of the picturesque journey. However, when the train went through the tunnels there went a huge roar of the travellers in other compartments. It was hard to explain why they were shouting! But this magical journey made all of us so excited.

The scenery changed dramatically as we reached Sakleshpur, and the normal routine journey ensued with tiny villages and farms floating by. Till we reached Bangalore we were relishing the beauty of the journey in the pictures captured in our camera. Long after we ended our journey, I still cherish those memories and they will remain a part of me forever…