Continued from – The Reel Storeys – Architecture in Indian Movies

Indian movies are known for their lavishly sprawling sets, extravagant set designs, mind boggling special effects, elongated narration and song sequences. These musicals depict a wide range of emotions right from slapstick comedy to uncontrolled fury, ensuring a wholesome entertainment for the entire Indian household. A typical Bollywood movie is shot in three types of locations in general: breathtaking landscapes for outdoor scenes, elaborate indoor sets and heritage monuments. Particularly, period films are shot in heritage monuments that provide an authentic background for establishing the historic aspect of the story. Here are some of the well known movies that were worth mentioning for their architectural set design in Indian cinema. 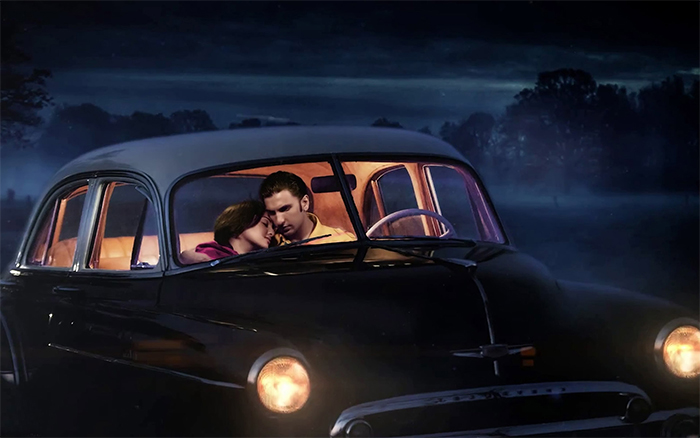 Lootera was a great period film. The costumes, songs, and locations transported the viewer back in time. The Jain temples of Deulghata of Purulia district in West Bengal form the backdrop of an excavation scene featured in the film. Deulghata in Bengali means “the land of temples”. Succumbing to deterioration, these Jain heritage sites are masterpieces in brickwork. . Owing to natural calamities and human neglect, only two out of the three temples are still standing. These temples have been extensively repaired, with only a few original portions left. The temples were constructed using curved brickwork with stucco application. Several motifs and sculptures adorn the facades of the temples.
The film provides a glimpse into the world of the Zamindars in Bengal. The Royal Palace of Khanyan also known as Itachuna Rajbari, also made a cameo in the film. Now a heritage resort, the Rajbari is divided into five mahallas – a village courthouse, a ballet dancing hall, kitchen house, a guest house and an Andar Mahal for ladies. A peek into the old world of Bengal, the oil lamps, jharbatis, and antique furniture take the visitor back to the 1950s. 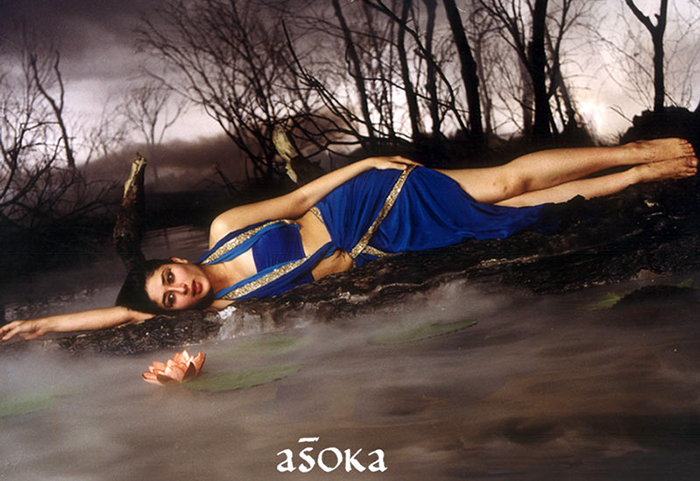 The scene is set with Kareena Kapoor practicing her sword wielding skills in front of a majestic temple dating back to the 10th century. Known as the “Gem of Odisha architecture”, the Mukteshwar Temple in Bhubaneshwar temple conforms to the classic architectural style of temples in Orissa. The Garba Griha (sanctum sanctorum) is a small windowless room with the idol of the deity. A stepped pyramidal roof over the Jagamohana (assembly hall) and the curvilinear spire of the Vimana (tower) are other features characteristic of Odisha architecture.
The film was shot on various other locations: the romance between Asoka and the princess at Panchmarhi, the palace intrigues of Pataliputra at Maheshwar, Madhya Pradesh, battle scenes outside Jaipur, the Kalinga scenes at Igatpuri and Bhubaneswar. The song “Raat Ka Nasha” was picturised at Bhedaghat and Panchmarhi in Madhya Pradesh on the banks of the Narmada River. The film is also known for using minimal special effects. 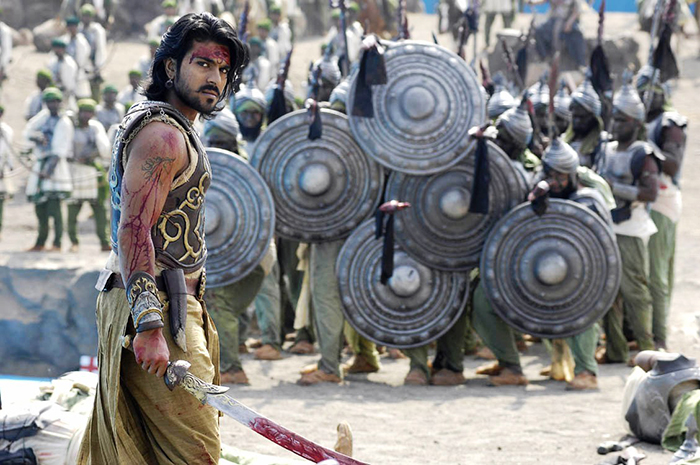 ‘Magadheera’ is considered the biggest blockbuster Telugu movie of all time. The film was noted for its extravagant sets and dazzling special effects. The beats of “Panchadara bomma” have us tapping our feet and bobbing our heads. The actors playfully frolic among the ruins of what was once a massive rampart of the Golconda Fort in Hyderabad. Golconda Fort is the biggest fortress in the Deccan plateau. Located on a 400 ft high hill, this fort has a reputation for being impregnable. With three lines of fortification, it took Aurangzeb nine months to capture the resilient fortress. Inside the fort lies the well-planned township of Golconda.
The shooting for the chariot race sequence took place in the Rann of Kutch, Gujarat. The salty, dry, open land with white sands in Dholavira was ideal for the vast battle scenery. While the chariot race sequence was shot in Dholavira, the quicksand sequence in which the chariot sinks was shot at a set in Ramoji Film City. After filming key parts of the film in Rajasthan, suburbs of Hyderabad and at Badami in Karnataka, filming continued in Ramoji Film City in a specially erected set. 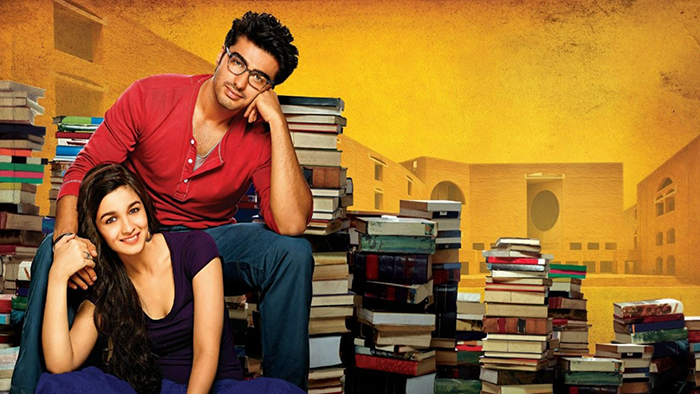 It is safe to assume that the wedding scene in the movie “2 States” caught everyone’s attention, who wonders about inter-caste or inter-state marriage. A traditional wedding against the backdrop of an ancient temple on a sprawling beach – what’s not to love? This temple is none other than the Shore Temple of Mahabalipuram. One of the oldest structural stone temples in India, the Shore Temple was constructed using blocks of granite. The main temple structure consists of a 60 ft high pyramidal structure sitting on a 50 ft high platform and is built such that the rising sun’s rays fall upon the Shiva Lingam inside the shrine.
Arjun Kapoor and Alia Bhatt’s song, Locha-E-Ulfat has been shot at the Indian Institute of Management, Ahmedabad, which is the first time a Bollywood film has been shot in this premier institute. The reason being that the Chetan Bhagat book on which the movie is based on, is also set in the institute. The film was also shot in other prominent locations of Ahmedabad such as Gol Limda Bhajiya House near Astodia Darwaza, Ahmedabad Railway Station, Police Commissioner’s office, etc. 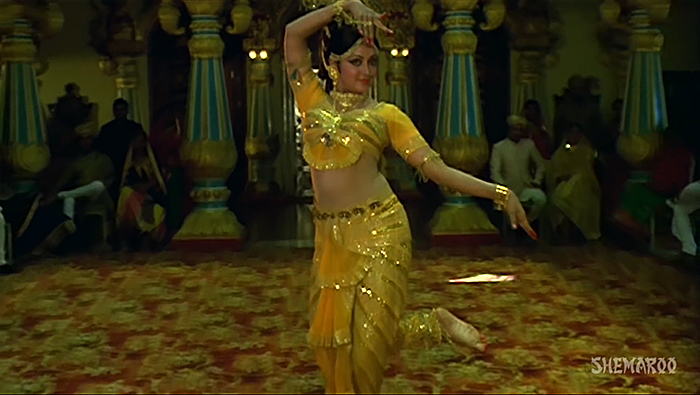 The song “Mere Naina Saawan” plays in the background as Hema Malini wanders in between gilded pillars and the hallowed halls of the Mysore Palace. The opulence and grandeur of this palace threaten to overwhelm the song’s haunting melody. Designed by Lord Henry Irwin, the Mysore Palace was constructed in the Indo-Saracenic style. Displaying varied influences from Hindu, Muslim, Rajput and Gothic architecture, it is a three-storey building of gray granite with pink marble domes, surrounded by lavish gardens. The central arch, above which a sculpture of Gajalakshmi rests, stands out from the series of expansive arches on the facade of the palace. With stained glass ceilings, chandeliers and semi-precious stones adorning the mosaic floor, no expense was spared for the opulent Ambavilasa. A rosewood doorway inlaid with ivory leads into this hall where the king would meet with private audience. The palace is not without an air of intrigue. The secret tunnels from the palace cellar lead to many places, one of them Srirangapatnam. The palace also plays host to the Mysore Dusshera festival, known for performances by artists and the parade with caparisoned elephants and floats.