Hope you have heard of anthropologists going deep into the wild jungles to discover unknown tribes… if they are not cannibals, those scientists survive, learn about the tribe’s culture and come back to civilization to reveal them… the discovery would make both of them famous!

In late 1990s, when I worked as a media coordinator for Madhyam, a social communication agency in Bangalore, I got a chance to discover a lost folk art form. I was quite enchanted by the intricate detailing of a Warli art from Maharashtra or a Madhubani from Bihar. I wondered if we could find a similar art form in south India. Karnataka is well-known for its performing folk arts such as Yakshagana, Bayalaata, Dollu Kunitha, Kamsaale, etc. However, not many know about the existence of a visual folk art form named Chittaara or Chittara.

I was pleasantly surprised to know that my home town of Shimoga district has a folk art form which is quite evolved and is getting national recognition. Some members of an adventure club had discovered it among communities living close to Jog Falls. This was getting really exciting… lost folk art form… found near a water fall inside deep tropical jungle… media has no clue of it… rediscovered by modern day David Livingstones… I was thrilled!

Dr. Kuruva Basavaraj, the Curator of Karnataka Janapada Parishat who had rediscovered Chittaara, informed me about it. He guided about where to go and whom to meet. So I set out on my own to rediscover Chittaara!

Traveling beyond Shimoga town, I took a bus to Talaguppa on the way to Jog Falls. Honnemaradu is a tiny village perched on the hills that overlook the Linganamakki Dam on the back waters of River Sharavathi. I met the caretakers of The Adventurers group’s watersport camp. They informed me that the Deewaru community who paint the Chittaara art, reside in the nearby villages of Gaddemane, Hasuvanthe and Manjina Kaanu. These villages are the cradles of the exquisite mural art of “Chittaara”, done by the women of the Deewaru Community. Interstingly, Manjina Kaanu, literally means ‘the mist of the forest’ and truly the thick tropical evergreen forest was awe-inspiring!

I met Ishwara Naik, an award winning Chittaara artist from Deewaru Community. Although Chittaara is a collaborative effort of the womenfolk in the community, Ishwara had taken up task of propagating the art to outside world.

Chittaara murals, painted intricately on the red mud coated walls of their houses, depict the important events of their life. Every line in the painting is symbolic of the life around them and the experiences they live through. The art forms, therefore, represent the daily hustle and bustle of their village life, the birds and animals around them, the toys their children play with, the flowers used for pooja, etc. 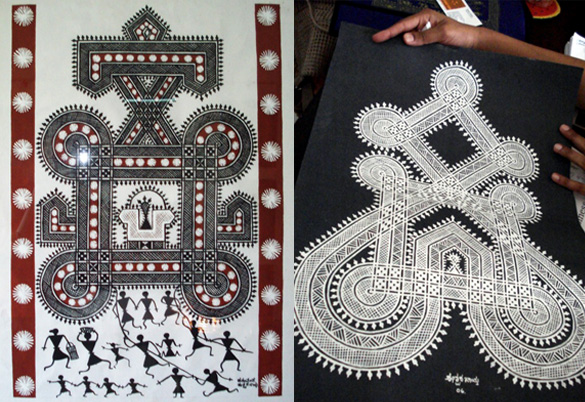 Music is interwoven into their art and folklore. Mesmerizing melodies fill households with vibrant notes. Every situation and every chore has a song. All their day-to-day activities like grinding flour, pounding rice, sowing saplings, removing weeds were enlivened by songs. However, this tradition of singing while working is fading away.

Marriage, the most important event in their lives, is shown in elaborate detail with the kalyan mantap (the wedding altar), guests, the couple and scenes of festivity. Sometimes there are occasions when two marriages take place simultaneously in a family, which is depicted in ‘Pappali Chittaara’. ‘Theru Chittaara’ illustrates the temple chariot festival where devotees are shown pulling the chariot. There is ‘Cheeku Bagilu Chinnaani’ in which the energy of the mind is depicted. Other murals are ‘Hadhinaaru Moole Arathi’ and ‘Mumdige Chittaara’, ‘Chittaara Chaavadi’ dealing with different themes.

These murals are done basically in four natural colours, White, Black, Red and Yellow. White colour is made of rice which is first thrashed and then pounded into a paste. Black is burnt rice ground into powder and Red is the laterite soil readily available in the surroundings. Yellow is the pigment colour extracted from the Gurige flower. All these colours are made by women of the household, who make large quantities of the powder and then use small quantities mixed with water every time they paint. They use the fine fibres of the pundi plant as paintbrushes.

Till now there has been little effort to document this art form or revive it, except for the work done by Karnataka Janapada Parishat in bringing this art form to light. The Adventurers Group working in that area has supported the artists by giving them shelter. An effort is being made in the village of Hasuvanthe, where a widow and her brother Ishwara Naik have taken up the task of teaching this art. Both of them decided that they would not only take up this art in a serious way, but also teach it to other interested young girls. They feel that if girls are taught this art, they will pass it on to their children after they marry. After three years of troubles and turmoil, resentment from the community and lack of economic support they have managed to give this art a status.