Gulshan Nanda – The Forgotten Novelist Of The Indian Cinema 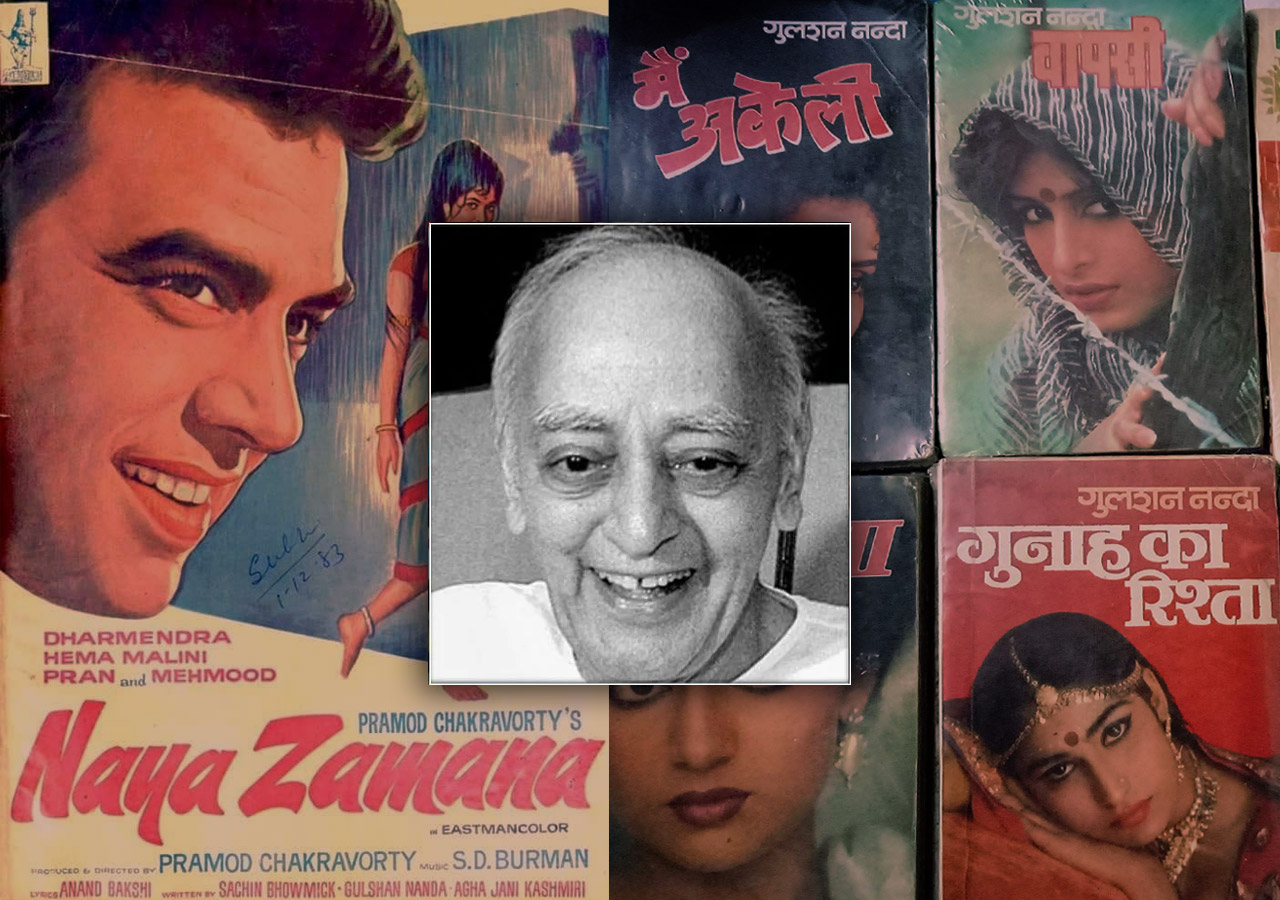 “…and that is how Gulshan Nanda rose to fame.” Recently, I recall my grandmother striking a conversation reminiscing the era of Gulshan Nanda, the man who knew exactly what the Indian audience wanted to read, or see in cinema. She struggles to find the novels in her trunk, which she previously bought from the Lajpat Nagar Market, New Delhi, in the 1970s. After having found Neelkanth from the trunk, she narrates how she read his stories in Upanyas during her school days. She snuggles the novel and then, recounts the life story of Gulshan Nanda:

“Gulshan Nanda bought a house in Vikram Vihar, Delhi before moving to Mumbai. Unfortunately, he never resided there, leading him to rent the flat. A relative of his used to collect the rent to send it to Nanda. The tenants later bought the house, and Nanda, thus, never returned to Delhi. His cinematic journey as a writer had so begun, with stories being hit on the big screen as well as read enough by the masses equally.”

I remember reading about Nanda’s birth in 1929 who grew up in Quetta (now in Pakistan), but came to Delhi before Partition. In Delhi, he began working as an optician but continued to write stories in Urdu (Read them here). Nanda’s first few books were published by Ashok Pocket Books and sold so well, they were constantly in print.

Next, she recounts the story of Neelkanth, which was the first novel she read during her school days. She reminisces the fear that was built page by page reading this horror novel in her childhood. Neel Kamal was the filmy adaptation of the book starring Waheeda Rehman, Raaj Kumar, Manoj Kumar, Mehmood, Balraj Sahni, Lalita Pawar and Shashikala and directed by Ram Maheshwari. A suspense thriller, or moreover horrific for a school child, she recalls the story of the protagonist sleepwalking several times in the novel, connecting dots to her previous life. My grandmother calls it the ghosts of the past and the love of the present.

That is how I started reading ardently about Gulshan Nanda on the internet and how cinematically, his career was overtaken soon. Evidently, there is not much coverage about him or his life story anywhere. Going through the set of books he wrote, numerically 51, I observe the covers, specifically with women on them.

With Tisca Chopra predominating two of the covers, I comprehend that most of his written pieces focussed on the plight of women and their relationships: their untalked social predicaments, their romantic relationships, a trope of reincarnation and often exaggerated storylines in reference to their kins.

Undoubtedly, Nanda underlined flaws in his female characters as well, waiting to be saved by a male counterpart, elongating the damsel in distress plot. Pick up any of his novels, be it Naya Zamana or Kati Patang, the trope of women subjugating their voices to fall in line with the hero

resurrecting them was recurring throughout. And the audience applauded the plotline each time they walked out of the cinema halls.

Say what I may want to say about Nanda, he was and remains one of the most celebrated pocket books writers. I read somewhere that the libraries had a separate section of his books, yet were considered unattractive for academic consumption. Other writers such as Prem Bajpai, Rajvansh, Kushwaha Kant, Ranu existed, but did not unfold the success that Nanda did. Readers relished onto the fairytale-like new -age novels, flouting the rules of gender roles. Publishers happily chased him to unravel a new storyline and make more economies, for instance Jheel Ke Us Paar claiming to have sold half a million copies.

Nanda, is and will continue to be the success of novel-to-film adaptations since he knew the style of sewing a storyline keeping in mind its visual presence. To look at his associations, he first wrote Punarjanma, released in 1963, a Telugu film based on Nanda’s story. This comradeship with the Hindi Cinema continued for over two decades, until his last film written by him was released – Bindia Chamkegi in 1984. For some of these films he wrote stories or screenplays, while some were based on his pre-published novels. He worked with some of the best known and widely respected banners and directors in Hindi cinema, namely L.V.Prasad, Ram Maheshwari, Shakti Samanta, Subodh Mukherjee, Yash Chopra, and Chetan Anand. He truly earned the title of writer of family films, making him hugely successful commercially,

However, what Nanda did not calculate in his immaculate, repetitive storylines was that change comes every decade. He failed to study the change of taste of his audience, despite having ruled the solely-entertainment-oriented screenwriting of the 1960s, the 1970s and part of the 1980s, only to be further replaced by other, more contemporary, ‘writers’ or now, ‘brands’. That called for the end of an era of Gulshan Nanda, the dedicated master of contemporary pocket books. Undoubtedly, the writer lives on, with his stories easily converted into movies that are still watched extensively on the big picture.