A young Kashmiri singer has become a sensation not only in Maharashtra, where she is staying at present, but has also transcended the national boundaries. Shameema Akhter has sung songs in Punjabi, Bengali, Dogri and in her mother tongue Kashmiri. However, her Marathi devotional songs are being applauded on social media in the subcontinent, including Pakistan, Nepal and Bangladesh. Millions of people have viewed, liked and shared them. She credits her success to the religion she belongs to, saying humanism is the very basis of Islam, and adds that Hinduism and all other religions propagate humanism too. Popular Marathi devotional songs appeal to her fans in Pakistan and Bangladesh because they promote peace and love among people of diverse faiths. She is thankful that Maharashtra, particularly Pune and NGO Sarhad with which she is currently associated, has provided her a platform to showcase her singing talent to the world. Here are some excerpts of her interview with Shirish Shinde.

Q: How did you develop interest in music?

My Nana (maternal grandfather) was a poet. He used to play the Rabab, a Kashmiri string instrument. My Dada (paternal grandfather) was a ‘Pir’ (saint). Both were followers of Kashmiri Sufi saint Lala Aragami. During the Urs (festival held in the Sufi saint’s memory), qawwalis and devotional Sufi songs used to be played continuously twice a year in my home. I grew up listening to these songs. Later, I started developing interest in them. I used to sing during school assemblies. Looking at my interest in singing, my Abbu (father) asked a classical music expert in Srinagar to teach me music. So once or twice a week, I used to travel from Bandipora, my hometown, to Srinagar just to learn Hindustani classical music. I wanted to learn more. So, my father sent me to the Bhatkhande Music University, Lucknow. I completed my ‘Visharad’ masters in Hindustani classical music. I have also taken music exams from the Allahabad University. Mazhar Siddiqui, my friend and music guide, I met during my college days in Lucknow. We are working together. He composes music and I sing for Sarhad Music, a YouTube music channel. Mazhar has taught a lot to me in classical music.

Q: How long did you practise music daily (Riyaz) during your college days?

I used to stay in a hostel. My room-mates and I used to practise singing all the time, around 4-5 hours daily. It was my daily practice to complete at least one Raag (a basic melodic structure for improvising, similar to a melodic mode). I was passionate about learning music. I used to be among top two students in my class. I used to practise just one note such as ‘Sa’ for one hour on the Tanpura daily. This was new to us. I used to practise it on the harmonium, which was not allowed in the Bhatkhande University.

Q: How did you get associated with Pune-based NGO Sarhad?

I used to hear about Sarhad in Kashmir during my childhood. Some of my childhood friends had joined the Sarhad School, which I also wanted to. However, it did not materialize. In 2016, I visited Pune to participate as a singer in a Kashmiri Festival, where I met my childhood friends from Sarhad. I thought that I could realise my dream to become a singer here in Pune. Sanjay Nahar Sir, who is a Farishta (an angel) to us, has been mentoring me and other Kashmiri students. However, I joined Sarhad Music later in 2018 after completing my studies. We started our music band Gaash (meaning ‘light’). My sister Rukaya Maqool is also a singer in this band. We want to spread the message of peace and brotherhood through our band. I am helping Marathi and Bengali singers to sing Kashmiri songs while they give me tips in singing in their respective language.

Q: What is the reaction of non-Maharashtrians when they listen to your Marathi devotional songs?

My family, particularly my father, has been very supportive. My father, though he doesn’t understand Marathi, listens to my each new Marathi song several times. He asks me their meaning. Some relatives show their disapproval, but my father says, ‘If you are honest to your roots, you can sing songs in any language and from any religion because all religions teach humanism’. However, many of my Kashmiri neighbours, friends and others in Kashmir praise me and wonder how I could accomplish this by staying outside Kashmir. They appreciate my efforts. We have been reaching out to people in various States through Gaash. After I sang ‘Pasaydan’ composed by Sant Dnyaneshwar, it became an instant hit. I was interviewed by a popular Marathi TV channel. Pasaydan got over a million hits within the first week of its release. We had a show in Kolkata. Then we performed in the annual Kashmiri Festival in Pune. Recently, we had an online show for the Indian Academy of Science, Bangalore. We had to decline many offers from other States after the pandemic reached its peak.

Q: How do youngsters respond to your songs?

We get many messages on a daily basis. Youths are very positive and supportive in Maharashtra. They call me ‘Tai’ (elder sister). Even Muslim youths from Maharashtra, UP and other places post affirmative comments. A Maharashtrian youth became emotional and posted that he wept after listening to Pasaydan. He asked other youths also had similar experiences to react to his comment. Around a thousand had a similar experience.

Q: How do you select these ‘Abhangs’ (devotional songs) for singing?

We deliberately choose those songs, which are already popular and sung by stalwarts such as Lata ji or Bhimsen ji. People like them because they are sung by a Kashmiri singer and composed with some improvisation. Abhangs such as ‘Runuzunu runuzunu re bhramara’, ‘Maze maher Pandhari’, ‘Pail to ge kau’, ‘Vrukshavalli amha soyare’, etc have got overwhelming response from listeners. My rendition of ‘Ek Omkar Satnam’ was lauded by Punjabi singer-composer Diljit Dosanjh. Celebrities such as Chief Minister Uddhav Thackeray, Raj Thackeray, Anna Hazare and many others have personally conveyed their good wishes. People have been demanding new Abhangs. We are recording them now. 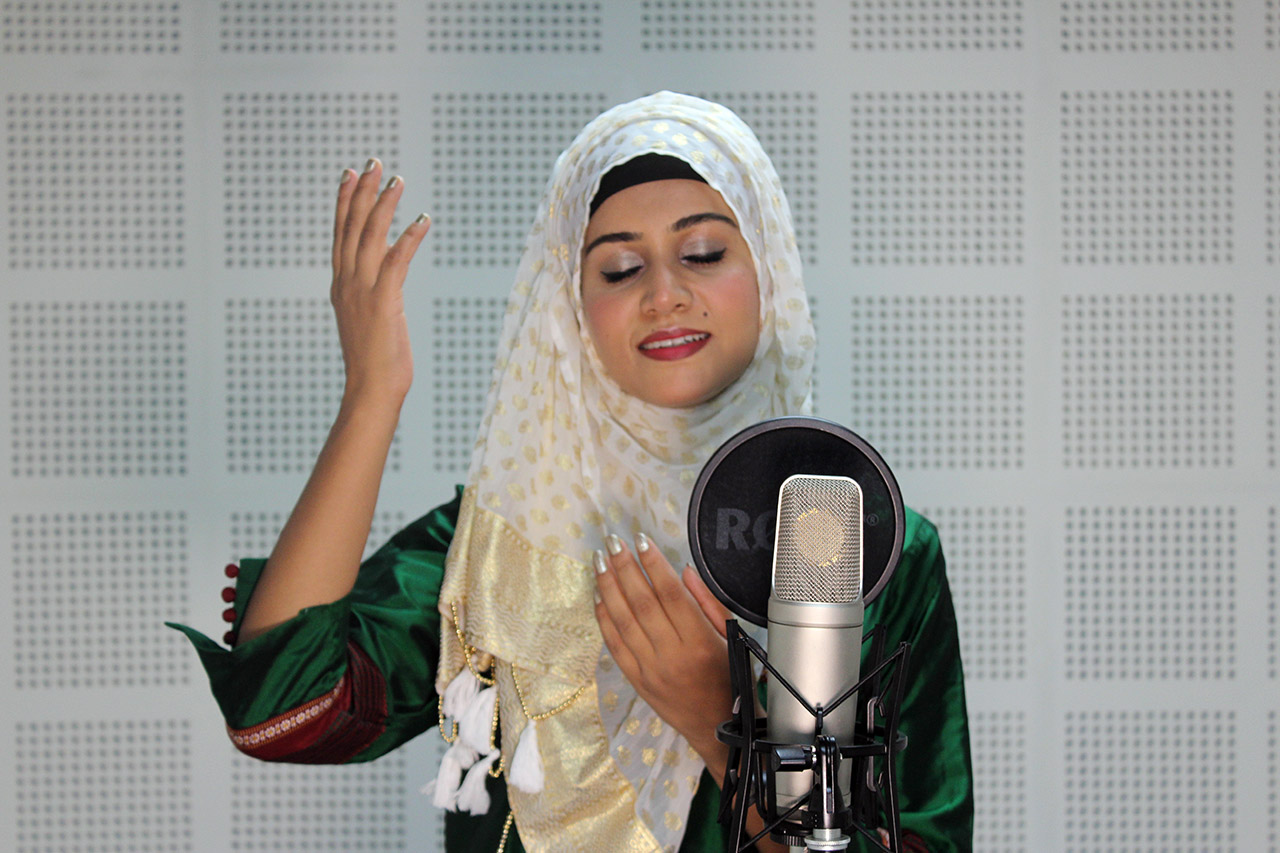 Q: How do you prepare before you sing a non-Kashmiri, non-Hindi song?

Initially, I repeat it several times till I master pronunciation of those words. Then I write the entire song in Urdu. I do dummy recording. Then I understand meaning of each word, which gives me a fair idea of emotions attached with each line. This helps in expressing those feelings and emotions in the final recording.

Q: Who helps you with Marathi?

Sushma Nahar Madam and Gopal dada have helped me immensely with ‘Pasaydan’, which is a Dua (prayer) for ‘world peace’ and is sung in Maharashtra and Marathi people across the world. When I understood its meaning from both of them. I was awestruck. It is a beautiful poem. Our Kashmiri friend Zahid Bhat, who speaks fluent Marathi, also helps me with Marathi. Mukhtar Dar has also been very supportive.

Q: What do you find common to all these Indian languages?

Since I have learnt classical music, I started singing ‘Bandish’ (a melodic composition) in Sanskrit, Persian, Hindi, Urdu, Avadhi, etc. in a particular ‘Raag’. A Bandish has a few lines, which I practise. I see the composition from the angle of a Raag, then everything else falls in place. I develop my own ‘Aalaps’ (improvised prologue in a Raag). Hence, learning classical music is imperative for a singer.

Q: How much time do you spend on a composition?

Since we choose cover songs for singing, we don’t have to spend much time. However, two to three weeks are spent on preparing a song.

Q: Can you recall a particular experience after becoming popular on social media?

My parents have always been boosting my morale. Still, I used to have some doubt, I don’t know why. However, when I sang ‘Maze maher Pandhari’, a Pakistani youth YouTube channel, which reviews music, did a rave review and was liked by thousands of Pakistanis, I realized the universal appeal of these renditions. I was happy that non-Maharashtrians, Muslims related to the message of peace and love. When the news of reactions from Pakistan was broken to me, I was scared for a moment. My family is in Kashmir. Initial negative feelings gave way to happiness when I learnt that it was hugely applauded in Pakistan also. Devotion knows no barrier of language or religion.

Q: What is your message to Kashmiri youths?

I always tell my Kashmiri friends that they should have a plan B ready. Those who want to become singers should first learn classical music. This improves quality of your voice and you can sing in other Indian languages also. Sarhad is planning to establish a music university. We will help Kashmiri youngsters, who want to pursue a career in music.