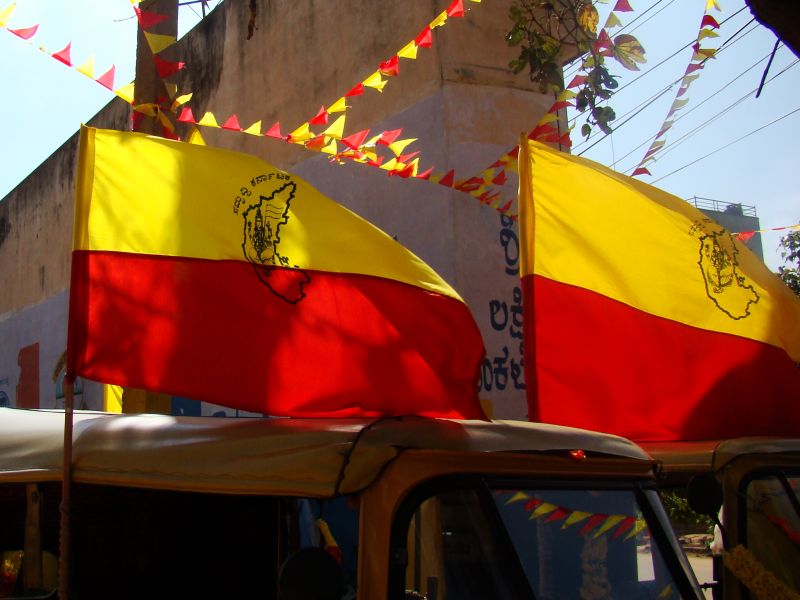 Karnataka is a land of culture, after gaining immensely popularity around the world as being the IT hub of India, the state has become a treasure trove for investors and a lucrative land for corrupt politicians.
However, there are some things about this state that hasn’t changed at all… like the culture, the hospitality, the processions, the cuisine and the language.

Ah! Kannada language!! Before the ‘IT boom’, Karnataka was primarily conversing in Kannada, and little bit of Telugu, Tamil and Marathi. The diction of North Karnataka people is slightly different in Kannada, which borrows a lot of words from Hindi and Marathi. And as you move up near the border towards Maharashtra, the language gradually changes to Marathi.

Back in the 1990s when I visited my granny’s place in Belgaum, I remember her saying something like “Priya, Kannadi madhe bolun dakho” (Priya, Speak some Kannada for me!) It really took me some time to realize that ‘Kannadi’ meant Kannada. I corrected her, but you know how it is with grannies!

However, after that incident, I kept my ears open for anyone saying Kannadi instead of Kannada. I was in for a major shock! Apparently Kannadi had a new synonym, and it was best friends with ‘Kannad’. Imagine my frustration when I had to deal with Kannad and amaze at a person’s inability to get the name of language right. We never say Marath, or Malyal or Hind, right?, so why does the world find it so difficult to say KannadA??? It’s a humble ‘A’…

It also reminds me of the infamous pronunciation of Hindi news readers calling the then prime minister, ‘Devegoda’, while it was ‘Devegowda’, as in ‘Gaul’! Forget pronunciation, most non-Kannadigas residing in Namma Bengaluru feel they can get by knowing little or no Kannada at all. How come learning a local language is not a necessity even after residing in that city for years? Can you live in Ludhiana for a few years and say I don’t know Punjabi?

I feel the primary reason for the locals’ resentment against North Indians is their utter disregard to local language. I have seen many North Indians arguing with an autorickshaw driver or the milkman in Hindi. Why don’t they have the cultural sensitivity that it is difficult for we south Indians to learn Hindi?! Obviously this kind of animosity leads to mindless violence against some innocent victim like the Manipuri student who got injured recently.

Anyway, I think it is high time we Kannadigas talk to everyone in Kannada; only then outsiders will be forced to learn Kannada. Thankfully, there are some great initiatives like Kannadagottilla.com that promote Kannada as the primary spoken language!