English writing by Indian women has today established itself in the realm of fiction and has earned laurels both at home and abroad. They began their work by questioning the traditional patriarchal domination. In the early days, Indian women writers penned down about their perceptions and experiences within their domestic surroundings, assuming that would fetch them more acceptance from the society. Writings by women gained momentum during the British Raj, although most of these writings were concentrated on the country’s freedom struggle.

By the early 20th century, several Indian women writers started to write in English language. Before the rise of novels, women writers concentrated more on composing songs, short stories and plays. These female writers became a powerful medium for modernism and feminism. The present generation women writers are mostly western educated thus, their work cover the contemporary issues of women and those of the problems lingering in the society for decades, attracting a massive following of readers.  Here is a brief list of few well-known women writers in India and their writings in English:

Nayantara Sehgal is one of the first Indian writers to be widely recognized in English writing. Born in the Nehru family in 1927, her stories mostly depict the politics and history of India’s elite during the independence movement. Apart from political issues, she is a writer with feminist concerns and seeks independent existence of women. Her discontentment with patriarchal treatment towards women in the Indian society is quite evident in her novel Mistaken Identity (1988), which boldly reflects in her female character, a complete rebel.

Nayantara Sehgal holds prestigious positions as a member of various literary organizations and has won many accolades for her contribution to literature. She won the Commonwealth Writers Award in 1987 for her novel ‘Plans of Departure’. Her fiction work, Rich like Us won the Sinclair Prize in 1985 and the Sahitya Akademi award in 1986. However in 2015, she returned her award to the Sahitya Academi and spearheaded the ‘Award Wapasi’ campaign in view of the growing intolerance on Freedom of Speech across India and the Akademi’s inaction over the killings of rationalist writers.

Anita Mazumdar Desai is a well-known novelist and author of children’s books. Born to a German father and a Bengali mother in 1937, her family frequent moved across different cities of India, which facilitated her stories to have diverse backdrops. Her writings evoke an excellent character and moods through visual images ranging from the meteorological to the botanical, which meticulously depict the modern Indian life. She is referred by many as the ‘Mother of Indian psychological novel genre’ and was touted as “one of the preeminent contemporary Indian novelists” by British Writer A. Micheal Matin.

Although, Anita Desai does not view herself as a political writer, her stories powerfully and accurately deliver her social commentaries. For instance, suppression and oppression of Indian women were the subjects of her first novel – Cry the Peacock (1963).  Her Novel, Fire on the Mountain was awarded the Sahitya Academy Award in 1978. In 1983, she won the British Guardian Prize for The Village by the Sea. She has been shortlisted three times for the Booker Prize for Clear Light of Day (1980), In Custody (1994) and Fasting and Feasting (1999). She is currently Emerita John E. Burchard Professor of Humanities at the Massachusetts Institute of Technology, US.

Shashi Deshpande, a well known name in the field of Indian literature, is the daughter of the renowned Kannada dramatist and Sanskrit Scholar, Sriranga. She was born in Dharwad, Karnataka in 1938 and was educated in Bangalore and Bombay universities. She wrote her first short story in 1970 while working as a journalist for a magazine. Soon, her short stories were frequently featured in popular magazines. In 1978, she published her first collection of short stories titled ‘Legacy’ and her first novel – The Dark Holds No Terrors in 1980.

Shashi Deshpande’s writing comes out of a deep involvement with the society she lives in, especially among women. Her novels are about women trying to understand themselves, their history, their roles and their place in this society, and above all their relationships with others. The Indian society’s bias attitude towards women, which she views as oppressing, is evident in her writings. Her works have been shortlisted for many literary awards. Her novel titled That Long Silence won the the Sahitya Akademi Award in 1990. She is a recipient of the Padma Shri Award in 2009.

Suzanna Arundhati Roy is an internationally acclaimed Indian fiction writer, essayist, actress and an activist. She was born to a Bengali father and a Keralite mother in Shillong in 1961. After her schooling in Kerala, Arundhati proceeded to pursue architecture at the Delhi School of Architecture. Her writings are popular among fiction enthusiasts and political activists.

Arundhati Roy’s critically acclaimed book ‘The God of Small Things’ won the Man Booker Prize in 1997, which is perhaps the first novel she wrote. Since then, she has turned an ardent activist for various political and social issues in India and across the world. She is a figure head of the anti-globalization movement and a vigorous critic of neo-imperialism.  She has been acclaimed for her courage and eloquence to fight for social causes.

She has won many accolades for her writings globally, including the Sydney Peace Prize, Lannan Foundation’s Cultural Freedom Award and the Norman Mailer Prize. In 2006, her collection of essays, The Algebra of Infinite Justice was awarded by the Sahitya Akademi. However, she declined the award to protest the Indian government’s policies. She was featured in the Time’s 100 most influential people in 2014. 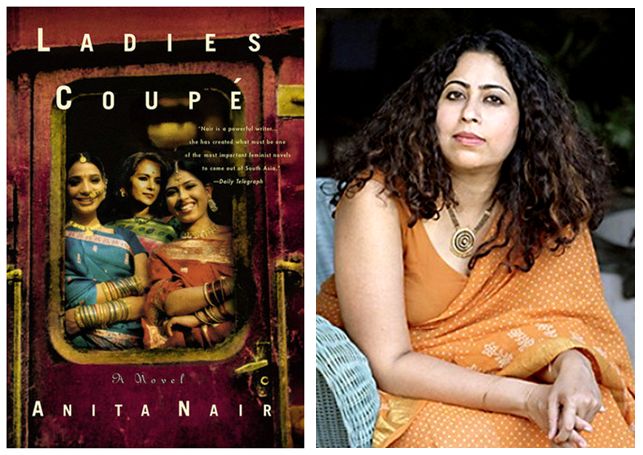 Anita Nair is a Bangalore-based writer, who has written novels, short stories, poems, children’s stories, plays, travelogues since 1997. She was born in Shoranur Kerala in 1966 and completed her education in Chennai. While working in an advertising company, Anita wrote her first collection of short stories – Satyr of the Subway (1997), which won her a fellowship from the Virginia Centre for Creative Arts. She has written numerous novels of which the widely acclaimed and bestselling are: The Better Man, Ladies Coupé and Mistress that are translated into 25 languages.

Anita Nair’s collection of poems tiled ‘Malabar Mind’ was published in 2002. These poems portray ordinary things with extraordinary dimensions, where metaphors capture the strength and resilience of life. Her collections of essays, ‘Goodnight and God Bless’ describes the many flavors of happiness presented as chapters in a book. Her books on children are about change, friendship and bravery with a touch of humor. Many of her works were shortlisted for literary awards nationally and internationally. She was awarded the Kerala Sahitya Akademi Award in 2012 for her contribution to literature and culture.