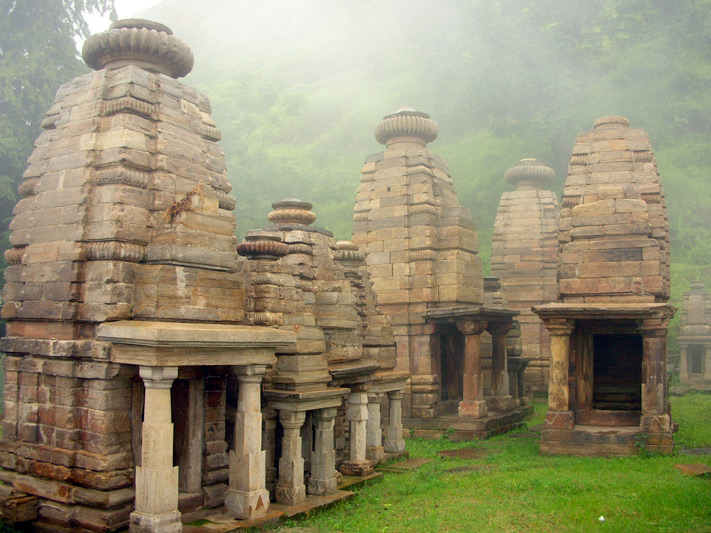 Our wanderlust woman returns again, this time discovering a sun temple hidden in the mists of time! Here is a travelogue about a great offbeat destination in North India…

When I headed off to explore the Garhwal Himalayas in the month of July, I wasn’t quite certain what I had to be prepared for. However, topping that list were the rains. The incessant drizzle followed us with chilly determination. It trailed us as we left Kathgodam and reached Nainital, and finally to Almora.

The drizzle’s persistence was a tad irritating because we had to hold onto our umbrellas all the time, and also, because it covered every advertised view point with mist, leaving us with a singular view – an opaque sheet in white!

However as the day progressed, the light rain transformed Almora, into a place out of fairy tales. It added a snowy edge to the wooden houses, brought out the large colourful umbrellas and turned the city into a freshly washed delight. Then I got to know about the sun temple at Katarmal, but it wasn’t a part of my itinerary. It wasn’t on our way to Kausani although it was only 17kms from Almora. The question was whether to go off track and see this temple or stick to our itinerary? We decided it will be answered by the weather the next day.

Thankfully, the morning brought with it some sun albeit behind the lingering clouds. With the promise of light, Katarmal could easily be accommodated. Additionally, if the Sun God at the temple was pleased with us, he could just grant us some extra sunshine.

About half an hour away from Almora, towards Katarmal, the motorable road ends. After which, there is a 2km stretch that needs to be done by foot. The little trek on the muddy slopes of a steep climb, requires immense resolve. The view continues to be enchanting – mountains, deodar trees and droplets from the rain shower still clinging on green leaves. This place does not see many visitors (a few foreigners and local devotees), does not have proper roads or information to lead us there. 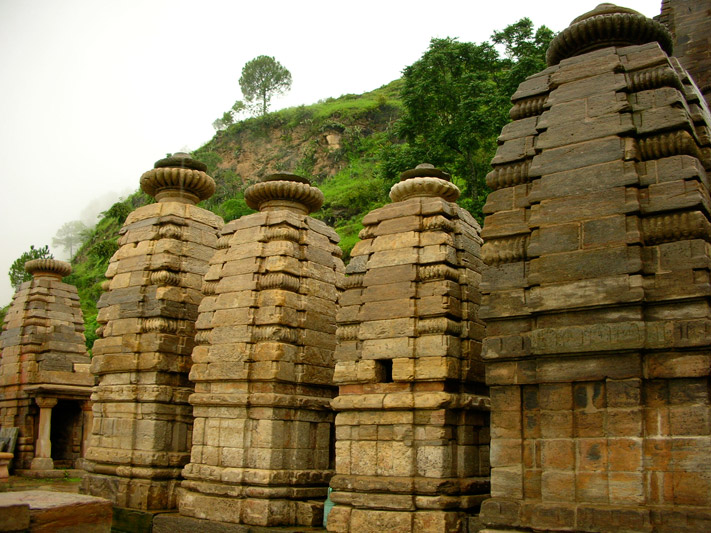 But, all my doubts about this place were wiped clean by the very first sight of this spectacular temple complex. It is huge, beautifully crafted, historically significant, surprisingly welcoming and filled with serenity. What took me aback was the suddenness of it appearance. As we were climbing, we expected some usual activity around the momentous place – people, boards, vehicles… something. At 2,116 metres above sea level, one does not expect a massive stone structure or a cluster of temples! 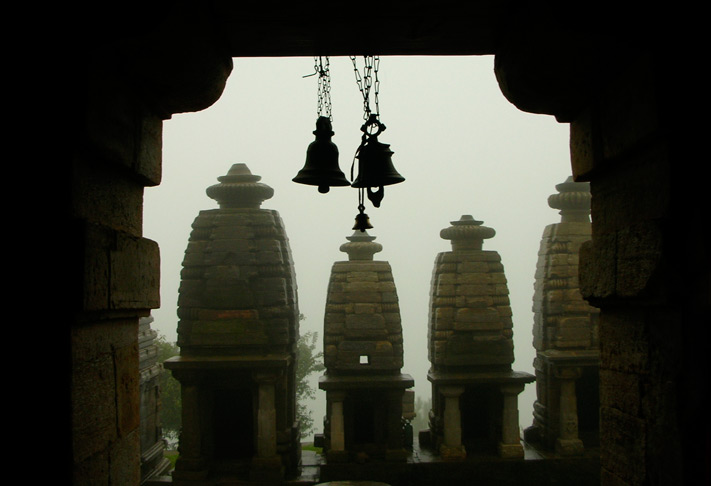 Popularly known as ‘Baraditya’ or ‘Vraddhaditya’, the Katarmal Sun temple is a unique cluster of temples which is the tallest temples in the Kumaon region and is believed to be the second most important sun temple in India, after the Konark Sun temple in Orissa. It was built somewhere between in the 9th – 13th Century by King Katarmalla who ruled the Kumaon region. In those days, the Kumaon state extended from Garhwal in Uttarkand to parts of Nepal up to Afghanistan. Katarmalla was a popular medieval king of the Katyuri dynasty, which is also linked to the Suryavansha lineage tracing back to Lord Rama and the Sun God. 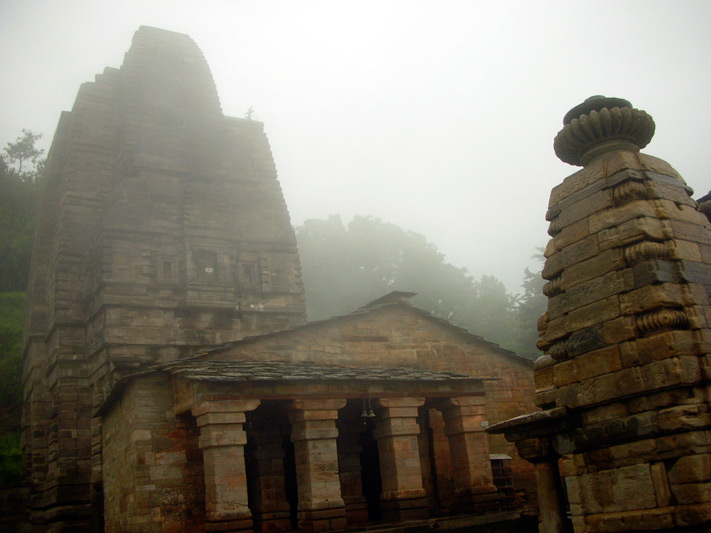 This temple of the old Sun God, Vraddhaditya, is built in the typical Katyuri style. The architecture uses massive pieces of stone. These pieces of stone were painstakingly carried to the top of the mountain to create this architectural marvel. Around the main temple, are 45 shrines built in the similar style. The Katyuri style involves extensive carving on pillars and doors, intricate figurines of metal and stone, and large pieces of stones held together by metal clamps. The Katyuri kings were great patrons of art which is quite evident in their architecture. The Almora and Bageshwar districts are dotted with hundreds of stone temples such as the Baijnath and Jageshwar temples.

Inside the main temple along with the statue of Vraddhaditya, other deities are also present. The locals believe that this shrine is significant for two reasons. One, this is the only Sun temple in the hills, and second, in the months of February and November, the sun rays fall directly on the deity making it an extraordinary sight. 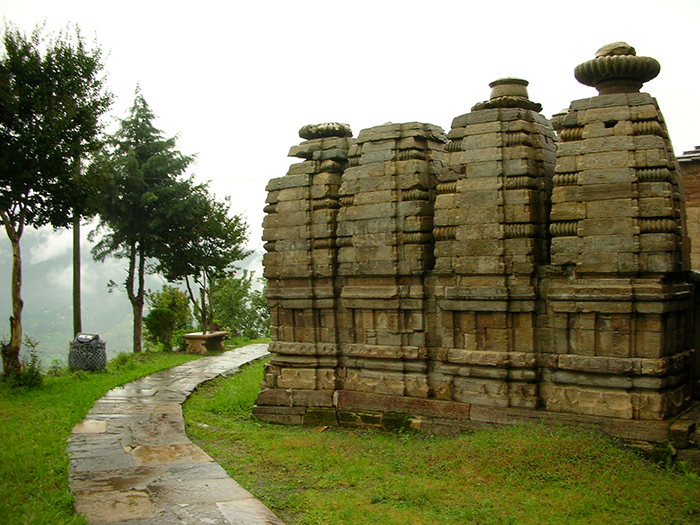 Off late, this 800 year old temple has fallen into neglect. I spent some time walking around the complex. Since it is on the top of a mountain, the open space is not too large. The light drizzle made its presence felt again and the stone structures gained a glossy appeal. The clouds moved along at eye level. I realized with great amazement that I was briefly in the clouds. It was almost magical to see it leave me behind to move on to envelope the main shrine of the temple and then the mountain range behind it. The clouds moved like a thin white veil pulled away by an invisible hand.

Katarmal Sun temple was my surprise encounter with history. It was very real yet had a touch of dreamlike charm. The cloud that moved swiftly, enveloping each temple one at a time, fascinated me. It’s difficult to imagine what I might witness here, in another season. The history is real and concrete, but the intangible forces of nature at that altitude adds dramatic effects to the place. I am waiting to go back again to see what’s waiting to receive me!