The ancient Rajputana culture of Rajasthan remains engraved in the comparatively modern lifestyle of people. Great dynasties like those of the Rajput and the Marathas have contributed to the diverse and rich history of the state. The vast expanse of deserts, olden forts and palaces, and vibrant arts, all represent the culture of Rajasthan.

We explore in detail below the aspects that govern the traditions of the land. 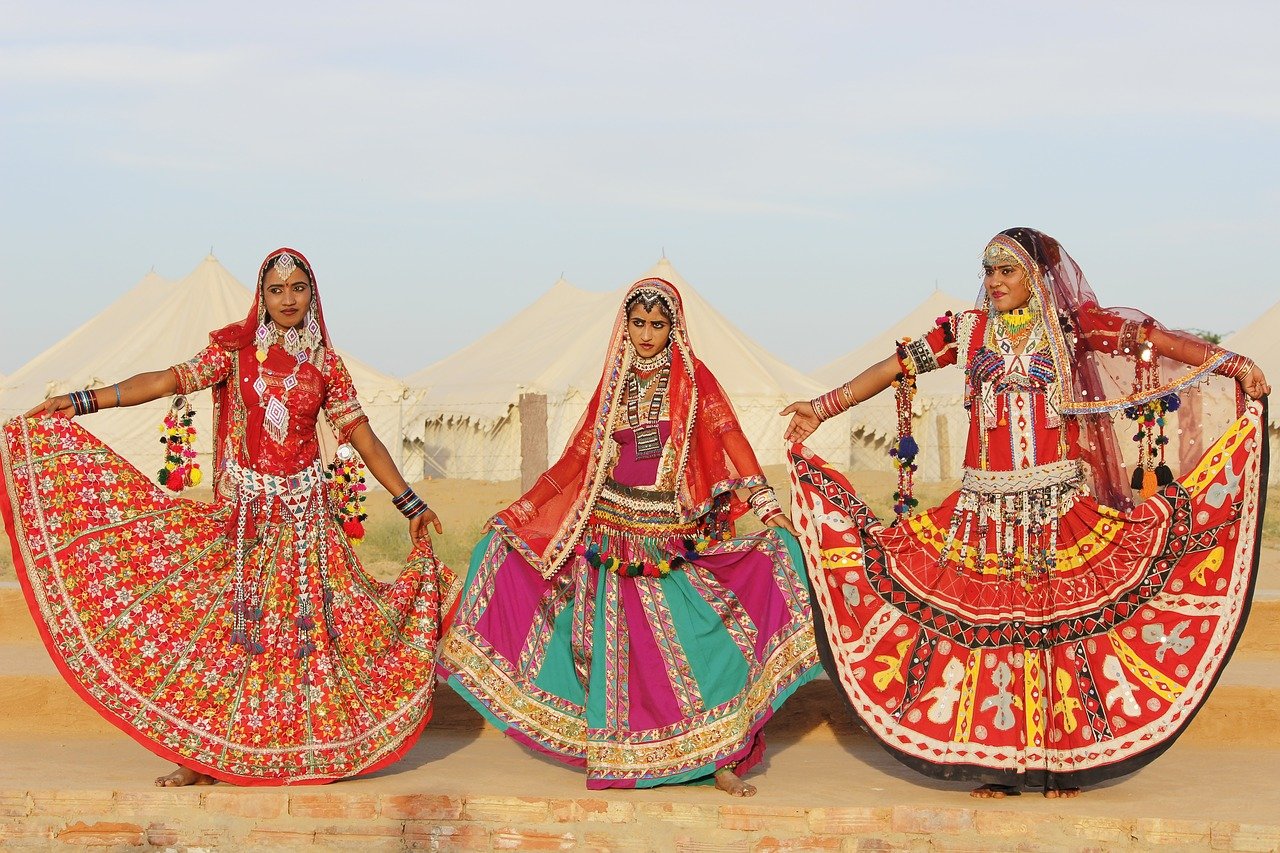 The traditional dress of Rajasthani women comprise the long, gorgeously embroidered skirt called Ghagra, the blouse called Choli and the light cloth of Odani draped over their head and shoulders. The men, on the other hand, wear a cotton cloth called the Dhoti wrapped around the waist under a traditional shirt known as Kurta. The headgear of Pagadi is an important aspect of their attire as a mark of cultural pride.

Music and Dance of Rajasthan

The multitude of dynasties that ruled the land of Rajasthan resulted in a diverse variety of folk music and dance from one region to another. They are similar in flavor yet different in their techniques and styles. The reputable groups of Manganiyar and Langa have made valuable contributions to the folk music of Rajasthan. The Ragas are dedicated to appropriate occasions, as during the pre-monsoon season when the performers call upon the rains. Other famous folk groups include the Banjara, the Mirasi, and the Jodi.

Most of the folk songs, usually in the form of ballads, pertain to special occasions like weddings and birth ceremonies. They narrate tales of valor and love, which are passed on from one generation to another. The dance forms also vary according to the locations. In ancient times, they were mainly performed to entertain the King. Ghoomar, Chang, Tejali, Bhopa, and Kathipudi are historical forms of Rajasthan dance. Some of the traditional instruments that mark the Rajasthani culture are Sarangi, Kamayach, Shehnai, and Dhol.

The variant spices and sweet delights of Rajasthani cuisine lure tourists to try out the delicacies. The popular Dal Bati dish consists of pulse, wheat flour, and yogurt, all dipped in ghee. The spicy Pyaaz Kachori and the sweet Mawa Kachori are available all across Rajasthan food stalls. Among the sweet dishes, Ghewar and Gheriya originated in Mewar and are offered in most eateries of Rajasthan. Although most of the population is vegetarian, Lal Maas and Mohan Maas are two of the scruptiptipus meat preparations of Rajasthan culture. Drinks like Jaljira and Masala Chach are refreshing and unique. Mirchi Vada, Kalakand, Gatte, Malpua, and Kadhi are some other notable cuisines that entice food lovers.

The buildings, forts, and other structures in Rajasthan exhibit an imbibement of Islamic, Hindu, colonial as well as post-colonial architecture. Some of the exemplary sites that put on display the brilliance of Rajasthan architecture include the Ranakpur Jain temple, built back in the 15th century. It is built in the Maru-Gurjara style of architecture that incorporates various shapes and structures, on the domes, upon pillars, and on the ceilings.

The Umaid Bhawan Palace, built by Maharaja Jai Singh II and located in Jodhpur, is constructed in Beaux-Arts style, bringing together Western and Indian styles. The historical Jaisalmer Fort and Golden Fort were both built by Rajput king Rawal Jaisal, in 1156 AD. Regarded as a World Heritage Site by UNESCO, the fort contains several gates, Jain temples, and Havelis. The city of Jaipur lives up to its iconic title with its flourish of pink-colored buildings.

The primary religions of Rajasthan are Hindus, Muslims, and Jains. The state abounds with numerous reputed pilgrimage sites, like the Lodrakar Jain Temple, the Ranakpur Jain Temple, and the Jagdish Temple.

Arts and Crafts of Rajasthan

The artisans of Rajasthan offer a wide collection of carpets, ethnic garments, jewelry, and ornaments. Camel leather is the most commonly used item to make shoes, bags, and journals. The carpets are woven in Persian hand-knitting style, designed with geometric patterns and shapes. Showpieces and toys made of terracotta and clay are decorative pieces and a gleeful sight, particularly for children. The Safah or the Pagadi is a craft of heritage. Numerous shops offer antique pieces from the times of kings and nobles.

Marwari is the most widespread dialect of Rajasthan, other than Malvi, Mewati, Jaipuri, or Dhundhari. Since a major part of the economy is based on tourism, the natives have learned Hindi as well as English to be able to communicate better with the tourists.

Rajasthan organizes a variety of festivals that brings together the people in joyous harmony. The iconic camel fairs take place every year in regions like Bikaner, Pushkar, and many others. Dedicated to the camels and their owners, there are several events organized that go on for a couple of days, especially competitions like camel races and camel dance.

The Rajasthan International Folk Festival draws in visitors from all across the country as well as from beyond borders. Artists showcase their exquisite talents in this festival of Jodhpur.

The Udaipur Mewar Festival, the Teej Festival, the Summer and Winter festival at Mount Abu, and the Brajholi festival of Bharatpur with its famous Raasleela dance are some other popular festivals of Rajasthan.

An ancient custom that the people practice is known as the ‘Samskaras’. These refer to a total of 16 different important points in a person’s life which are celebrated as occasions. The chain of Samskaras starts with Garbandhan, marking the point of the child’s conception, and ends in Antyeshti, which are the rites performed after death.

The people of Rajasthan believe in and practice the notion of ‘Atithi Devo Bhava, wherein they treat a guest as equal to God. The famous welcoming folk song of ‘Padharo Mhare Desh’ exhibits the kind of spirit the people have when it comes to tourists and visitors upon their land.

Rajasthan is a state that attracts hundreds of tourists throughout the year. The depth of its folk culture and practices bear historical dignity. It is one of the most enriching and ornate states of India.