Traditional Dress of Rajasthan: Reflects a Culture that Persisted Since Ancient Times

The costume of Rajasthan reflects a culture that has persisted since ancient times. Despite metropolitan influences, the people of Rajasthan still hold onto a traditional lifestyle and culture. Such is especially witnessed during times of festivities and occasions when communities gather together to celebrate. Olden forts, ancient towns, captivating folk arts, and recognizable costume and cuisine, all make Rajasthan a popular tourist destination among the Indian mass.

We explore the diverse colors of the traditional dresses of Rajasthan below.

The conventional attire that the women of Rajasthan wear comprises the long exuberant skirt called Ghagra. The top garment is called Choli or Kurti. Along with this, they also cover their head or drape around their shoulders the long, light fabric called Odani.

The Ghagra has gorgeous embroidery, is full-length, and pleated. Usually made of silk, cotton, crêpe, or georgette, it is available in a variety of bright colors and intricate patterns. The most predominant style of printing techniques is the Bandhej, Laharia, Tie-and-Dye, Mothra, and Chundri. The ghagra often has flourishing borders and Gota-Patti work which impart a regal elegance to the garment. 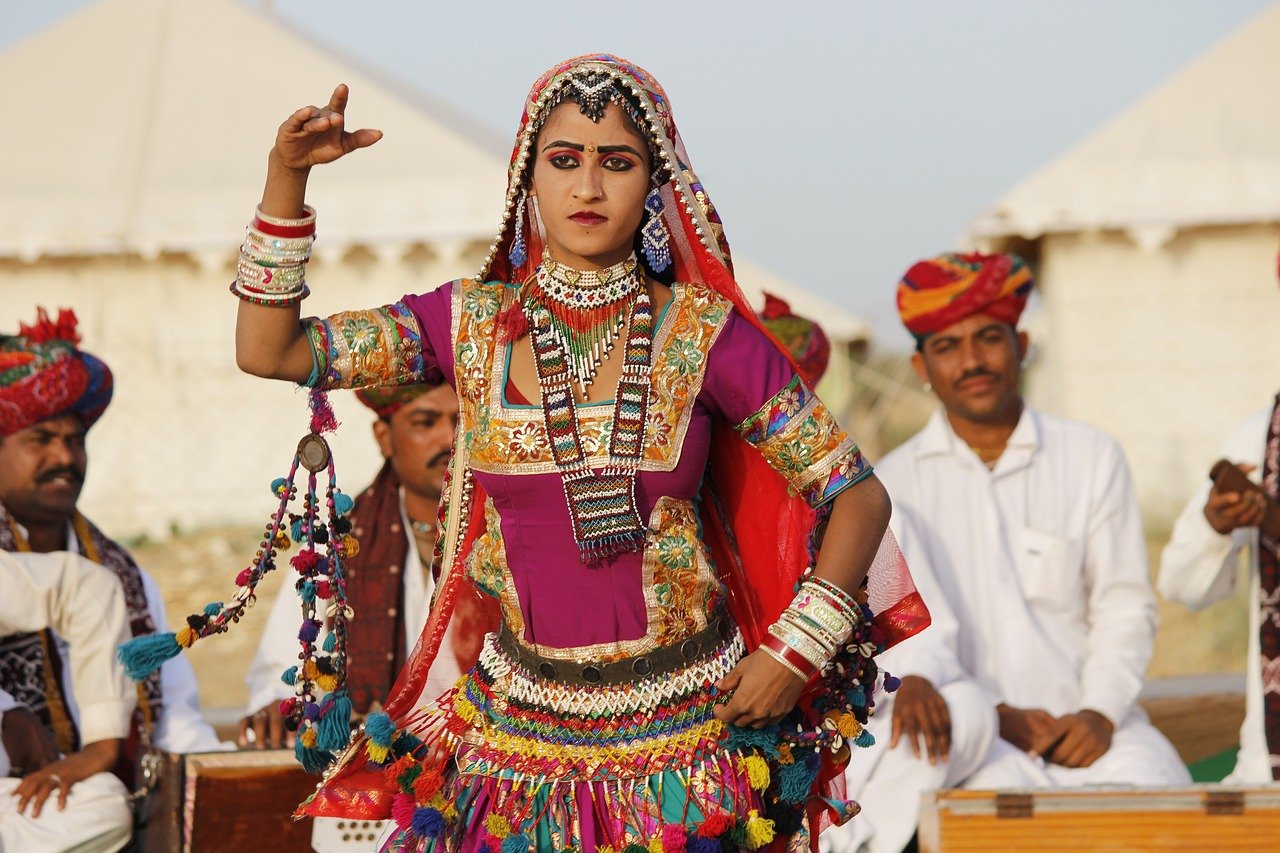 The Choli, Kurti, or Kanchli are equally elaborately styled, as per the requirements of the wearer. Mirror-work into the embroidery adds an attractive quality. Especially when teamed with beads, sequins, and coral shells. All such decorations embellish the garment with the signature of its ethnic originality.

The comfortable veil of Odani, or Chunar, protects the scorching climate of the desert. It is approximately 2.5 meters long and 1.5 meters wide. It is often embroidered with beautiful designs, prints, and beadwork. The woman wears it as what suits her. The traditional style is to tuck one corner into the ghagra, while the rest is taken across the chest and draped over the shoulder or over the head.

The customary attire for the Rajasthani man is the Dhoti, Angarkha, Kurta, and Pyjama. The Dhoti, prevalent across most Indian states, is a long, white cloth, usually of cotton, draped around the waist and tucked between the legs. The Angarkha is a robe-like garment worn along with Dhoti, generally by men of affluent social status. Tribal communities have adapted the attire into their traditional costume, reserving it for festivities and occasions. The Rajput clan wears the long, ankle-length Angarkha. The Puthia, or Angarkhi, is worn for daily use. It is shorter in length and the garment is fitted with the help of laces.

The comfortable cotton Pyjamas are a loosely fitted set of pants, worn with Kurta or Mufti as the upper garment. Traditionally, the Kurta is supposed to be knee-length. However, the modern style and design patterns of the garment vary.

The headgear called Pagari is a mark of cultural prestige among the Rajasthani men. The cloth of the Pagari is two meters in length and about one-fifth meters in width. The style of wearing the Pagari differs according to caste and region. The Safas are specially designed Pagaris which are worn for special occasions, like weddings, and festivals. They are shorter and broader in size and more luxurious than regular Pagaris.

The men also accessories themselves with traditional ornaments. Large bangle-like Balis, ear-studs, and necklaces with crystal beads or semi-precious stones are the customary accessories. Men belonging to families from the higher social strata wear waistbands called Kamarbandh and the Patka. It is a piece of cloth placed over the shoulder.

The traditional footwear of the Rajasthani people is the Jooti or Mojari. These are leather shoes of intricate embellishments and are made of camel, sheep, or goatskin. The traditional style of Jooti is colored black or brown. In modern fashion, however, various multi-colored slip-on is also prevalent.

The costumes of Rajasthan form a brilliant and vibrant ensemble that forms an important part of the identity of a rich heritage. The people, thus, take pride in upholding their tradition.

Get Up and Move With These 4 Trendy Smartwatch Under 5000

The Charm of Indian Ethnic Wear

A Deep Dive into the Lal Par Saree from West Bengal