There are very few festivals that are religious in fervor but incorporate a wide range of social, creative, environmental and political ideas and showcase them on a platform and medium that is artistic, relevant and relatable to people of all religions and caste.

The Durga Puja celebrations that are an integral part of festivities in eastern India, especially in West Bengal and surrounding states is a frenzy of heightened activity and palpable festive earnestness that floods the towns and cities and brings routine daily life to a complete standstill. 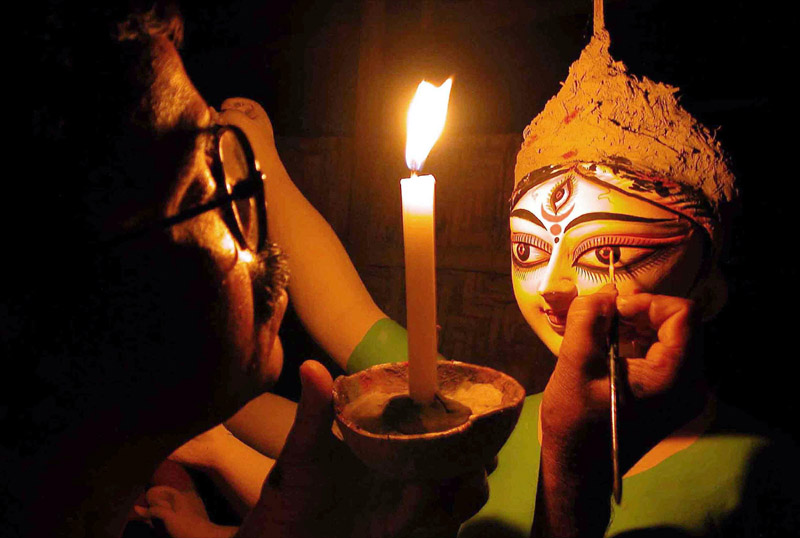 From someone who has grown up in Kolkata, take it from me that Durga Puja is probably the best carnival of sorts that is much more than just a religious celebration of good over evil. It is in fact, a perfect way to highlight, create awareness and make statements about myriad cultural and social elements. Besides, of course, like any other festival, it is the time to shop, catch up, to gorge on food, to socialize with friends and family and to go ‘pandal’ hopping, a term that is used with a dash of excitement and enthusiasm by the locals.

What is Durga Puja?

Popular in the states of West Bengal, Bihar, Odisha, Assam and Tripura, Durga Puja is celebrated in the Hindu calendar month of Ashvin that usually falls in September or October. It celebrates the defeat of the deceptive buffalo demon Mahishasura on the hands of Goddess Durga. Durga Puja is a ten day festival beginning with Mahalaya which is the first day of the Puja celebrations. The sixth day (Shashthi) onwards the real celebrations and prayers commence when the eyes of the deity are painted symbolizing the infusion of life into the clay idol and continue through Saptami (seventh day), Ashtami (eight day) and Navami (ninth day). During these days, along with Durga, Goddess Lakshmi, Goddess Saraswati, Lord Ganesha and Karthikeya are also worshipped. On the tenth day or Dashami amidst the beating of drums and chants the idols are immersed in the ocean or rivers and bid adieu as they are believed to return to their divine abode. Dashami is also the day when women smear each other with vermillion called Sindur Khela.

The last day of the Puja coincides with Dussehra.

How is it celebrated?

Durga Puja is celebrated by organizing pujas in homes and prayers and religious rituals are a part of the ten day festival. However, besides the religious rituals and prayers, Durga Puja appeals to non-Hindus as well, because of the beautiful idols that are created by local artists, using various ideas and materials that are centered in pandals or temporary stages that dot the entire city. Each of these pandals are unique in their art and the message that they wish to convey. The magnificently carved and beautifully dressed idols of Durga and other deities on stage are the work of art, created by artists who pour their skills and reverence into the idols over months. Pujas and rituals are also carried out within the pandals yet they are open for all visitors who come in hundreds to adore the splendid idols, the surrounding decorations and the themed pandal renditions.

Durga Puja involves communities, local ‘paras’, societies coming together, to pool in resources and create something wonderful. The larger than life depiction of the deities, of Ma Durga riding over the astonished and defeated Mahishasura, the petite dignified figures of the other gods and goddesses are poised in the midst of light Rabindra Sangeet, mingled with the chatter of the crowds and lighted with the chants of prayers from the priest. However, the pandals also reverberate with social causes and are exceptional ways to inform and educate the masses that throng to visit them. In many parts the pandals are themed and there are also competitions to vote for the best pandal. Themes range from replicating iconic structures, such as the Buckingham Palace, Big Ben, Jagannath Temple as well as, pandals are also built on various concepts, such as, the shape of a Kerala houseboat, a musical concert or the fictional Mahishmati Palace.

However, many pandal themes and decorations also highlight some of the most pressing social issues, such as, the plight of sex workers, women empowerment, global warming, saving the Ganga and more.

The creativity of the artists and the pandal committees are on full display, when they use environment friendly materials or build the pandal using only chairs, or theme the pandal based on the various watches and time aged clock techniques. The list is endless, as every year; the absolute genius of the creators manifests itself in colorful, beautiful and meaningful work that resonates with the social, cultural and current state of affairs.

Durga Puja is also the time when traditional and cultural arts, including dance forms, music etc. are performed by artists. Many pandals organize cultural performances and shows showcasing the traditional talents and heritage of the state and region.

The most wonderful thing about the Durga Puja celebrations is that though there is usage of technology and modern methods whether it comes to pandal building, thematic representations, using 3D technologies and so on, the traditional essence of the celebration is not lost on anyone. In spite of the grandeur and sometimes, the glitz, the music and the fun, the spiritual divinity is not ignored neither usurped. At the end of the day, the puja is still about the victory of good over evil, the understanding of standing up for right and the conviction to emerge victorious against all odds.

Here is taking a look at some of the traditional martial arts of India. Each of these is not only a holistic art form on its own, but also, is reflective of practices of its place of origin. In other words, these martial arts are rooted in the culture of the land from where they come.
Read more
Art & Culture

Nagaland is a land of many tribe and cultural diversity, and the festivals of Nagaland beautifully portray the harmony and vibrancy of this state. Here is a journey through the numerous and diverse festivals that are part of Nagaland.
Read more
Art & Culture

Urdu language continues to be an integral part of the Indian culture and linguistics. It is widely spoken in many parts of the country. Some of the states where it is predominantly spoken include Uttar Pradesh, Madhya Pradesh, Andhra Pradesh, Telangana, Karnataka, Maharashtra.
Read more
Art & Culture

A glimpse into the beautiful benefits of coconut and all the byproducts that have shaped the culture, heritage, demographic, and gastronomy of India.
Read more
Art & Culture

Let’s take a look at 10 traditional games of India that have defined childhood for entire generations. This list comprises both indoor and outdoor games, and hence, it is beneficial for both physical and mental strength.
Read more
Art & Culture

To understand the absolute diversity and unique culture of Gujarat, we dive into the various aspects that define the state and its people.
Read more
Art & Culture

Harvest Festivals of India – The Planting of Social and Cultural Landscapes

Harvesting festivals of India remind us of how much nature and man work in tandem to create the most basic of necessities for survival. The mutual respect is evident and more so during the harvesting festivals.
Read more
Alternative-lifestyle

The beautiful art forms of Tamil Nadu in India is aptly represented through its culture. The rich heritage and history is embedded deep in the hearts of Indians.
Read more