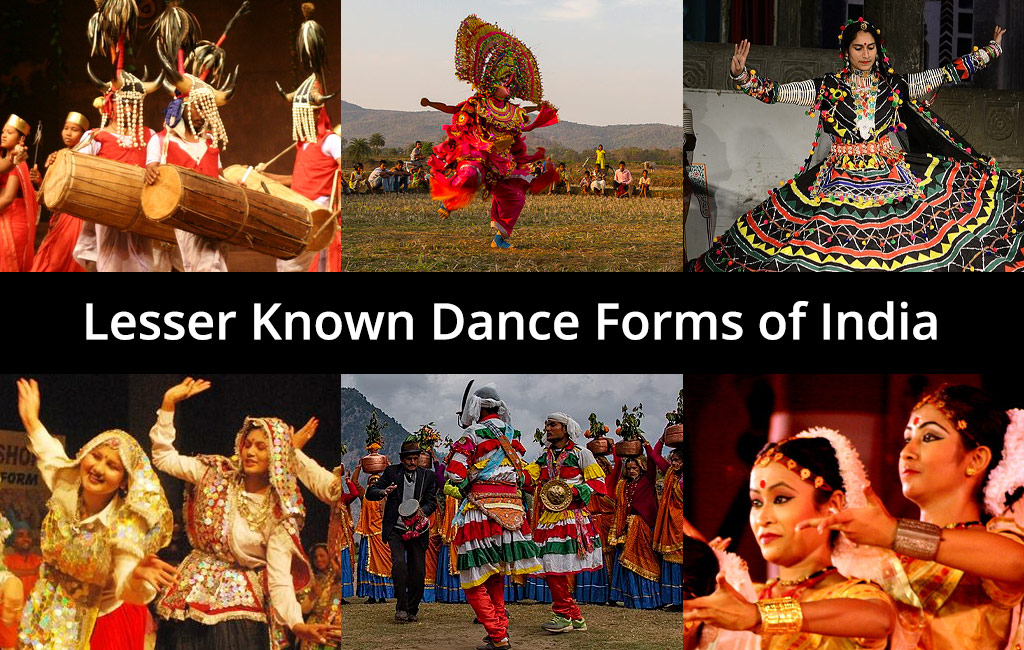 India is a country with the most thriving culture in the world. Dance is one such way of depicting this vast yet unified cultural victory of the country. Occasions and weddings are incomplete without dance. From northern hills to the longest coast of the south, from deserts of west to the highest rain-stricken forests of the east, dance(s) abound all across the country. There are about 144 folk dances present and performed in India at present. However, very few come up to our tongues when talking about the folk dances of the country. There are many other dance forms yet in search of recognition.

Many dance forms are overlooked in the herd of the newly emerging or newly hyped dance forms. Here is a list of ten such lesser known dance forms of India that you might’ve missed on. Let’s dig in! The dance forms mentioned in this list include the folk dances and the cultural or tribal dances prevalent in various parts of the country.

Also known as Bison Dance, the Gaur Maria dance is a prevalent dance form in Madhya Pradesh. The tribal-originated dance form symbolized the hunting spirit of the ancient humans. Bamboo stocks and bison horns make up essential props used in this dance. The male dancers put on cowries’ headdresses while female dancers are adorned with bead necklaces, tattoos, and brass fillet ornaments. Beating drums and tossing horns and feathers of the dancer’s head-gear are the essential and initial steps in this dance. Tallaguda Marias tribe of South Bastar still performs this dance with enthusiasm at fests and functions like marriage.

The tribal Chhau dance is still performed in hilly forested areas of Jharkhand, West Bengal, and Orissa. The dance showcases the Veer Ras, with roots in martial arts. The dance form initially developed as a way of martial arts training. This rare dance form of India adopted the principles of Acharya Bharat’s Nrityashastra. Besides this, the element and connection of Hindu mythology are also evident. The war dance shows reverence to Shaivism, Shaktism, and Vaishnavism and enacts stories of various Hindu epics, including Mahabharata and Ramayana. According to more recent trends, the dance form is directly related to the spring festival Chaitra Parva.

Facial expressions and hand gestures play a significant role in this fold dance. The traditional dance form of Kerala was a primary dance form in temple theatres by the Chakyar community. The headdress worn by the performer represents the thousand-headed serpent- Anantha. It renders mythological stories in the most elegant manner. The two main instruments used in this dance form are Mizhavu and a pair of Ilathalam. The performance carries on with the performers narrating stories from Puranas, spurred with humour and wit. Performed by a single person, it is regarded as one of the most refined monologues.

Haryana’s traditional agriculture folk dance, the Phag dance, is predominant in February and March. Also called Phalun dance, the dance brings joy and leisure to the farmers in the state. It celebrates the harvest of the agriculturalists in the state. The performers sing the traditional song “Phagan Aaya re rang Bhara re”. Mesmerizing feet tapping steps follow them. The rhythmic beats of Daph, Nagara, and Dholak make the performance even more cheerful.

Known as Dashabtar in many parts of the country, this folk dance of Assam was founded by Srimanta Sankaradeva. The Sattriya dance made its way among the top classical dances of India in 2000. The dance form demonstrates neo-Vaishnavism. The male dancing style of Sattriya is called Paurashik Bhangi, while Stri Bhangi is the name given to the female version. Along with this, the dance form involves 48 types of movements. Khols, Taals, and Flute form the basic instrument set used in the dance form.

In 2010, UNESCO recognized the Kalbelia dance form as an intangible cultural heritage. Yet, the dance form makes its way in this list of lesser known dance forms of India as the onset of ‘ghungroos’ and jazz tarnished the popularity of this dance form. The tribal Rajasthani dance form represents the serpent movement with a sheer conscience. The songs were used to disseminate the ancient mythological stories of the tribe Kalbeiya. Although the dance performance is mainly by women, men accompany them with instruments- khanjari and poongi.

The traditional folk dance of Uttarakhand originated in the Kumaon region of the state. ‘Sword Dance’ is another name for this dance form. This name suggests its ties with the Rajput community. The dance depicts the Veera Ras. Like the Chhau dance, Choliya dance too is related to the martial traditions. The dance form is still alive in the Rajput practices. A Rajput wedding in the Kumaon region is incomplete without the performance of the Choliya dance. The song played along with this dance consist of rhythmic beats from brass instruments like Turi and Ransing and percussion instruments like dhol and damau. According to elders, this dance casts away the evil spirits and blooms the seed of goodness.

A pride dance of the valley of Kashmir, Bacha Nagma is a loud and colourful dance form. The historical essence of the dance form lies in its origination. The dance form originated years ago to celebrate the harvest season. The leading dancing group consists of young boys dressed in traditional women’s clothes. The Hafiza dance form highly influences the dance steps. Persian literary ideas also inspire the songs used.

This dance form is a part of the Mizo culture for ages. It is the traditional bamboo dance of Mizoram. Historically, the communities performed this dance to pay respect to the mothers who die during childbirth. It is a performance in the form of a prayer to ensure a safe path to the heavens for the mother’s soul. The two horizontally placed bamboo staves play the first role in the performance. The female dancers perform steps between the bamboos while the male counterparts rhythmically hold the bamboo staves. The Cheraw dance form even got its name inscribed in the Guinness Book of World Records in 2010.

Last on our list is the religious dance form of Maharashtra. The communities perform Dhangari Gaja to please God Biruba. The dance form is appreciably famous among the shepherd, pastoralists, and weaver’s community in the Sholapur district. Poetry accompanies the dance performance. The poems are called Ovi, written in awe of nature by the communities mentioned above. Attired in traditional Marathi dress, the dance form showcases the Maharashtrian roots of the dance form. The dance performance is to pray for the happy and healthy life of their cattle.

Besides these, there are many more dance forms that we often overlook. Owing to India’s regional and cultural diversity, there is an endless list of cultural affluents in the country. Folk and tribal dance forms make up a large part of these cultural affairs. Although, the government and the public are constantly trying to revive the near-extinct dance forms of respective cultures. Youth has a considerable contribution in this pursuit. Documentaries like Bharat Kishore and NGOs like Rupayan Sanstha form a part of the efforts.