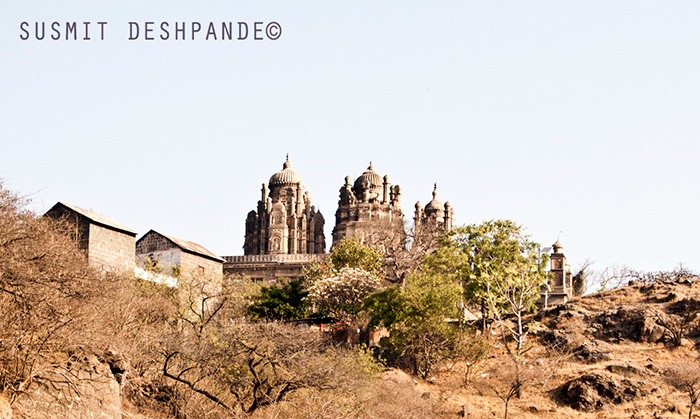 I got to know about a mysterious temple located on a remote mountain on the outskirts of the city of Pune in Maharashtra state. Eager to find out, we headed towards Solapur from the city of Pune, after approximately 40 kilometres on National Highway 9, a small village called Yawat leads us to this elevated location. The Bhuleshwar Temple stands out at first sight because of the colour of the Shikhara – the high tower of the temple – which is entirely different from the colour of the stone of this barren hill, which was once a fort named ‘Mangalgarh’. Few unattended relics on the way prepared us for the mystic offbeat destination ahead and once we reach there, the whole mystery stands before us and we wanted to unravel it! 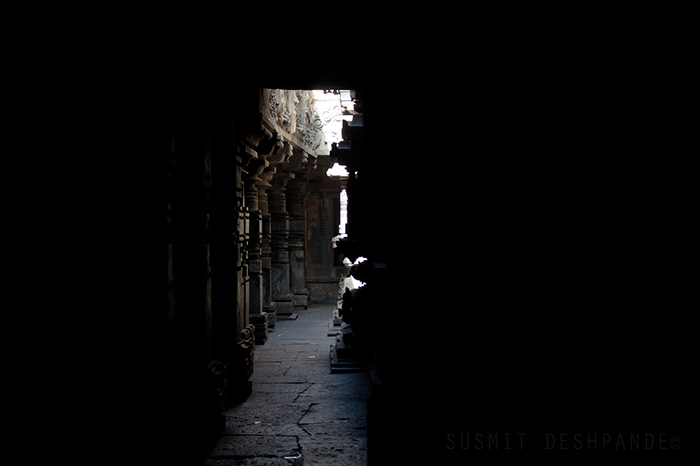 Thrilled by the first glimpse of this magnificent structure, I asked the village dwellers about history of the temple. They told me that long ago, during the medieval period, the Yadava dynasty ruled over the Deccan plateau for two centuries. This period is known for the prosperity of the Deccan region and many architectural marvels were built during this time. The architectural and iconographic aspects of Deccan temples reached their zenith during this period and these are collectively identified as the ‘Deccan style’ – a regional variety of ‘Nagara style’, or Indo-Aryan architecture. This temple architecture is characterized mainly by a profuse decoration of figure sculptures, abundance of lozenge-shaped ornaments, arabesque and pilasters resembling temples of Gujarat and Malwa regions, which were built during the reign of the Chalukyas and the Paramaras respectively. 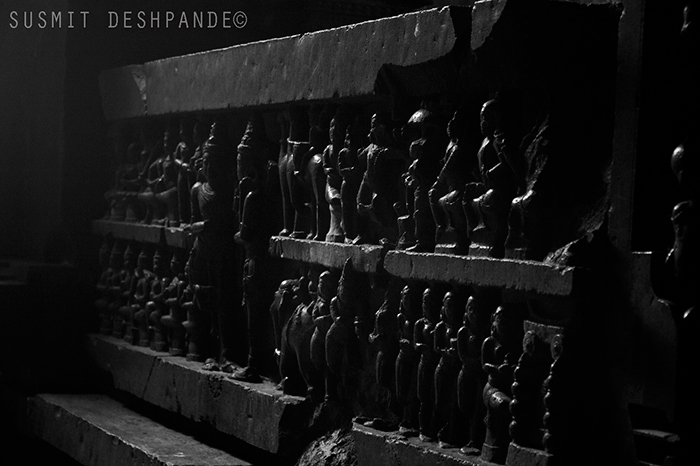 A glimpse of this particular style can be witnessed at Bhuleshwar temple, named after a moniker of Lord Shiva, who is the prime deity. It is situated on a hill in one of the spurs of the Sahyadri mountain range, near Pune. The temple is said to have been built in the late 12th century or early 13th century AD during the reign of King Mahadeva or King Ramachandra of the Yadava dynasty. The exact period remains unknown. It is also said that the place once had a cluster of temples among which, only one has survived today. Interestingly, the style of the temples which were built in this approximate period in the Deccan region is loosely called “Hemadpanthi style”, after the prime minister of Yadava rulers, Hemadpant or Hemadri (1271 AD-1310 AD). 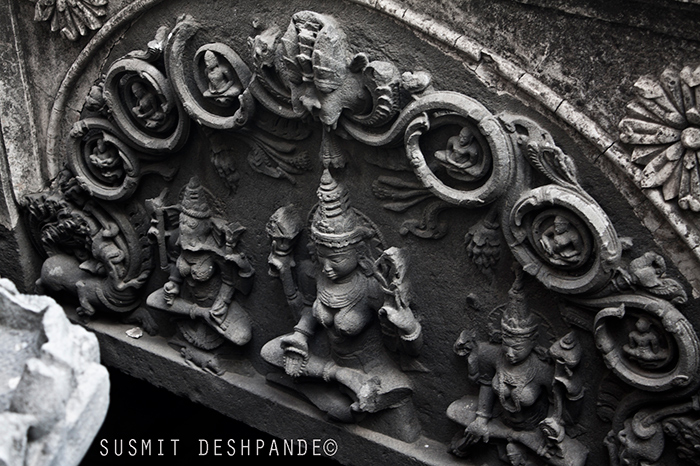 There is clear evidence for the reconstruction of the temple in a later period, probably in late 17th Century. There are differences between the Shikhara where the original temple made of black stone and the two storeyed Nagarkhana – a room made of brick and mortar that is used to store a folk percussion instrument Nagara at the entrance. However, the original construction is almost intact.

The Deccan region in the 17th century was witness to the mighty Maratha Empire, which helped regain the medieval prosperity of this region by fighting against coercive Mughal regime. Fortification of many monuments and heritage sites of the ancient period was provided by the Maratha rulers of this era in addition to their own creations. The repairs and additions to this original medieval temple are attributed to Bramhendra Swami, who was a contemporary of the Shahu, grandson of Chhatrapati Shivaji. 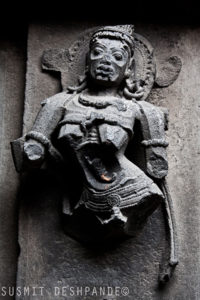 Once we enter the temple through narrow stairs, a large intact Nandi in an independent Nandi Mandapa in front of the shrine seeks our attention. The composition of light here is an interesting phenomenon especially for artists and photographers. It is created by an aisle having ornamental scriptures on the surrounding walls of the Garbhagriha and Antarala on one side and Devkulikas – cells built for various other deities – on the other.

Extravagant carvings of scenes from the Mahabharata, the Ramayana and other Indian epics on the Vedi – dwarf wall – of the Mandapa narrate various stories to us. Sculptures of Saptamatrika – seven mother goddesses from ancient Hindu doctrine – along with an unusual female form of Lord Ganesha called Vainayaki or Ganeshi are found over the cornice of an open part of the cloister.

Every sculpture in this exquisitely decorated monument told us a story – be it a lady with a mirror, or a mridangam, or an ornamental motif, or the goddess Chamunda bearing a scorpion, or the god Bhairava, or a peculiar running variety of hansa (a swan). At the same time, broken and shattered images tell us about the agony of consequent battles between Mughals and Marathas. 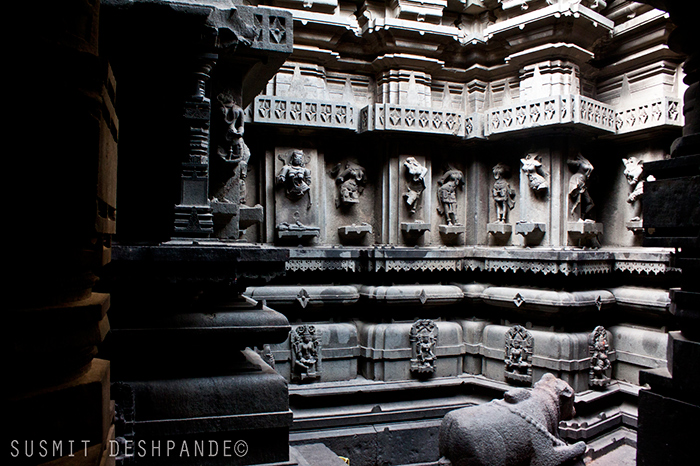 Even after we return to the outside world of antennas and vehicles, we are left with a part of the mystery of this celestial world. Nowadays, this place, once unnoticed, is being commercialized at a fast pace just like other religious place in India. Modern haphazard amendments to the place without any aesthetic perspective can be easily identified. Yet, the Bhuleshwar temple stands out prominently due to its beautiful sculptures and architecture, which restore its important position in the array of Yadava monuments of the Deccan.

Check out our Free eBook on places to visit near Pune.
Factfile –
http://en.wikipedia.org/wiki/Bhuleshwar_Temple
http://bhuleshwar.com/photo-gallery.htm