Across the vast stretches of Indian history, lie some forgotten little towns. These small towns were once the sprawling capitals of mighty empires, but are today lost in the pages of history. Our in-house Ibn Battuta, Anannya Deb has gone across the Deccan to rediscover these gems.

In the period between the waning of the Gupta Empire in the 5th Century till the arrival of Muhammad bin Tughlaq in the 12th Century, the Deccan region served as a revolving door for a series of large dynasties. The Kadambas, the Chalukyas, and the Hoysalas of Karnataka; the Rashtrakutas, the Shilaharas and the Deogiri (Devagiri) Yadavs of Maharashtra; and the Kalachuris, the Ikshavakus and the Kakatiyas of Andhra Pradesh were some of the most prominent ones. 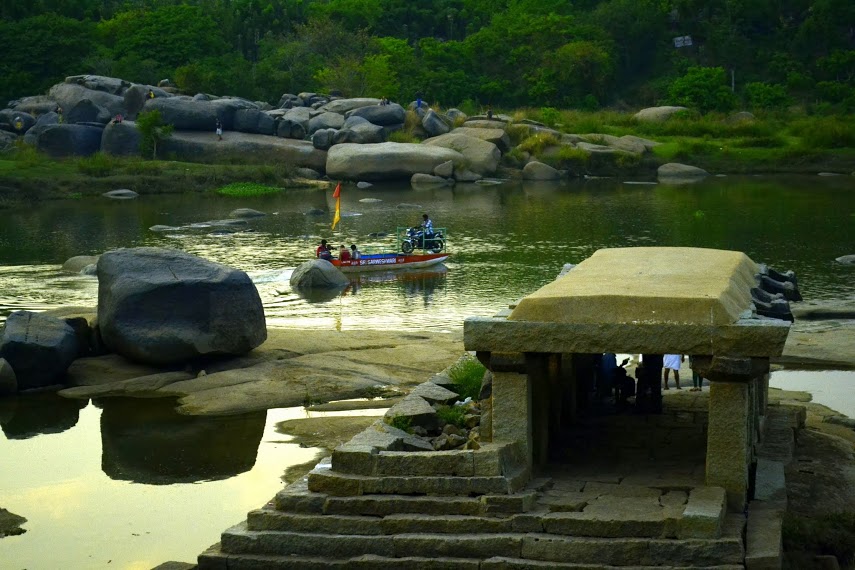 While many of these empires were later subsumed by the succeeding empires of the Bahmanis, the Vijayanagarans, the Marathas, and ultimately the Mughals, the legacy of these empires in art, architecture and culture is immense. To truly understand the scope of these empires, we must necessarily travel to some innocuous looking small towns of the Deccan.

For starters, we could go to Banavasi in the Uttar Kannada district of Karnataka, about 100km south west of Hubli. The tourist literature on most travel sites say this is a base for heading into the forests or to go to the Jog falls. It is even marketed as a rural tourism project with a eco-tourism oriented holiday centre. For a leisure-seeking tourist like me, that is a charm by itself. 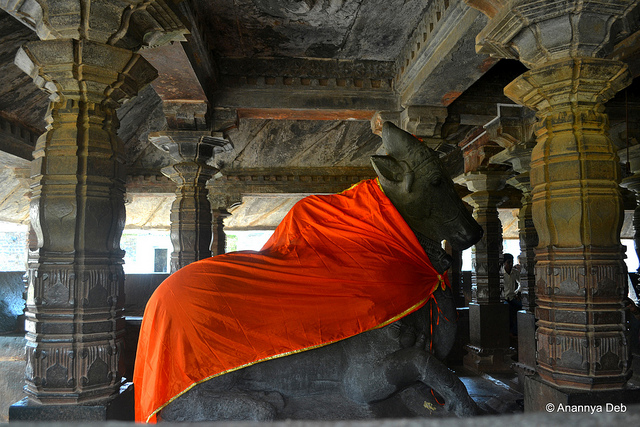 However, for those enquiring into Indian culture, Banavasi is an important place. It is the capital of the Kadambas, the first major empire to spring up in the Deccan region. The Aihole Inscription of Pulakesin II describes Banavasi as “Vanavasi, which for a girdle has the rows of hamsa birds that sport the high waves of the Varada as their play place and which by its wealth rivalled the city of the gods” (Source: Epigraphica Indica, 1901). 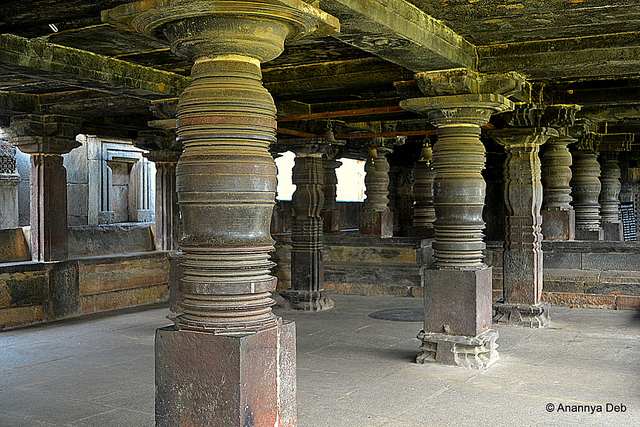 Now inscriptions are known to be hagiographical in nature and hyperbole is an accepted literary quality. However, even discounting the exaggeration, we can reasonably conclude that that this town was fairly wealthy and prosperous as befits a large capital city. And this is how it looks today… 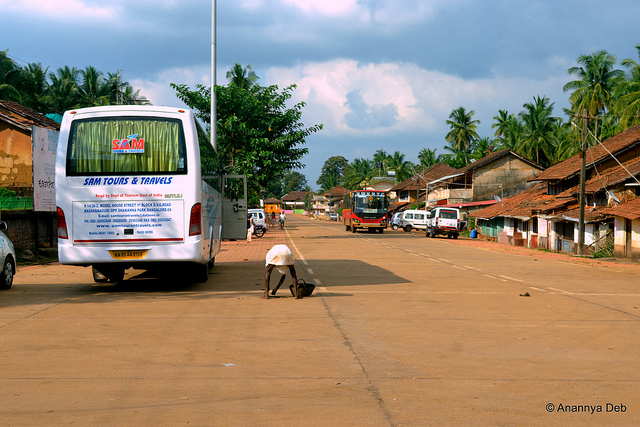 Banavasi looks like any other village with its completely rustic ambience. Anyone passing by would have no idea of its history. Established in 345CE by Mayurasharma, the Kadambas were the first ones to use Kannada as a medium of official administration. The Kadambas were later defeated by the Chalukyans. In the 8th Century, they built the Madhukeshwara Temple, which has been built over many centuries by various dynasties including Chalukya and Hoysala kingdoms. Madhukeshwara Temple has all the typical Chalukyan elements – ornate pillars, the shikaras, etc. however, the dancing hall in the front of the sanctum sanctorum was built during the Hoysala period, which has some exquisite carvings on pillars and on the ceiling.

To understand the Chalukyan legacy, we must visit another small town in Karnataka. Badami located in Bagalkot district – a three-hour bus ride eastwards from Hubli – is a slightly more urbanised version of Banavasi. 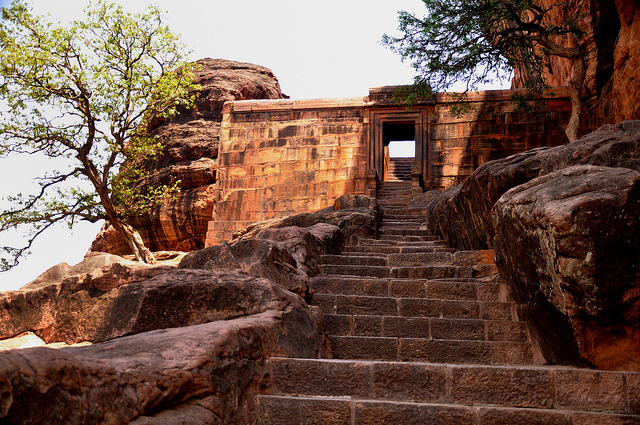 This was where the Early Chalukyas (Badami Chalukyas) led by Pulakesin I established his capital. Vatapipuri, as it was was called then, stands on two rock outcrops on either side of the lake that are named after the Asura brothers – Vatapi and Ilvala. The lake is named as Agastya Tank, which is a reference to a mythological tale, where Agastya a revered Hindu sage neutralised the powers of the demonic brothers.

From a cultural point of view, the Badami Chalukyas were pioneers of temple architecture. All the great classical architecture of temples in the Deccan and southern India owe their origins to the Chalukyan architecture. As many art historians have reckoned, Badami and the nearby sites of Aihole and Pattadakkal were the design studios for sculptors to try out new forms of expression. The temples of Kanchipuram, Mammallapuram, Hampi and many others draw heavily from the Chalukyan style. 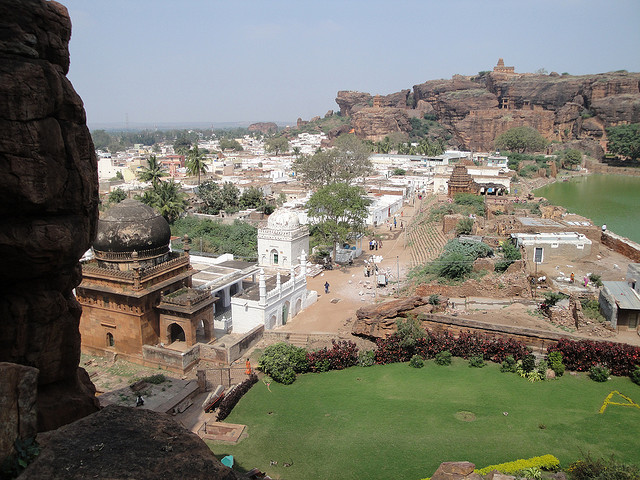 Besides temple architecture, the Chalukyas of Badami brought in another tradition – they wrote many of their royal inscriptions in Kannada. The Kadambas were the first to patronise Kannada as evident from some 5th Century coins found there. But the Chalukyas took it to another level. This marked a breakaway from the traditional seat of honour given to Sanskrit. The inscriptions in Badami dating back to the 6th Century are considered to be the earliest available literature in Kannada. Thus, as historians like Romila Thapar writes in her book Early India, the royal patronage for a people’s language like Kannada marked a new beginning as people could now express themselves without having to study Sanskrit. It empowered the lower castes who were denied access to Sanskrit, to create their own literature, which many centuries later would evolve into the beautiful Bhakti movement poetry.

Endowed with such rich heritage, these two towns – Banavasi and Badami – within their diminutive state hide some important gems in the making of Indian culture. The lost pages of Indian history can be rediscovered in these quaint little lost capitals of the Deccan.

Upper Deck Resort was a dream come alive as I opened the window with sleepy eyes, to a cup of hot coffee and some breakfast dosa and glared at the beautiful view before me
Read more
Offbeat Travel

A sprawling pink hued palace that speaks tales of a bygone era with its regal architecture – the City Palace, Jaipur.
Read more
Nostalgiphilia

Chittorgarh, Rajasthan. Although an important heritage site in India, declared a UNESCO World Heritage Site in 2013, the renown of Chittorgarh is spread far and wide, more so because of the myths and legends associated with its history.
Read more
Offbeat Travel

Sri Lanka, the jewel-shaped country, is a heady and enchanting mix of hills, beaches, abundant greenery, wildlife, and ancient ruins. It has something for...
Read more
Offbeat Travel

Why Kabini is the Most Sought After Nature Destination Near Bangalore

It is no surprise why Kabini is the most sought after nature destination near Bangalore. If you are wondering what we are talking about, keep reading to understand what makes this tributary of India stand apart.
Read more
Offbeat Travel

9 Reasons to Visit Kandima Maldives for a Luxury Weekend Getaway

This is your virtual tour to this lifestyle resort, Kandima Maldives. Here's a list of the top 9 things at Kandima that we indulged in and we recommend you all to do the same.
Read more
Offbeat Travel

Exploring the Heart and Soul of Alleppey

If you ask me to tell me the story about one of my most memorable travel experiences, I would most definitely, without a doubt,...
Read more
Offbeat Travel

With the sole purpose of relaxing with their heavenly spas, picturesque landscape and infinite coastline, I landed with an excited heart drawn in by Bali’s charm Fivelements Resorts
Read more
Offbeat Travel

A 5-day Guide to Exploring Bali

I had the best time exploring Badung, Seminyak and Ubud to my heart’s content. Here is a 5-day guide to exploring Bali which can help you with your Bali itinerary:
Read more