The heritage of culture that the state of Tamil Nadu is replenished with has its essence in cities and towns as well as the remote corners of villages. As diverse, colourful and ornate as the whole of India, the art forms of Tamil Nadu, that owe their roots to ancient times, are practised and performed even today with enthusiasm and devotion. Here we present some of the art forms that serve as excellent representations of Tamilian history and culture.

Bharatanatyam, considered to be the oldest classical dance form of India, was initiated in the Hindu temples of Tamil Nadu and eventually flourished in South India. The theoretical base of this dance form, which is also referred to as Sadir, traces back to Bharata Muni’s Sanskrit text on the performing arts called ‘Natya Shastra’. In Bharatnatyam, anecdotes and stories of Hindu religious themes and spiritual ideas are illustrated by the dancers with gorgeous footwork and impressive gestures. Its performance repertoire includes the three primary aspects of performing arts, namely: the pure dance of Nritta, the slower and dramatic Nritya, and the play or Natya. Adding abundantly to the whole performance, the accompanists include the guru, a vocalist or ‘nattuvanar’ who usually conducts the whole performance, music composed by instruments like cymbals, a long pipe-horn called ‘nadaswaram’, a drum called ‘mridangam’, the string instrument ‘veena’ and flute.

The Bharatanatyam costume worn by the performers resembles that of a Tamilian bride. A sari is well-complemented with traditional jewellery that includes the ornamental belt worn around the waist and the ‘ghungroo’ bells around the ankles. The eyes are especially highlighted in the prominent face make-up, and the feet and fingers are often brightened with henna colour so that the expressions and gestures can be viewed and perceived clearly by the audience.

A group dance performed by young men, Puli Attam embodies the grace and ferocity of the predatory tiger. With attentive details, the local artists paint the dancers’ bodies in yellow, with black stripes or dots, sometimes with darker shades to resemble the eerie presence of the panther. The performers wear headgears with ears, fangs and tongue, paws tipped with claws and even a long tail as part of the costume. Exuberant and bombastic music played on drums and other traditional instruments, add to the glory of the performance which portrays the fearful and tenacious nature of the tiger.

Inspired and derived from the Puranas, the Mahabharata and the Ramayana, the street theatre of Theru Koothu is mainly performed in the villages of Tamil Nadu. The narrative and dialogues are considerably improvised and songs and music prevail through most of the performance. The play is led by a Sutradhara or director called ‘kattiakaram’ and includes the ‘komali’ who entertains the audience with his buffoonery. Most of the melodies are based on Carnatic Ragas, played across an orchestra of instruments including drums, pipes and cymbals. The costumes and makeup of the actors are flamboyant and extravagant, with vivid colours used to paint the faces of some of the characters, and ornamental designs flourishing the headgear, jacket and lower garments. The classical ‘lokadharmi’ mime is incorporated for the acting technique and the scenes often include enactment of gore and violence.

Originated in the southern region of Tamil Nadu, Oyilattam is a folk dance performed during festivities and important occasions. Initially only performed by men, Oyilattam requires the performers, with colourful kerchiefs or flags held in their hands and bells tied around ankles, to move to the rhythm and melody of the percussion instrument Thavil. The dance boasts of powerful and intricate leg movements and its rich heritage brings royal patronage as imperative support. Performed with enthusiasm and beauty, the primary themes of the dance is derived from the ancient epics of Mahabharata and Ramayana and divulges knowledge and wisdom that are passed on to the audience.

The Bommalattam puppet show of Tamil Nadu is one of the oldest forms of story-telling and is associated with religious festivities, auspicious ceremonies as well as the welfare of the community. In the earlier days, it was used to narrate religious stories depicting ethical and moralistic values. During the freedom struggle, the puppet show served as an effective vehicle that spread the zeal of nationalism. The Bommalattam show is manipulated by strings and iron rods that are tied to the limbs of the puppets. The puppets on their stage are seen through an opening roughly about four metres in height. They are manoeuvred by skilled players who have the other end of the strings or wires tied around their fingers and stand behind the stage, away from the eyes of the audience. The performances usually last for a little more than a week, often continuing overnight. The large, heavy Bommalattam puppets are the most articulate of all traditional Indian marionettes and are usually made of cloth, leather or wood, among other materials.

Based on the dexterous use of weapons and Indian martial arts technique, training for Silambattam begins with honing the physical agility and strength of the performer. The body must be conditioned to endurance and stamina and focus is given upon improving requirements for battle like flexibility, hand-eye coordination, kinesthetic awareness, balance and speed. The primary weapon used is the bamboo staff, whose length is devised based on the height of the performer. Other important weapons used in Silambattam include the Maru for thrusting, the sickle called Aruval, the whip or Savuku, the sword Vaal, the knife or Katti, and the cudgel or Sedikuchi. The graceful and combative Silambattam dance form infuses subtle teachings of discipline, presence of mind and comradeship among other spiritual upliftments.

The elaborate dance-drama of Bhagavata Mela has evolved in modern times to incorporate the forms of both Kuchipudi and Bharatnatyam, like sophisticated gestures, painstakingly intricate leg movements and the elegance and grace of expression to communicate a story by abhinaya. The Bhagavata Mela comprises the three primary aspects of performing arts, Nritta, Nritya, and Natya, as stated in the ‘Natya Shastra’. The gestures and expressions of Bhagavata Mela, symbolic and moving in sync with the Carnatic style of music, convey the sentiment and emotion or ras, and the psychological state or bhava of the underlying story, which is generally derived from the great epics and the Puranas. The ensemble of instruments to aid the repertoire includes the mridangam, cymbals, flute, the string instruments and the harmonium.

A dance of joy and merriment sounded with the jingles of ankle-bells or silambu, the Kai Silambu Attam is performed during the Amman festivals and Navratri. The dance expresses reverence to all female deities, especially the fierce warriors like Kali and Durga.

Devarattam, believed to be the ‘rendition of God’, was performed in the courtyards of ancient kings and soldiers when they returned home after a glorious battle. Now it is performed during religious and cultural ceremonies, along with the musical accompaniment of the Urmi Melam, the Thappu Melam and the flute. In their vividly coloured clothes and with their handkerchiefs for props, the dancers embody intricacy and dexterity in their fluid, enthusiastic movements and bring excitement and joy to the occasion.

The performers of Mayilattam, or the peacock dance, dress in costumes from head to toe that are replete with movable beaks and elegant plumes, to pay tribute to Lord Subrahmanya’s most sincere attendant, the peacock. Mayilattam is an extremely difficult form of art that requires unfaltering focus and exquisite skill. The dancers attach a piece of wood to each of their feet and execute the gliding movements of the bird, imitating its graceful style. This artistic dance is usually performed in Murugan temples.

Performed to revere and praise the rain goddess Mariamman, the dancers in Karakattam balance pots on their head and move to the rhythms of folk Carnatic music to portray the greatness of the goddess. Two types of the Karakattam are widely recognised, the Aatta Karakam, embodying joy and happiness and performed as cultural entertainment, and the Sakthi Karakam, which is a performance of worship and spiritual offering.

This traditional dance form (also called ‘The Burden Dance’) is a special form of sacrifice or offering dedicated to Lord Murugan, the Hindu God of War. Performed solely by men, the dancers are expected to carry Kavadi or burden which can even be a pot of milk on the end of a pole, through the pilgrimage. The roots of this dance form go centuries back when the Tamilians would embark on long pilgrimages. To fight monotony, they began writing songs and dances which eventually culminated into Kavadi Attam. 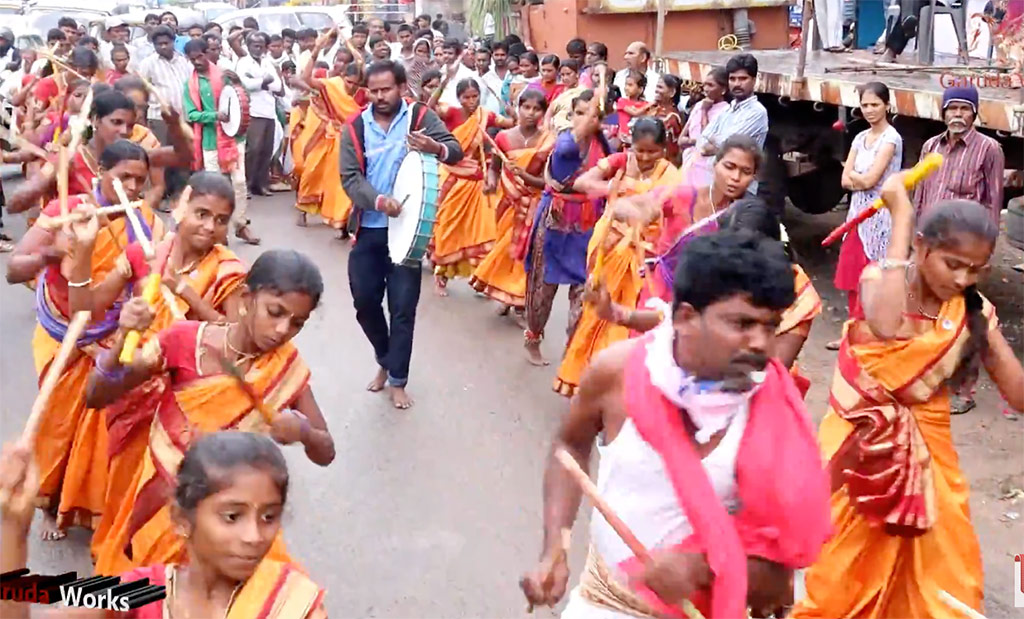 This ‘stick dance’ is performed by women during festivals and weddings. This unique dance entails a group of women holding two sticks in both hands accompanied by rhythmic sounds. Originally this dance form was performed by women, however, over the years men too have joined in and participated. Also performed in Andra Pradesh, this folk dance is a perfect combination of entertainment and precision.

Emerging from the Telugu word ‘Kommai’, which translates to dancing with clapping of hand, Kummi is an age-old practiced dance form prevalent in the villages of Tamil Nadu. It is performed without any music and relies solely on the clapping of the hand as a substitute for musical instruments (there are vocalists). This folk dance is usually performed by women moving in slow circles. The slow speed of the dance is meant to symbolize the harvest period. Kummi is a joyful dance that is done at festivals, during harvests and reunions.

As seen above, Tamil Nadu has numerous note-worthy and mesmerizing dances which form an integral part of their culture and traditions. The significance of dance in their lives is evident from the fact that they have varied ways of expressing their interests in the form of dance. Indeed, such fascinating traditions give us a lot to learn from and a lot to think about.